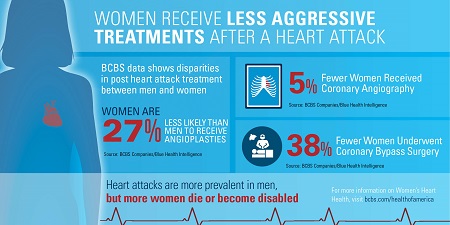 Heart disease is the leading cause of death for women in the United States, killing nearly 300,000 women a year—that’s 1 in every 4 female deaths. While these trends are well-documented by the public health and medical communities, the risk is still not well known or accepted by the general public. According to the Centers for Disease Control and Prevention (CDC), just 54 percent of women recognize that heart disease is her greatest threat.

Findings from Across the U.S.

Despite its deadly and costly toll of $312 billion, cardiovascular disease continues to be perceived as “a man’s disease,” a perception proven wrong again and again by emerging health data analyses, which serve as important reminders of the critical differences between men’s and women’s health.

One such analysis from the Blue Cross Blue Shield Association and Blue Health Intelligence, “Disparities Identified in Post Heart Attack Treatment between Women and Men,” looked at 2014 claims data for more than 43 million members between the ages of 18 and 64. The report identifies some key differences between men and women when they experience a heart attack.[1]

These findings are a critical reminder that there is a real need to understand the differences between males and females with regard to heart disease and many other conditions, to do a better job educating women about heart disease and how to prevent it, and to encourage the medical community to support women and eradicate the perception that heart disease is a man’s disease.

Encourage and invest in sex-specific research. The lack of gender equity in medical research is a real problem, and we know that critical studies excluded women for decades. This is especially true of heart disease research.  While we have known since 1984 that more women than men die each year from heart disease, still to this day, only 35 percent of participants in heart-related studies are women, and nearly 75 percent of cardiovascular clinical trials do not report sex-specific results. Using research that is skewed to male physiology and biology is exactly what puts so many women at risk for incorrect diagnoses, misinformed treatments, sickness and even death.

While the concept of sex-specific research is not universally accepted, many are taking steps to enhance the idea, including the National Institutes of Health (NIH). In fact, the National Heart, Lung and Blood Institute’s Women’s Health Initiative is examining the relationship between the identified metabolomics profiles and clinical parameters (such as blood pressure, waist circumference and BMI), biomarkers (including markers of lipoproteins, inflammation, endothelial function and insulin resistance), and other genomic data, and how they specifically affect women’s health. It is also expected that the NIH’s Precision Medicine Initiative, a national initiative announced by President Obama earlier this year, will include a comprehensive 1 million-person cohort to address these and other key research questions.

Educate women and their physicians about differences in heart disease symptoms. Heart disease often looks very different in women than in men because their hearts are biologically different, and their symptoms—fatigue, shortness of breath or nausea—are more subtle. The lack of awareness among women and physicians about these differences can often lead to misdiagnoses and untreated disease. Physicians may find that tests that reliably pick up signs of heart damage in men do not always work in women, such as simple blood tests, exercise stress tests and standard angiograms.

Community partnerships and public awareness will be essential to spreading the word about women’s heart health. For example, The Women’s Heart Alliance, WomenHeart and the American Heart Association have included in their advocacy efforts initiatives to improve the cardiovascular health of women in high-risk communities. The Women’s Heart Alliance launched Fight the Ladykiller™, a nationwide campaign that encourages women to talk to their healthcare providers and to ‘#GetHeartChecked.’ It also encourages the medical community to proactively address the screening, diagnostic and therapeutic differences and to talk to patients and peers about women’s heart health.

Leverage local health data to identify sex-specific trends and share best practices. As gathering and analyzing health data becomes common practice for health systems, provider groups, hospitals and health insurance plans, using such data to examine male and female differences in treatment patterns would be a significant addition to the current body of biomedical research. Gathering such data could also contribute to building a wealth of best practices that may be helpful to women, but also women of certain age groups, race and ethnicities, or even socioeconomic groups. For example, these practices could be turned into a patient checklist or set of provider protocols that could be put in place to help educate women and cultivate a culture of prevention and informed decision-making.

What studies like this one teach us is that even in today’s environment of breakthrough technologies and life-saving treatments, we are not doing enough to understand variabilities in practices that could impact women’s lives. We must invest in medical research that represents women more equally and emphasizes sex-based analyses to identify unique markers, symptoms and health needs. We must continue to educate women about the risk of heart disease and emphasize the need to get their hearts checked, ask their providers the right questions, and get treated effectively. And we must continue to leverage the power of health data as a vehicle for change that can help us uncover the often elusive differences between women and men, not only through heart disease but all diseases. If we continue down this path of resolving disparities between the sexes, the result will be a healthier generation of women and men alike.

Editors Note: This article appears on the Health Affairs Blog.

[1] This report examines 12 months of unadjusted commercial medical claims incurred during 2014, including FEP, group, and individual coverage.  The population for the study included 43,535,187 members, ages 18-64, defined as patients per 1,000 members. Mortality is defined as deaths per 1,000.  The findings are unadjusted rates for age and geography.