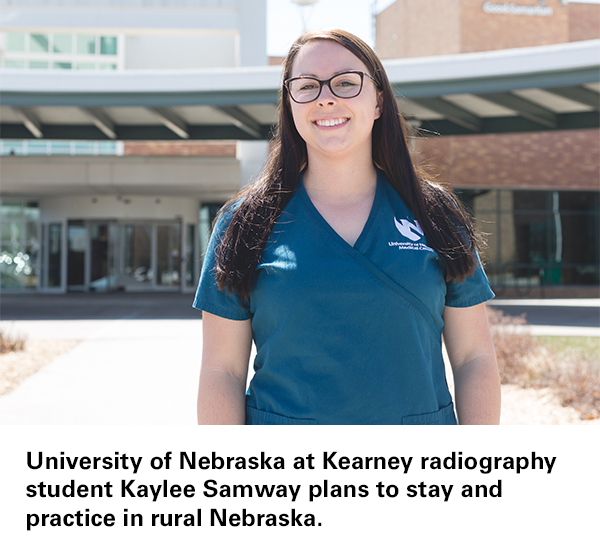 Kaylee Samway has nearly finished her radiography training at the University of Nebraska at Kearney – smack dab in the middle of a mostly rural state. She’ll be able to operate an MRI and other high-tech imaging machines. She could find a job in bigger cities like Lincoln or Omaha. But her roots are rural. And she wants to keep it that way. That makes her unique when it comes to addressing a shortage of rural doctors and hospitals. No one has to try to entice her to move to rural Nebraska. She’s already there. And she loves it.

She’s seen how tough it can be for people from towns like McCook, Nebraska, where she grew up, to access healthcare. She knows residents who’ve had to drive 50 or 70 miles to the nearest doctor’s office just for regular, preventive care. “Even some of the patients that will come from further out west to Kearney, sometimes it gets to the point where their disease has progressed so far,” says Samway, “it could have easily been addressed to start with if they had seen their doctor more often.”

So Samway wants to help bridge that gap for rural Nebraskans. And that’s where a new partnership between Blue Cross and Blue Shield of Nebraska and the University of Nebraska at Kearney comes in. Medical students often stay and practice where they train. But Samway is just one student committed to staying local. How do you find more and convince them to stay? Listen to our story, from the heart of Nebraska.