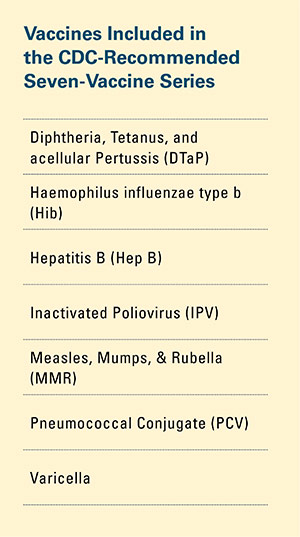 Childhood vaccination is considered one of the top public health accomplishments of the 20th century.1,2 In this new report, the Blue Cross Blue Shield Association, in partnership with HealthCore and Blue Health Intelligence (BHI), examines early childhood vaccination trends for U.S. commercially insured children. The report looks at claims data for children in four birth cohorts (those born in 2010, 2011, 2012 and 2013) and follows their care continuously from birth through 3 years of age.3 This study focuses on completion rates of vaccines in the Centers for Disease Control and Prevention’s recommended seven-vaccine series for children between the years 2013 (by which time the vaccines should have been completed for the first birth cohort) and 2016.4,5,6 (See Appendix A for details on the seven-vaccine series and other CDC-recommended vaccinations and Appendices B and C for specific study methodology.)

This study finds early childhood vaccination rates increased steadily over time. However, wide variation in vaccination rates exists throughout the country at both the state and local levels. Missed well-child visits are a primary driver of under-vaccinated children. 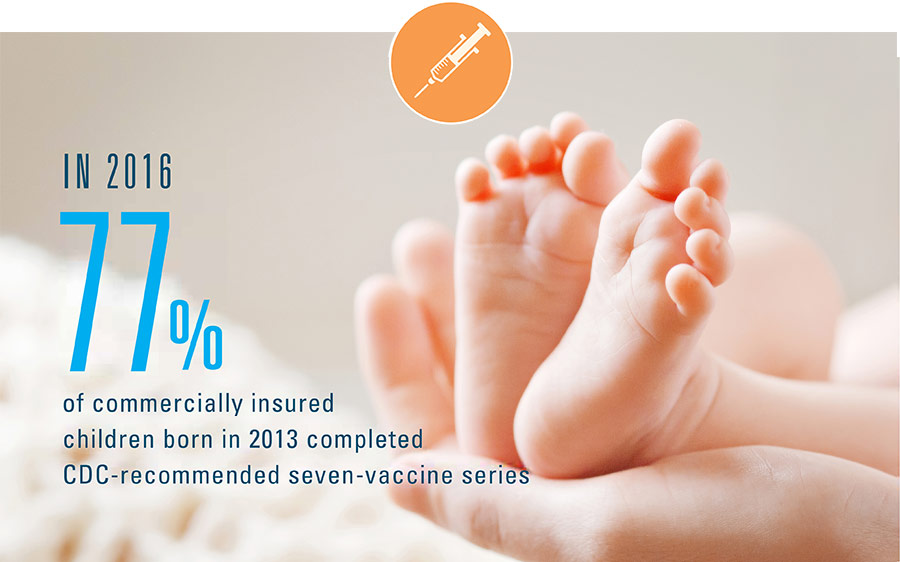 Despite these improvements, some vaccines remain below the CDC and WHO recommended levels to ensure herd immunity in the population.7 For example, diphtheria may need vaccination rates as high as 86 percent, and pertussis and measles as high as 94 percent, to ensure herd immunity. The vaccine rates (DTaP and MMR) for these diseases are currently 83 percent and 91 percent nationally, respectively. (See Appendix D.)

State-level completion rates for children born in 2013 (based on data collected through 2016) ranged from a high of 86 percent in North Dakota to a low of 63 percent in Nevada (see Exhibit 3).8

Rates of Vaccine Refusals
Among all children, the proportion with one or more documented parental/guardian vaccine refusal increased from 2.5 percent for children born in 2010 to 4.2 percent for children born in 2013 (see Appendix E). Refusals for the 2013 birth cohort are spread fairly evenly across all of the seven vaccines in the CDC-recommended series. This spread suggests that no single vaccine is more likely to result in a refusal than any other vaccine (see Exhibit 4).9

Documented parental/guardian vaccine refusal rates also vary by state and MSA (see Appendix E). Higher rates of refusal are found in the Northeast—particularly the New York City area—and in the Pacific Northwest, while lower rates are found in the South and Midwest.

Reasons for Under-Vaccinated Children by Age 27 Months
Overall, early childhood vaccination rates are strong nationwide and increasing in recent years, yet there remains opportunity for improvement in many areas. Reasons identified in the data for under vaccination in children (those who fail to complete their seven-vaccine series by age 27 months) are presented in Exhibit 5.10

This report, sponsored by the Blue Cross Blue Shield Association, in partnership with HealthCore and Blue Health Intelligence, demonstrates that early childhood vaccination rates are on the rise nationwide but there is room for further improvement. While the national rate of fully vaccinated children grew, there is still significant geographic variation. Missed well-child visits appear to be the largest reason for under-vaccination among children from birth to age 2 years 3 months. This study suggests continued awareness, education and compliance with the recommended well-child visits could improve vaccination rates. Administration of the seven-vaccine series will sustain improvements in vaccination rates of children in America.

This report focuses on the seven-vaccine series as the definitive CDC summary measure of childhood vaccinations. The CDC also recommends two vaccinations for Hepatitis A, two or three for rotavirus (depending on the manufacturer of the vaccine), and the seasonal flu shot to be given by age 18 months (24 months in the case of the Hepatitis A vaccine)

This is the seventeenth study of the Blue Cross Blue Shield: The Health of America Report series, a collaboration between the Blue Cross Blue Shield Association and Blue Health Intelligence, which uses a market-leading claims database to uncover key trends and insights into healthcare affordability and access to care. Analysis was performed by and also includes medical claims data from HealthCore, a wholly owned and independently operated health outcomes subsidiary of Anthem, Inc.

This study looks at medical claims for services taking place between January 1, 2010 through December 31, 2016. Children with three years of continuous medical eligibility in a commercial BCBS plan were included in the study as summarized below:

Total sample size (the number of children contributing data to the childhood vaccination rates) was 843,610 children.

Children are counted as fully immunized with the series or individual vaccines as long as they receive the needed vaccine(s) by age 27 months, allowing nine months of buffer time for parents/guardians running behind schedule to take their children to their physician to receive their vaccines.

The report does not capture members who will receive the childhood vaccines after 27 months of age or members who received vaccines from a free public or private local program that does not generate a medical claim.

For more information and to read past reports from The Health of America Report series, visit www.bcbs.com/the-health-of-america.

Data Exclusion
Data from Anthem BCBS were excluded from California because of the prevalence of capitated payments to primary care providers, reducing the incentive for providers to submit claims for primary care, and under representing vaccination rates in that state. Additionally, in several cases, insufficient sample sizes resulted in the exclusion of certain states or metropolitan statistical areas from the reporting of results. Sample size minimums exclude the reporting of results from Alaska, Hawaii, Montana, South Dakota, Washington D.C. and Wyoming and select metropolitan areas.

The vaccination rates in the report use different data sources and different methodology and have no direct connection to the HEDIS measurements published by individual health plans. HEDIS measures rely on multiple sources including medical records and state immunization data, whereas this report relies on claims data to ensure consistency across all areas of the country. Moreover, HEDIS measures are health plan or product-specific, while the measures in this report look at the entire BCBS commercially insured population and are reported based on the child’s state of residence. See below for a detailed comparison with HEDIS measures. The report also does not capture vaccinations that may be administered without a medical claim through public health departments and local programs.

+ Documented refusal rates are based on all ten CDC-recommended vaccines for early childhood.