Pregnant women in the United States are more than twice as likely to die from complications related to pregnancy or childbirth than those in most other high-income countries in the world.1 Rates of severe maternal morbidity (SMM) have been increasing among all women. But behind these statistics lie racial disparities in SMM rates and their risk factors, such as bleeding disorder, diabetes and heart disease.

This study examines variations in many of these SMM rates, as well as the most common risk factors for those events, between white, Black and Hispanic communities. We include hospital births covered by Blue Cross and Blue Shield commercial insurance from January 2018 to October 2020.

Since 2018, rates are on the rise overall, with Hispanic women seeing the highest increase of 19%. Although Black women saw a modest decrease in 2020, they have much higher SMM rates compared to women in majority white and Hispanic communities.

Compared to majority white communities, women in majority Black and Hispanic communities have higher prevalence rates for nearly all SMM indicators examined such as kidney failure, sepsis, shock and eclampsia.

4. BLACK AND HISPANIC WOMEN ARE MORE LIKELY TO HAVE RISK FACTORS FOR SMM

Severe Maternal Morbidity, or SMM, measures unexpected outcomes from labor and delivery with significant short- or long-term consequences to a woman’s health.2 The Centers for Disease Control and Prevention categorizes SMM by 21 different adverse events, known as “indicators”.3 In some cases, an SMM indicator can be associated with maternal death.

SMM RATES OVERALL ARE HIGHER FOR BLACK AND HISPANIC WOMEN

Exhibit 3: Prevalence Rate (per 10,000) and Differentials between Majority Black, Majority Hispanic and Majority White Communities for the Most Common SMM Indicators, 2020*

*Only indicators showing a disparity across communities are shown.

RATE OF RISK FACTORS5 FOR SMM VARY BY RACE/ETHNICITY

Certain factors, such as hypertension and anemia, raise a woman’s risk for SMM events. Major racial/ethnic disparities exist for these factors, as well. To quantify the risk, we calculated a risk ratio, meaning a measure of how much more likely an SMM indicator occurs among those with a particular risk factor versus those without. For example, women with preexisting diabetes are three times as likely to have an SMM indicator as women without.

Exhibit 4: Common Factors with the Highest Risk Ratios for SMM for Women Overall6

Among the most common risk factors (those occurring in at least 1 in 200 deliveries), cardiac disease, bleeding disorders and preeclampsia with severe features had the highest risk ratios for SMM. 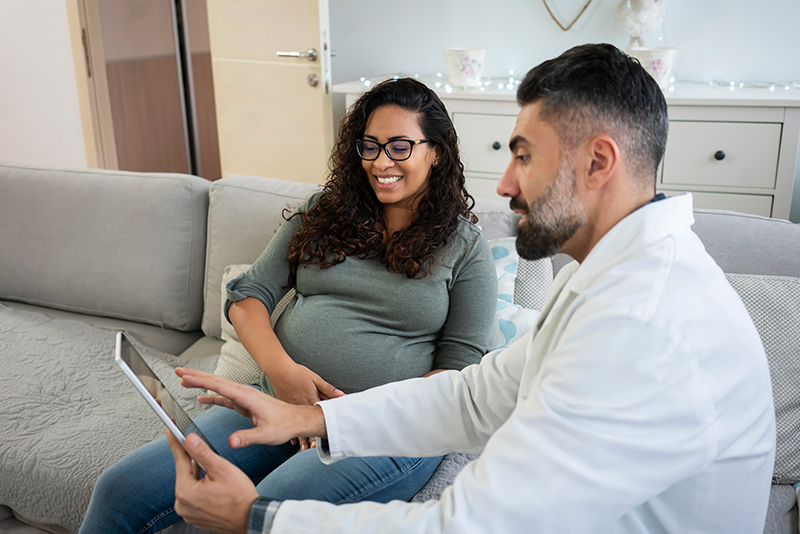 Preexisting diabetes was 38% more common among women in majority Hispanic than majority white communities. Women in these Hispanic communities also had marginally higher rates for a number of other risk factors including gastrointestinal disease, preeclampsia and anemia (see Exhibit 5).

SURVEY: WHAT BLACK, HISPANIC AND WHITE WOMEN SAY ABOUT THEIR PREGNANCY AND CHILDBIRTH CARE7

The type and quality of care a woman receives while pregnant, during childbirth and after giving birth can impact a woman’s likelihood of experiencing SMM. The racial disparities in SMM rates and the risk factors for SMM suggest that women of color may experience pregnancy and childbirth care much differently than white women.

To learn more about these experiences, we conducted a survey in April 2021 of 751 women between the ages of 18 to 40 who were pregnant or had a biological child under the age of one. The survey results show that, compared to white women, Black and Hispanic women may not be receiving the kind of care necessary to manage their risks for SMM.

A CALL TO ACTION

Health disparities are the result of a complex fabric of social, racial and economic injustice—a fabric we can’t unravel overnight. But Blue Cross and Blue Shield companies are taking immediate and ongoing action to put an end to these inequities. Our first focus is on racial disparities in maternal health. As this report shows, these disparities are wide across all age groups, for SMM rates as well as the risk factors for those events. Many BCBS companies have started the work to reduce these disparities and prevent dangerous and tragic outcomes. That includes identifying women at risk and providing one-on-one coaching to manage their chronic conditions during pregnancy, addressing underlying social needs that have a significant impact on health and providing community support, such as doulas, to mothers throughout their pre- and postnatal journeys. We welcome public health experts, policymakers, community advocates, providers, industry leaders, employers and others to join us in this fight for health equity.

Please learn more about our efforts at bluehealthequity.com.

This is the 35th study of the Blue Cross Blue Shield, The Health of America Report® series, a collaboration between Blue Cross Blue Shield Association and Blue Health Intelligence (BHI), which uses a market-leading claims database to uncover key trends and insights in healthcare affordability and access to care.

HOW WE CONDUCTED THIS STUDY:

Severe Maternal Morbidity (SMM) was estimated using the Centers for Disease Control and Prevention’s 21 defined indicators.3 The indicators were identified using claims from 2.2 million hospital deliveries occurring from January 1, 2018 to October 31st, 2020. Blood transfusion was excluded from the report since many blood transfusions are not truly indicative of SMM, but often less severe in nature.8 The rate of SMM includes the rate of SMM indicators present per 10,000 delivery hospitalizations. A woman can experience more than one SMM during a delivery hospitalization.

Race/ethnicity is determined by ZIP code when more than 50% of the households identify as either Black, Hispanic or white. This ZIP code data is from the 2017 American Community Survey (ACS). The estimated number of pregnancies occurring in each community category are: white 612,000; Black 30,000; and Hispanic 46,000.

Risk Ratios of Most Common Risk Factors for SMM by Community Race/Ethnicity, 2018 – 2020 Combined

Achieving health equity means everyone feels heard and respected in health care settings. Blue Shield of California is amplifying one of the most powerful voices, tennis star Venus Williams, to inspire women to advocate for themselves.
Share
Read
Article

In 10 years, Baltimore cut its infant mortality by nearly 30%. It's an incredible success story. But there's more work to do as the initiative B'more for Healthy Babies enters its second decade. Substantial racial disparities persist between Black and white infant and maternal health. In this episode, we visit the communities hardest hit by those disparities and learn how this massive, grassroots effort is turning the tide.
Share
Read
Article

The National Association of Black Journalists webinar on May 19, BCBSA will preview The Health of America Report® on "Racial Disparities in Maternal Health" and host a discussion with health equity leaders on the current state of racial disparities in healthcare.
Share
Read
Featured Topics
Affordability(55)
Opioids(31)
Palliative Care(5)