Getting at the root cause of maternal health disparities

In Guilford County, North Carolina, community health professional Danielle Deshazor, MPH, focuses on reducing infant and maternal mortality. Her work involves making sure women receive the care they need before, during and after pregnancy. She understands the obstacles women in her region face when it comes to having a healthy pregnancy, and she believes one of those obstacles is implicit bias.

Implicit bias is an unconscious attitude or assumption we make about people based on stereotypes. We may have held these biases for so long we’re not aware of how they influence our actions. In health care, implicit bias may influence actions that have unintended consequences.

So when the largest insurer in the state, BlueCross BlueShield of North Carolina, decided to sponsor implicit bias training, she signed up. The training, “Awareness to Action: Dismantling Bias in Maternal and Infant Healthcare™,” developed by the March of Dimes, has been offered so far to more than 35,000 health care providers nationwide. Deshazor was curious about her own biases. She also wanted to be able to describe the benefits of the training to others.

Deshazor said the training gives participants a deeper understanding of what implicit bias is and how it intersects with structural racism. “It provides some real-world examples,” she said, such as women of color finding their concerns dismissed or being scolded during appointments. Deshazor said most health care providers want the best for their patients, but unconscious bias may be getting in the way.

Dismantling bias, Deshazor believes, may be one of the biggest missing pieces when it comes to better outcomes for Black moms. “We know education levels and chronic illnesses alone aren’t causing maternal complications,” she said. “Looking at implicit bias, looking at structural racism helps us get to the root of the problem.” Now, she said, she can recommend the training for health care providers in her area. It's one more way to carry out her mission to reduce disparities in maternal and infant care. 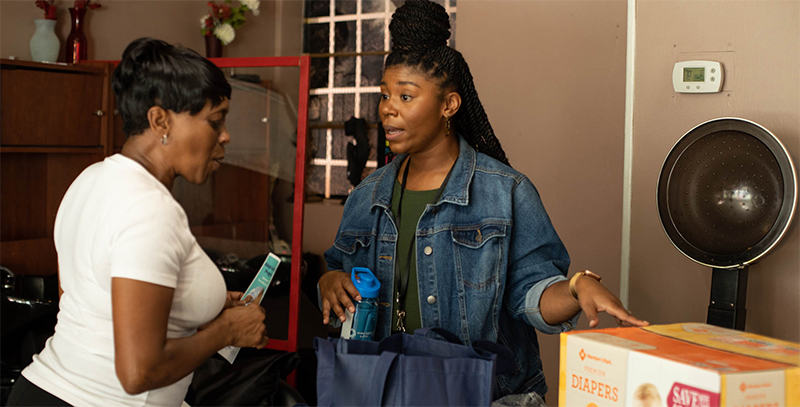 Implicit bias is, by definition, unconscious. But a unique study provides quantifiable evidence of its extent. In 2019, a team of researchers from universities and nonprofits in the U.S. and Canada set out to capture lived experiences with maternity care among diverse populations. Their aim was to quantify the prevalence of mistreatment. In this first-of-its-kind project, researchers worked with participants to develop a list of 60 indicators of mistreatment. Those included a “loss of autonomy; being shouted at, scolded, or threatened; and being ignored, refused, or receiving no response to requests for help.”

The “Giving Voice to Mothers” study found that one in six respondents experienced some form of mistreatment during pregnancy or childbirth. More than a quarter of women of color reported some form of mistreatment versus about 18% of White women. Researchers found that Black, Hispanic, Asian and Indigenous women were twice as likely as White women to report being ignored or refused help.

Rahni Jenkins, vice president of mission operations for the March of Dimes, has led sessions of the organization’s implicit bias in maternal care training. The sessions cite the Giving Voice to Mothers study.

Participants engage in group discussions, hear speakers and complete assignments. Trainers provide attendees with real-life examples of patient experiences to demonstrate the impact of implicit bias. They provide local data about maternal outcomes to give context to the discussions. Jenkins said participants also learn strategies for recognizing and mitigating bias, strategies that may lead to changing behaviors. And then they’re given tools to build even more awareness in their organizations.

“One of the most common things I hear during trainings is, ‘I did not even realize I had biases,’” said Jenkins. “One participant told me, ‘I thought I was doing right by my patients until I had this training. Now I realize how much better I can do.’” Jenkins assures participants that just getting started is what matters: “It’s really about building that understanding, building that awareness. Everyone is at a different place in their journey.”

In addition to group discussions, participants engage in self-reflection. “Our discussions aren't just skimming the top of the surface,” said Jenkins. “We're going for those courageous conversations to dig deeper.” But, Jenkins said, “I don't want any one individual to think that all of this work is on their shoulders alone.”

Jenkins said that, in course evaluations, most participants report having a much greater awareness of their own biases and an understanding of how those biases can lead to health inequities. They also report feeling empowered to influence change in their organizations.

The Black Maternal Health Momnibus Act, legislation introduced in both the U.S. House of Representatives and U.S. Senate in 2021, includes a provision that would award grants to organizations that offer training to “reduce and prevent bias, racism and discrimination in maternity care settings and…advance respectful, culturally congruent, trauma-informed care.”

According to Stateline, a publication funded by the Pew Charitable Trusts, at least four states have adopted requirements that some health care professionals take implicit bias training. Michigan’s governor issued a directive requiring health professionals to take the training in order to receive or renew their licenses.

What’s more, many other Blue Cross and Blue Shield companies across the country are making implicit bias training available to providers across their regions.