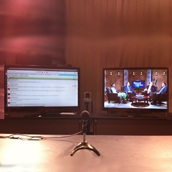 For more than 80 years, Blue Cross and Blue Shield companies have worked alongside local physicians and hospitals across America to help improve access to healthcare.  And today the traditional avenues of access to healthcare are expanding as quickly as the online networking capabilities of both doctors and healthcare consumers.

A recent survey by Parks Associates revealed that “1 in 5 broadband households want live chats with health experts.” This is the new access. In an on-demand and online world where consumers expect to get what they want how they want it, healthcare consumers are no different. Healthcare consumers now expect to get access to doctors and medical information online because they know the technology and communication techniques exist. It’s just a matter of expanding and re-defining the setting of the doctor-patient relationship.

Dr. Peter Salgo, host of PBS television’s Second Opinion, agrees. In its 10th season, this award-winning television program, dedicated to health literacy and improving communication between doctors and patients, has expanded its format to include live Twitter chats during production.

“I think this [social media] is the answer that medicine has been searching for since the dawn of time,” said Dr. Salgo. “How do you stay in touch with people? You know the answers to the questions they’re asking, you know how to help them but you can’t reach out to them. They’re not in your office, you can’t call everybody every day, but you can reach out to them with social media.”

Salgo believes that social media can indeed improve health literacy. “There’s nothing more powerful in medicine than information. And access to that information is where the key is. This is the future of the human race: sharing information.”

The Blue Cross and Blue Shield Association saw this communications trend emerging in healthcare over a year ago. As the sponsor of Second Opinion since its inception in 2003, we collaborated with the show producers to include live Twitter chats with the show’s doctors about concussions, food allergies and diabetes in season 10, which premieres in October 2013 on PBS stations across America. We’re also developing interactive online video features hosted by physicians from the show, and a new web site that provides healthcare consumers with a searchable video database to access information about health and wellness and medical information from trusted physicians.

Doctors and consumers are on social media. Access to information is on social media too and Blue Cross and Blue Shield companies see this as a new, dynamic opportunity to help improve access to healthcare in America.

How do data analytics improve healthcare?