As 8-year-old Tyler Walsh wraps up summer vacation, his back-to-school list will be a bit longer than most of his classmates. Tyler is one of the 9 percent of children in New York State who has asthma. When he returns to school, his mom Jenna Walsh will ensure he has a backpack, school supplies and—perhaps most important—an updated plan for controlling his symptoms.

She realized the importance of timing and preparation thanks to an innovative information campaign launched by her health insurer Excellus BlueCross BlueShield (Excellus BCBS), which alerts the community about six steps they can follow to help control children’s asthma, especially as the school year begins.

The information campaign is simple; the way it came about is more complex. 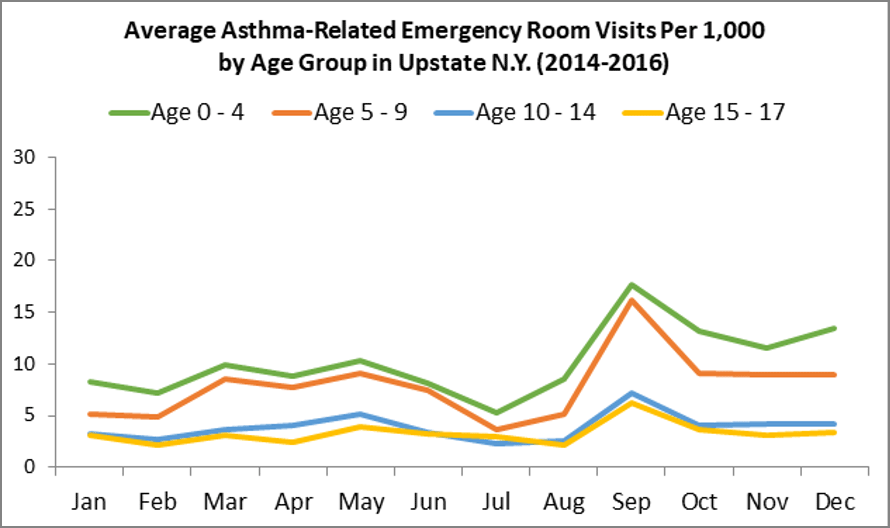 Dr. Lisa Y. Harris, Excellus BCBS medical director, says the trend in asthma symptoms and flare-ups led Excellus BCBS to ask new questions. “We started to think about what’s causing these spikes,” says Harris. The culprit seemed to be timing, as viral infections become more prevalent in the community in the early autumn, pollen and molds are in peak season and children who return to school find themselves back in close contact with other kids.

Sharing the message and the data

Excellus BCBS knew the story they had uncovered could make a real difference for families of children with asthma. They put together a graphic called “Breathe Easy: 6 Steps for Controlling Your Child’s Asthma” with advice ranging from getting a physician’s note for a child’s medication at school to empowering children to avoid triggers and spot the warning signs of an attack.

The graphic went out in time for back-to-school activities on social media, to local media partners and to doctors, who, in turn, shared it with patients. Harris says sharing data with doctors is a priority for Excellus BCBS, not only for the asthma campaign, but for continuously empowering doctors to identify opportunities to help patients.

Acting on the message

Walsh says that when she saw the “Six Steps” campaign she looked through Tyler’s history of medical visits. To her surprise, he did have an uptick in visits in August and September, similar to the “September spike” trend Excellus BCBS had identified.

Walsh says the campaign reminded her to ensure Tyler’s action plan is up to date. She checks expiration dates on medications and dosages for her growing child. She touches base with Tyler’s teachers to help them understand how an asthma attack may impact him. Most importantly, she coaches Tyler about how to recognize possible asthma flare-ups so he can get help when needed. She says following those steps is easing Tyler’s path back to school.