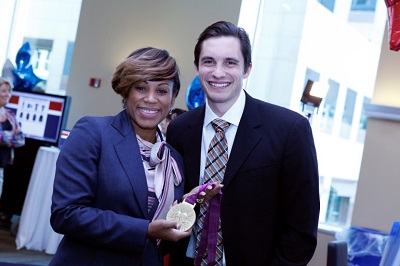 Highmark Blue Cross Blue Shield is proud to be the official health insurance supplier for the 2014 U.S. Olympic and Paralympic Teams and the U.S Olympic Committee, continuing a relationship that began in 2005. But you might be wondering, what exactly does it mean to be a Team USA supplier, and why has Highmark Blue Cross Blue Shield taken on this role?

Here’s a little known fact about the USOC— it is one of the only National Olympic Committees in the world that doesn’t receive government funding for its Olympic programs. Instead, Team USA is financially supported through corporate sponsorships, the sale of television broadcast rights and by donations from Americans, including direct donations and the sale of merchandise (like the “Go USA” mittens), and other contributions.

One way that Highmark Blue Cross Blue Shield helps to support Team USA is by providing health insurance coverage for more than 1,000 athletes and USOC employees. Most U.S. Olympic and Paralympic athletes compete in events that don’t pay them millions of dollars a year. Many of them have day jobs and families, and they juggle those responsibilities along with intense training and a series of competitions to prepare and qualify for the Games. They face many of the same challenges that the rest of us deal with when it comes to work, family and health care. Having Highmark Blue Cross Blue Shield health insurance means that there is one less thing they have to worry about.

We also sponsor individual U.S. athletes for each Olympic Games. For the Sochi 2014 Olympic and Paralympic Winter Games, we have been very proud to sponsor these five amazing athletes:

The athletes we’ve sponsored in previous Olympic Games graciously have made many appearances on behalf of Highmark Blue Cross Blue Shield, for both external and internal partners, allowing our members and employees to share in the Team USA experience in a very personal way.

For instance, they’ve had the chance to meet U.S. Olympic champions like swimmer Eric Shanteau, a member of the U.S. gold medal 4 x 100 medley relay team at the London 2012 Olympic Games, and see what a gold medal looks like up close. They have been able to try sports like sled hockey and curling, and have their photos taken with an authentic Olympic torch. This year, our employees showed their support for Team USA by signing huge banners for each of our sponsored athletes that were delivered before they left for Sochi.

Our Highmark BCBS Team USA website has case studies, videos and blog posts about the athletes we sponsor, and we’ve also been highlighting and interacting with our athletes and Team USA on Facebook, Twitter and Pinterest.

We’re honored to continue to share the stories of these remarkable athletes as well as providing Team USA athletes peace of mind in having comprehensive health coverage as they pursue their Olympic and Paralympic dreams.