In this report, the Blue Cross Blue Shield Association, in collaboration with HealthCore and Blue Health Intelligence (BHI), examines vaccination rates for U.S. commercially insured adolescents. The study focuses on three vaccines recommended by the Centers for Disease Control and Prevention (CDC) for adolescents: human papillomavirus (HPV), meningococcal and tetanus, diphtheria and pertussis (Tdap).1 It follows four birth cohorts of adolescents (born in 2000, 2001, 2002 and 2003) from ages 10 to 13 to determine whether they completed the recommended vaccine regimens “on time” by their 13th birthday (and thereby measures completion rates for the years 2013 through 2016).2

This study finds that national adolescent vaccination rates are fairly high for Tdap and meningococcal, but substantially lower for HPV. Wide geographic variation occurs in vaccination rates for all three vaccines throughout the country at both the state and local levels. Tdap and meningococcal vaccination rates are approximately equal for both boys and girls, while girls receive the HPV vaccine at higher rates than boys. Completion of the HPV vaccine regime for adolescents is a crucial step to protect against future infections, as the CDC estimates 31,500 deaths from cancers relating to the HPV virus occur each year.3 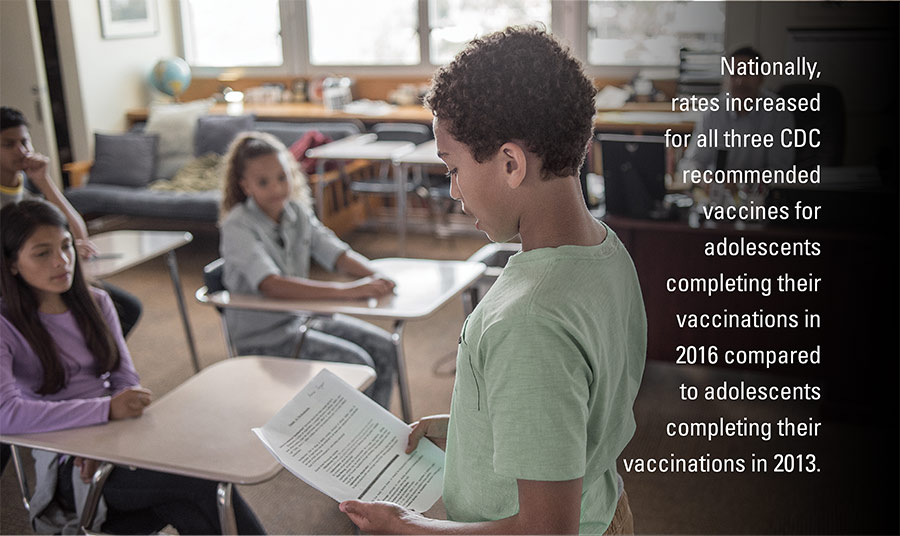 Average first dose rates for the newer HPV vaccine were just 29 percent for adolescents completing their vaccinations between 2013 and 2016 and lagged significantly behind average rates for Tdap (at 82 percent) and meningococcal (at 72 percent). However, this rate did improve from 22 percent to 34 percent for adolescents completing their vaccinations during this period. 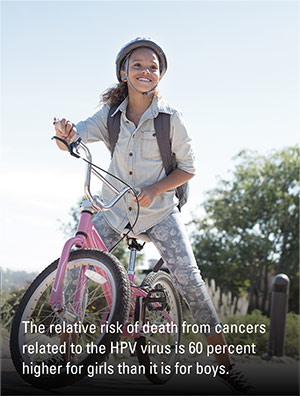 Vaccination rates for the Tdap and meningococcal vaccines were nearly identical between boys and girls completing their vaccines in 2016.5 However, rates for the HPV vaccine differed by gender (see Exhibit 2). The rate for girls completing the first dose of the HPV vaccine in 2016 was 37 percent compared to 32 percent for boys. However, this gap is closing as rates for boys were up 100 percent since 2013. The relative risk of death from cancers related to the HPV virus is 60 percent higher for girls than it is for boys. The CDC has recommended the vaccine for girls since it became available in 2006, five years longer than it has recommended the same vaccine for boys.6 Therefore, this narrowing gender gap in rates suggests more efforts may be needed to increase vaccination among both girls and boys.

Relatively few adolescents completed all three doses of the HPV vaccine during the study period despite three doses being the CDC recommendation at that time; only 8 percent of boys and 10 percent of girls completed their third dose in 2016.

Wide geographic variation exists across the nation in rates of the three CDC-recommended adolescent vaccines. State-level adolescent vaccination rates show some regions meet or exceed public health targets, while others fall far below suggested levels. (See Appendices A and B for detailed information by state.)

Large geographic differences also occur in metropolitan statistical areas (MSAs) across the country in rates of the CDC-recommended adolescent vaccines. Similar to the state-level analysis, some MSAs reach beyond public health vaccination targets, while others fall short of meeting national goals. (See Appendices C and D for detailed information by MSA.)

Adolescent vaccination rates are an important metric in the prevention of serious infectious diseases. The findings in this report show that the on time completion rates of the three CDC-recommended vaccines of HPV, meningococcal and Tdap for commercially insured American adolescents have all increased between 2013 and 2016. However, while about three-quarters of adolescents in the U.S. complete the more-established meningococcal and Tdap vaccines by age 13, only one-third of adolescents receive the first dose of the newer HPV vaccine.

For certain areas of the country, work is needed to improve completion rates of all three vaccines. For the meningococcal and Tdap vaccines, some areas lag as much as 50 percent behind other areas. Moreover, HPV vaccination rates in all areas are much lower than the other vaccines. Results from this study suggest continued efforts for awareness and education are needed to achieve compliance with the administration of the three CDC-recommended vaccines for adolescents in America.

This is the eighteenth study of the Blue Cross Blue Shield, The Health of America Report series, a collaboration between Blue Cross Blue Shield Association and Blue Health Intelligence, which uses a market-leading claims database to uncover key trends and insights into healthcare affordability and access to care. Analysis was performed by and also includes medical claims data from HealthCore, a wholly owned and independently operated health outcomes subsidiary of Anthem, Inc.

The report examines the medical claims of more than 1.3 million Blue Cross Blue Shield commercially insured adolescent members per year from 2010 through 2016. This study aims to determine how Tdap, meningococcal and HPV vaccination rates have changed during the study period, with breakouts by gender and geography. For the purposes of this analysis, a vaccine is considered to be on time if it is completed between the adolescent’s 10th and 13th birthdays, and thus aligns with the CDC-recommended timeframe of ages 11 to 12. All adolescents considered in this study were born between the years 2000 and 2003, and thereby were ages 10 to13 from the years 2010 through 2016. There are four adolescent birth groupings, or birth cohorts, analyzed in this study. Each birth cohort is followed for three years. Adolescents in the first birth cohort were born in 2000 and data from 2010 through 2013 are included here. Adolescents in the fourth cohort were born in 2003 and data from 2013 through 2016 are included here.

All U.S. states and MSAs included in the report had a sample size of 500 or more adolescents. Alaska, Hawaii, Montana, South Dakota and Washington, D.C. were excluded from state-specific reporting due to an insufficient study population. Data from Anthem Blue Cross were excluded from calculations for the state of California because of the prevalence of capitated payments to primary care providers, reducing the incentive for providers to submit claims for primary care, thereby under-representing adolescent vaccination rates in that state.

Note that this report does not capture adolescent members who receive the HPV vaccine after their 13th birthday or those who received the vaccine from a free public or private local program which does not generate a medical claim.

For more information and to read past reports from the Health of America Report series, visit www.bcbs.com/the-health-of-america.

Appendix A: All Adolescent Vaccination Rates by State

Appendix E: Rates of Tdap and Meningococcal Vaccinations from 2013 through 2016 by State