The Rise of “Shoppable” Surgical Interventions 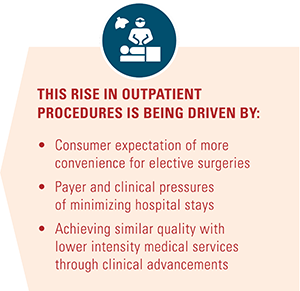 Recent years have seen a rapid increase in selected outpatient medical services, including surgical and interventional procedures, being performed in the outpatient setting, as hospitalized inpatient visits have fallen. Complex procedures and surgeries now are possible in outpatient facilities due to new medical technologies, such as minimally invasive surgical techniques, new anesthesia and pain control techniques, that prevent complications and allow patients to return home more quickly.1,2

Blue Cross Blue Shield, The Health of America Report is a collaboration between Blue Cross Blue Shield Association and Blue Health Intelligence, which uses a market-leading claims database to uncover key trends and provide insight into healthcare affordability and access to care.

This report analyzed the claims data of approximately 43 million BCBS commercially insured members (excludes Medicare and Medicaid) under the age of 65 from 2010 to 2014. Data was pulled by procedure using a combination of coding processes to capture inpatient and outpatient procedures, including Diagnosis- Related Groups (DRGs), International Classification of Diseases (ICD) procedure codes and Current Procedural Terminology (CPT) codes. Cost and utilization were measured at the stay level for inpatient (total facility and all professional charges during an admission) and visit level for outpatient (total facility and professional charges for date of service). The data was not adjusted for patient risk.

For appropriate patients, outpatient surgery has been shown to be safe and effective, achieving similar or better outcomes as inpatient procedures while allowing patients to spend less time in a medical facility, recover faster and incur less pain. Spine surgery and angioplasty have been shown to be safe and are associated with similar or better outcomes in the outpatient setting.3,4 Additionally, outpatient hysterectomy was found to have fewer 30-day complications, lower risk of perioperative morbidity, less risk of wound complications and other medical complications compared to inpatient, even after adjusting for demographic and operative differences between the two groups.5

This report highlights the general trend from 2010 to 2014 for select elective or “shoppable” procedures that could be performed in either inpatient or outpatient settings. Shoppable procedures were selected based on consumer interest in pricing and include planned procedures performed on a non-emergency basis that allow patients time to search for providers and select where and when they would like to receive surgery. This report examines four shoppable procedures during the study period, two of which showed a strong shift to outpatient care (hysterectomy and lumbar/spine surgery6) and two of which remained steady but at very different levels of outpatient care (angioplasty and gallbladder removal) during the study period.7

These four procedures cost all BCBS Plans, their members and employers nationwide an estimated $11 billion in 2014.

Outpatient Cost Savings on the Rise 5 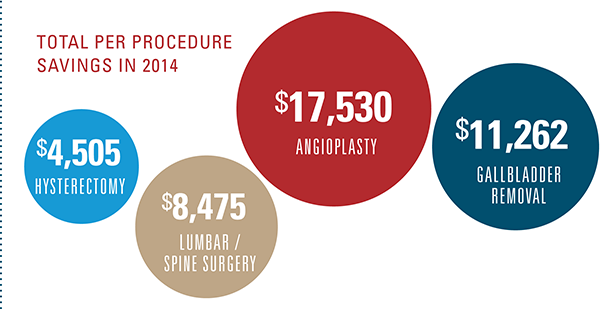 Cost savings for the four procedures we examined varied between inpatient and outpatient settings, but all increased consistently. Total per-procedure savings in 2014 ranged from $4,505 for hysterectomy to $17,530 for angioplasty. Core reimbursement structures are the primary driver of the cost difference between inpatient and outpatient procedures.

Between 2010 and 2014, the annual inflation rate for all four procedures was also a major factor impacting costs — it was higher for inpatient, resulting in a growing total cost advantage for outpatient procedures. Many factors contribute to this differential inflation rate, potentially including reimbursement policies, cost structures on the inpatient and outpatient settings, and differences in the health status of patients. 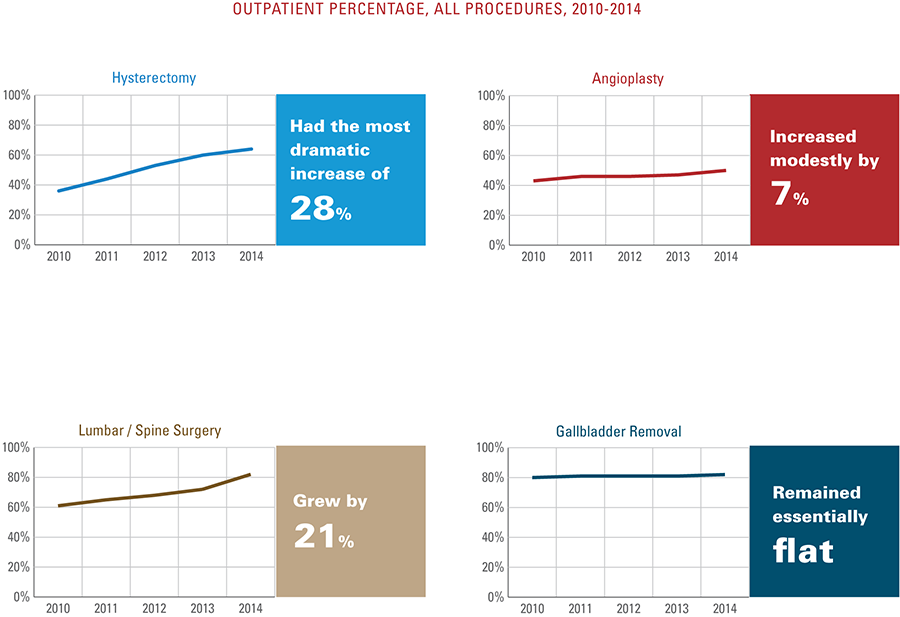 Outpatient hysterectomies create real — and growing — cost savings, with the average per-procedure cost inpatient to outpatient difference rising from $2,781 in 2010 to $4,505 by 2014. Members saved an average of $483 in out-of-pocket costs in 2014 by having an outpatient procedure.9 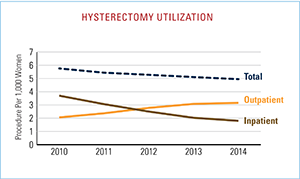 Hysterectomy treatment protocols have changed significantly in recent years as a result of new technology and surgical approaches.10,11 The traditional abdominal hysterectomy, which often performed inpatient, remains the most common surgical approach, accounting for approximately 50 percent of hysterectomies. However, abdominal and vaginal hysterectomies have given ground to newer laparoscopic and robotic-assisted laparoscopic approaches that are more amenable to outpatient surgery and a likely cause of the shift.

Despite increasing procedure costs, outpatient lumbar/spine surgeries also represent significant and growing cost savings — from an average saving per procedure of $5,269 in 2010 to $8,475 in 2014. Members saved an average of $320 in out-of-pocket costs by having an outpatient procedure.12 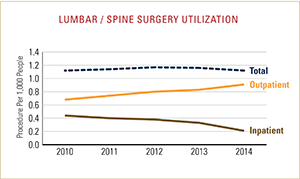 Clinicians and the medical community have begun to scrutinize these surgeries more closely to better assess their efficacy and value. In some cases, findings regarding the relative benefits of surgery over conservative therapy have been uncertain.13 As a result, some payers have created preauthorization protocols to ensure that more conservative, non-surgical therapies be attempted prior to surgery, as well as to ensure that the patient is predicted to benefit from the procedure.14,15 These new protocols likely contribute to keeping utilization relatively stable.

Outpatient angioplasties also represent significant cost savings despite the fact that outpatient growth was very modest during our study period. The average difference in procedure cost between inpatient and outpatient increased from $11,062 in 2010 to $17,530 in 2014. In 2014, members saved an average of $1,062 in out-of-pocket costs by having an outpatient procedure.16 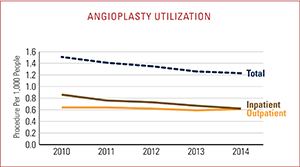 The angioplasty results on the left include non-emergent, elective angioplasty for coronary arteries narrowed by coronary artery disease (CAD), and do not include angioplasties performed emergently following a heart attack (acute myocardial infarction). In the elective group, the outpatient fraction is currently about 50 percent and has been steady since 2010. It is likely this outpatient fraction has remained at this relatively low level compared to other procedures due to the risk of heart-related comorbidities; i.e., these patients are not ideal candidates for outpatient procedures. Additionally, the infrastructure needed to provide outpatient angioplasty, including appropriate facilities and dedicated staff, may not be available in all areas.

Like angioplasty, outpatient gallbladder procedures also represented significant and growing cost savings despite having a stable proportion of outpatient procedures done during our study period. The average per-procedure cost difference between inpatient and outpatient increased from $8,299 in 2010 to $11,262 in 2014. Members saved an average of $924 in out-of-pocket costs by having an outpatient procedure.18 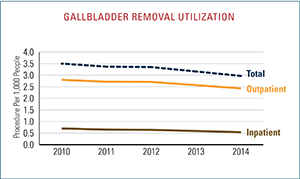 A majority of gallbladder removals shifted to outpatient settings during the last 20 years due to the innovation of laparoscopic instruments and new minimally invasive techniques. Gallbladder removal remains one of the greatest success stories of laparoscopic, minimally invasive surgeries and explains why outpatient procedures are so prevalent even prior to 2010. The remaining 15 percent to 20 percent of gallbladder surgeries that are performed inpatient likely involve patients who are not good candidates for outpatient surgery and are thus not likely to shift substantially in the future.19

Members will need to be thoughtful when deciding where to receive care. Many carriers (including BCBS Plans) have programs to help members find appropriate settings of care and educate members on the cost and quality benefits.

Performing procedures in the outpatient setting will continue to provide valuable cost savings, which will likely grow in the near future. These savings will be especially important for members who are bearing an increasing share of the cost of their care due to rising deductibles and other cost-sharing methods.

BCBS Kansas is working to improve access to mental health care through a statewide awareness campaign, as well as an initiative to make sure the patient is matched with the appropriate provider.
Share
Read
Featured Topics
Affordability(62)
Opioids(31)
Palliative Care(5)