Expansive news media coverage of football-related concussions and state legislation aimed at preventing participants of youth sports from “shaking off” signs of head injuries have coincided with a spike in the number of concussion diagnoses, according to Blue Cross and Blue Shield (BCBS) companies’ medical claims data.

Finally, BCBS data in 2015 show that patients ages 10 through 19 in some states have nearly a three times higher rate of concussions diagnosed than in other states. The intent of this report is to document concussion diagnosis rates and increase awareness that could help inform policy and concussion treatment practices for school districts and medical professionals. 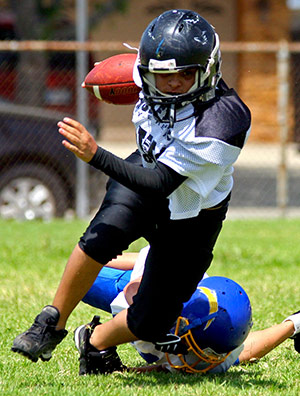 News reports on the long-term effects of concussions and chronic traumatic encephalopathy (CTE) in football have created a new level of awareness about the seriousness of head injuries in the U.S. National and local organizations representing youth, collegiate and professional sports, as well as health care professionals, have taken significant measures to address this once overlooked issue. This awareness has inspired state lawmakers to act. In May 2009, the state of Washington approved the Zackery Lystedt Law, named after a young football player who was permanently disabled after he sustained a concussion and prematurely returned to a game. Sometimes referred to as the “shake-it-off law,” it requires medical clearance of youth athletes suspected of sustaining a concussion before sending them back in the game, practice or training. Within five years of the law’s passage, all 50 states and the District of Columbia adopted much of its core principals, which were backed and promoted by the National Football League (NFL). Despite greater awareness and the new laws, there is still wide variability in concussion diagnosis rates from state to state.

The increase in concussion diagnoses mostly took place from 2010 to 2013, when most states were enacting shake-it-off laws, and continued ticking up slightly through 2015. Concussion diagnoses during the six-year study period spiked 71 percent from 8.9 to 15.2 diagnoses per 1,000 members, for patients ages 10 through 19, for whom shake-it-off laws were written to protect. This compares to a 26 percent increase from 1.9 to 2.4 diagnoses per 1,000 members for those ages 20 through 64, whose concussion rates were consistently low compared to their younger counterparts. 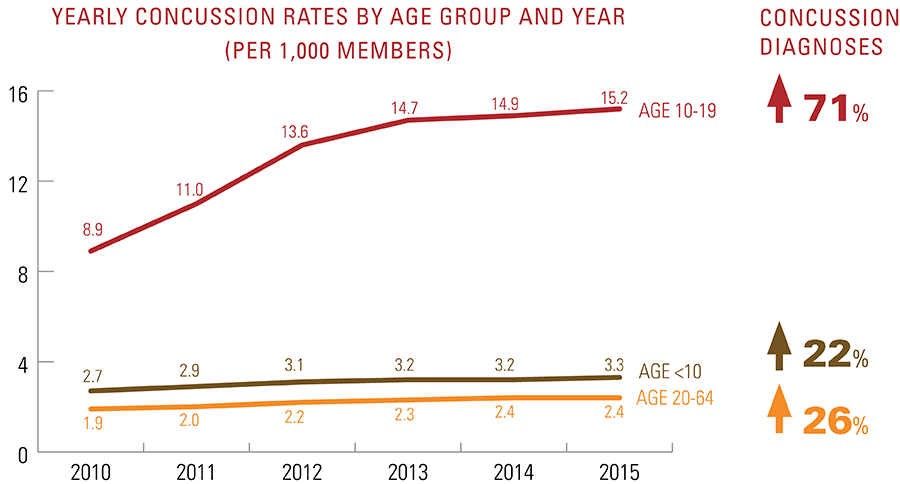 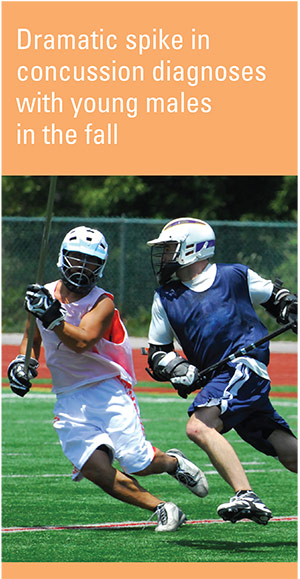 Data show that patients ages 10 through 19 are over five times more likely to be diagnosed with a concussion than all other age groups combined, with young males being diagnosed 49 percent more than young females. In the fall, there is a dramatic spike in concussion diagnoses, with young males being diagnosed at a rate of 7.0 per 1,000 members, which is nearly double that of young females at 3.7 per 1,000 members. Fall is when the most popular contact sports are in session (e.g. football and, in most states, soccer) at schools and parks. There are no significant seasonal differences for adults ages 20 to 64. 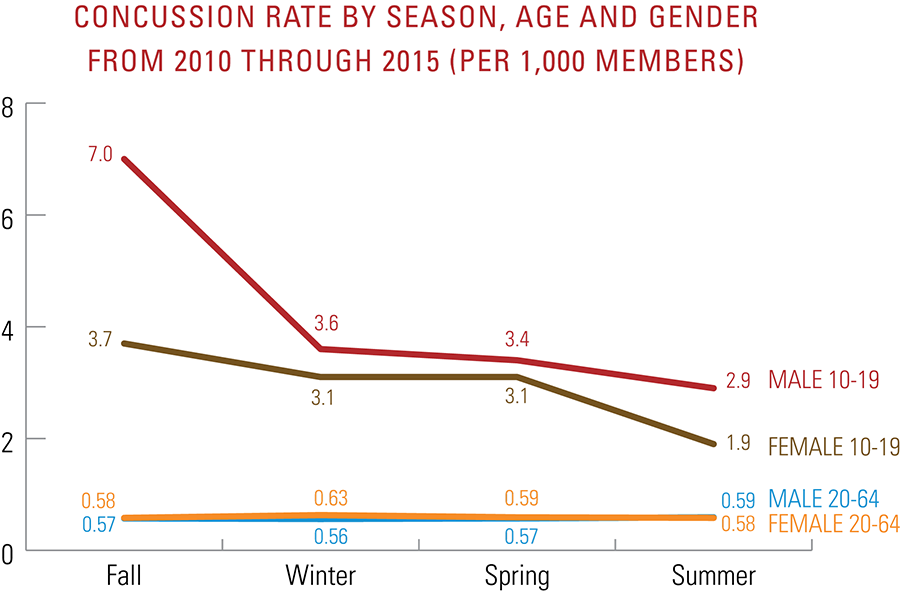 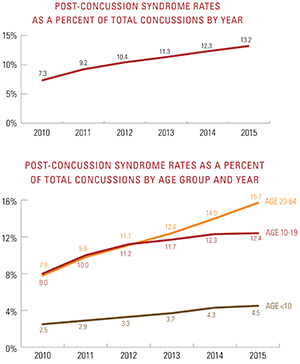 Adults ages 20 through 64 who were diagnosed with a concussion in 2015 were subsequently diagnosed with post-concussion syndrome 15.7 percent of the time, which was a higher rate than members ages 10 through 19 at 12.4 percent. 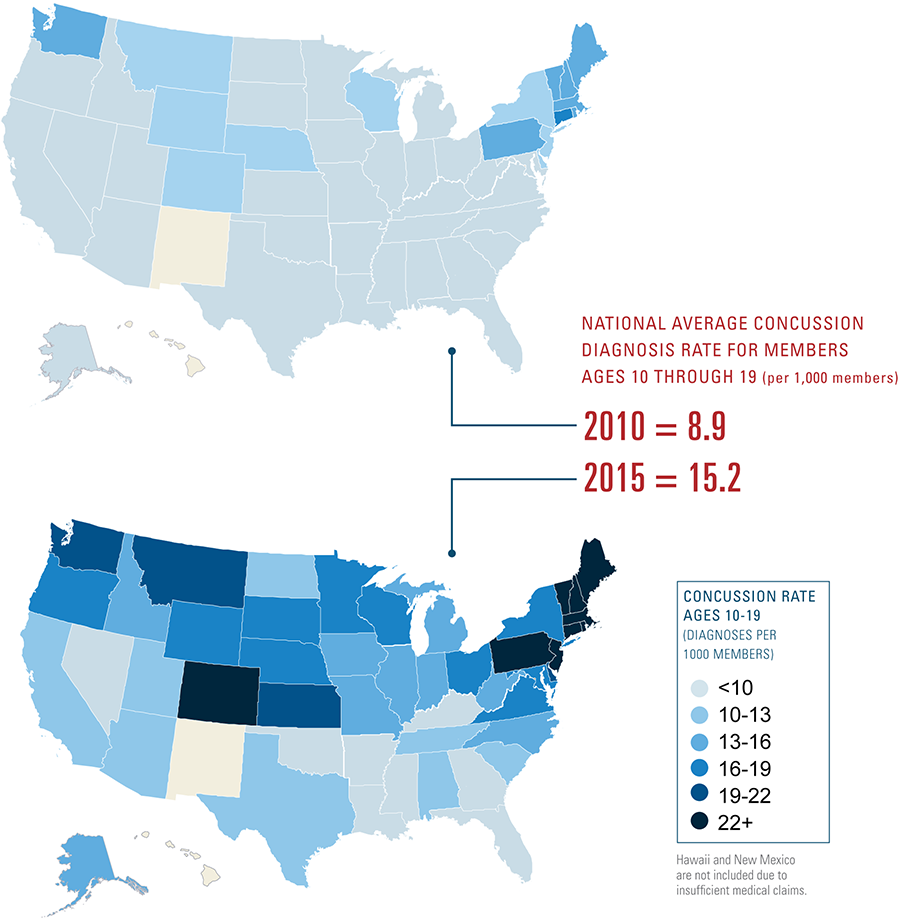 Evidence shows that shake-it-off laws passed over the last eight years have increased the number of concussion diagnoses particularly among young males and females ages 10 through 19. *Greater awareness generated by news media reports on concussions and CTE in current and former football players also coincided with increased diagnoses of concussions and post-concussion syndrome for patients of all ages. National and local organizations representing youth sports and health care professionals have also been effective at generating awareness about the need to diagnose and treat concussions.

Despite similar laws and heightened awareness throughout the U.S., there still is a significant variation in the rate of concussion diagnoses between states. More study on the differences in state regulations, their implementation, participation rates in contact sports and local health care utilization patterns is needed to understand the reasons for the variations. More research also is needed to understand why adult females are diagnosed with more post-concussion syndrome than males.

* Greater awareness is also demonstrated when using Google Trends to measure the number of people in the U.S. who searched for, and the amount of news coverage that included the word “concussion,” which increased between 2010 and 2015. The term also was used more on the Internet during the fall.

This is the ninth study of the Blue Cross Blue Shield: The Health of America Report series, a collaboration between BCBSA and Blue Health Intelligence, which uses a market-leading claims database to uncover key trends and insights into health care affordability and access to care. This report examines the medical claims of 936,630 diagnosed concussions for BCBS commercially-insured members (non-Medicare) from 2010 through 2015. The seasons consist of three month groups, with fall from September through November, winter from December through February, spring from March through May and summer from June through August. All concussion rates presented are average yearly rates per 1,000 members. 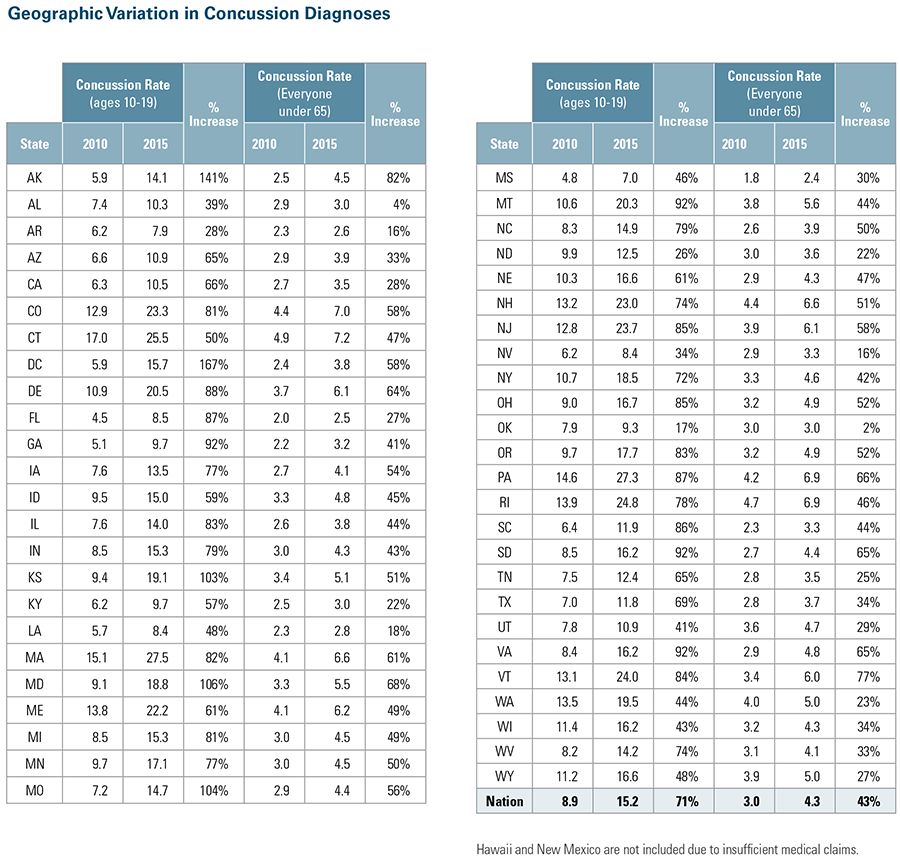 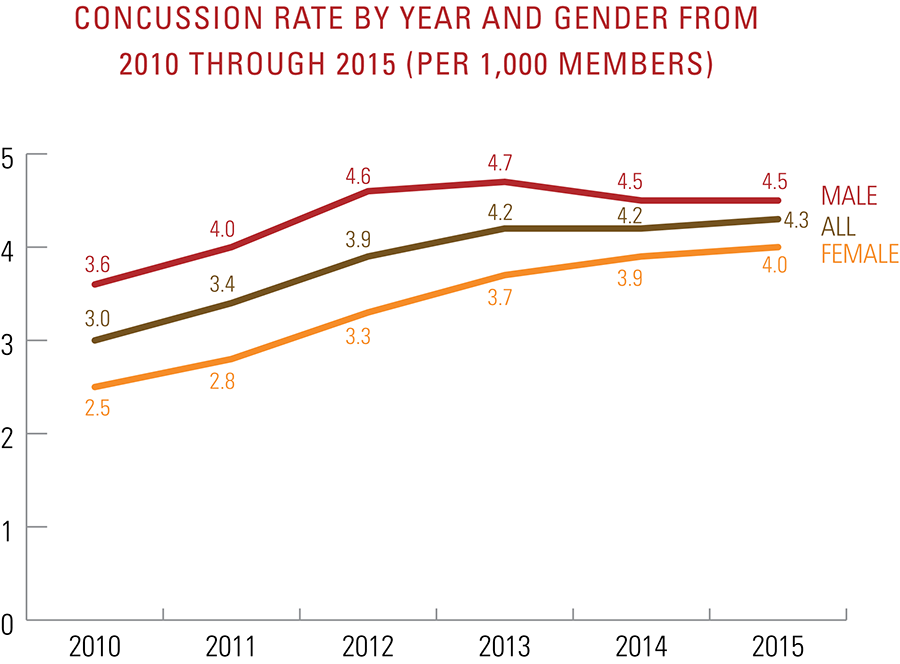 Rural hospitals are in crisis. How did this Alabama hospital beat the odds?

Bibb Medical Center in rural Bibb County, Alabama, has figured out a way not only to keep its emergency room open, but to transform itself into a thriving healthcare system. Their success comes at a time when rural hospitals are closing or in trouble across the country. Bibb may be a blueprint for other rural hospitals that could play an even bigger role in keeping their communities healthy. In this episode of the Health of America podcast, learn how Bibb Medical Center is beating the odds.
Share
Read
Article