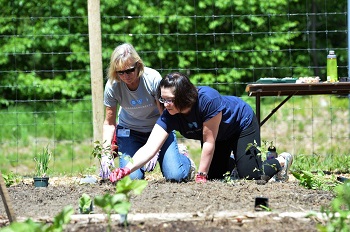 "When we try to pick out anything by itself, we find it hitched to everything else in the Universe."

Humans are only a small part of the incredibly complex but connected system of life on our Earth. While we are only one of over 8 million species in existence, our individual health and well-being are intimately linked to the health of our planet. Many contributing factors to common chronic diseases involve the quality of the air we breathe or the water we drink and the food we eat.  The homes we live in, the offices we work in and the schools our children learn in can all impact our health if we do not avoid exposing ourselves and our families to harmful substances, products and materials. And a changing climate is already exacerbating many health ailments.

But a healthy planet can also heal us.  Many common and important medicines we use every day are derived from plants and animals. Being exposed to nature, green space and blue space, can often reduce stress and enhance our mood, improve our performance, and even help us recover more quickly from major health events such as strokes. Sustainable, healthy foods improve our health and the health of the planet.

In 2011, BCBSMA set a goal of a 15 percent reduction in absolute greenhouse gas (GHG) emissions by 2015. Through various energy efficiency, IT, and associate engagement initiatives, it reduced its emissions by more than  14 percent, avoiding over 2,000 tons of CO2 equivalent (CO2e) entering our atmosphere. This is the equivalent of taking 400 cars off the road.

Highmark BCBS reduced GHG emissions from 2014 to 2015 by almost 7 percent  or 1,500 metric tons of CO2e and by more than  23 percent  or 6,200 metric tons of CO2e from its baseline year 2009. Reductions were achieved in part by replacing office, stairwell and parking garage lighting with LEDs. Additionally, Highmark Blue Shield (Highmark BS) and Highmark Blue Cross Blue Shield West Virginia (Highmark BCBSWV) earned ENERGY STAR certification for their facilities in 2016.

Since 2012, Blue Shield of California (BSCA) has reduced its GHG emissions 4 percent. Through its Environmental Working Group, the company has undertaken a variety of energy-savings efforts, such as updating interior and exterior lighting to LED where feasible, retro-commissioning HVAC systems to reduce energy and enrolling in the EPA Energy Star program. BSCA also began moving data centers in Lodi and El Dorado Hills to co-location facilities, which are significantly more energy efficient than stand-alone centers.

Last year, BCBSMA moved into its new headquarters in downtown Boston where it prioritized health and sustainability. Key attributes include 100 percent LED lighting, flame retardant-free furniture, automatic adjustable desks for each associate, and 97 percent of seated spaces having access to daylight.

In 2015, BSCA renovated a new 175,000 square-feet facility in Rancho Cordova. Along with using energy saving design elements in the renovation, such as LED lighting and high efficiency HVAC equipment, low Volatile Organic Compound (VOC) paints and finishes, Forest Stewardship Council-certified wood, recycled rubber flooring in certain areas and “cradle to cradle” office furniture were used. And throughout the construction process, BSCA was able to recycle nearly 84 percent of all waste generated.

BCBSMA broke ground on a 3,500-square-foot garden in 2015. Not only did it produce over 4,000 lbs of organic produce for more than 60 gardeners but it provided a space for associates to spend time outside relaxing and recharging.

Highmark BCBS and Highmark BS partnered with Parkhurst Dining to celebrate the 2nd annual National Honey Bee Awareness Day by offering menus with local, seasonal meals that highlighted the importance of honey bees to food production to more than 800 employees in attendance.

BCBSMA has partnered with the Appalachian Mountain Club and Boston Medical Center to train doctors to write “prescriptions for the outdoors” to children and families through its OutdoorsRx program, which encourages children and their families to get more physically active outdoors, either on their own or by joining an AMC-guided Outdoors Rx activity in their community.

Highmark BCBS supports bicycle infrastructure through the new Healthy Ride Pittsburgh bike share, launched together with Allegheny Health Network in April 2015. Both Highmark BCBS and Highmark BCBSWV were recognized as Bicycle Friendly Businesses by the League of American Bicyclists for providing bicycle infrastructure for employees and supporting a bike-friendly culture at the office. Highmark BCBS was also recognized by Sustainable Pittsburgh as the winner in the large company category of the Green Workplace Challenge for its support of bicycling initiatives along with its achievements in energy conservation and other environmental initiatives that strengthen the Pittsburgh community’s collective efforts to protect health of humans and the environment.

BSCA is partnering with the California Bicycling Coalition to bring a new Wellvolution® challenge to its employees this May. BSCA will donate $1 for every mile ridden (up to $20,000) by its employees to support community bike kitchens throughout the state. The goal is to encourage healthy behaviors while using “sweat equity” principles to create access to cycling in lower-income communities.

There are countless other examples of corporate and community initiatives across the 36 BCBS companies that are improving the environment and our health. To take advantage of the collective impact of our ideas, experiences and learnings, we encourage others to join us on this important journey.