Cheryl Robicheau Austin has spent a lifetime fighting for Tremé, the New Orleans neighborhood she’s always called home. She’s director of the Greater Tremé Consortium, a decades-old nonprofit that advocates for the residents of this historically poor community, now in the throes of change.

To get a better handle on Tremé’s needs, Austin is working with researchers at Tulane University, in partnership with Blue Cross and Blue Shield of Louisiana.

Academics and insurer collaborate
“The Partnership for Healthcare Innovation,” a new agreement between Tulane University in New Orleans and Blue Cross and Blue Shield (BCBS) of Louisiana, aims to mobilize the resources of both organizations to improve the health and lives of all Louisianians. The state ranks near the bottom of nearly every list of health indicators in the country. Each organization has unique assets that can help move the needle on those indicators. Tulane brings some of the best minds in academia from a diversity of disciplines, from medicine to law to the social sciences. BCBS Louisiana holds not only the state’s richest cache of health data, but also a team of employees with deep healthcare expertise and a desire to roll up their sleeves and help.

John Maginnis, BCBS Louisiana vice president of strategic communications and a leading architect of the partnership, says all 12 of Tulane’s schools are involved, whether in on-the-ground projects or academic exercises.

“Healthcare is so all-encompassing these days,” says Maginnis, noting how students from multiple disciplines will be involved in the partnership. For example, he says, “Tulane officials felt that the law school in particular could benefit from this partnership, because healthcare law has been so complicated over the years. The engineering school took a lot of interest in this. The social scientists are interested in mapping food deserts, transportation deserts,” Maginnis says. “It’s really opened our eyes to many different perspectives.”

And among the many projects the university and the insurer plan to collaborate on is making improvements in Tremé. The first step: a door-to-door survey. 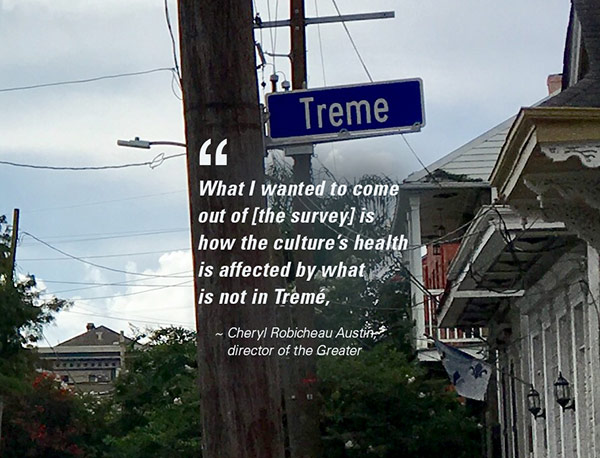 Looking for answers, house by house
“What I wanted to come out of [the survey] is how the culture’s health is affected by what is not in Tremé,” says Austin. “This community is now recognized as where some of the most talented musicians, Mardi Gras Indians, social aid and pleasure clubs, and of course jazz [were] birthed,” says Austin. She says growing up in Tremé was like growing up with an extended family. It also meant, for many, living in poverty and lacking access to health resources. Hurricane Katrina knocked out one of those key resources, the state-run Charity Hospital, which closed in the storm’s wake.

“So, all of our lives we have seen this cultural community work in some of the most low-paying jobs. They are the ones that deliver the culture to the hospitality industry,” says Austin. “And they are not taken care of. Most of them do not have health insurance. So what do you do about that?”

You might not think to call in an architect to help answer that question, but Nick Jenisch, a project manager for Tulane’s Albert and Tina Small Center for Collaborative Design, was the right man for the job. Jenisch, along with volunteers from BCBS Louisiana, helped carry out the resident survey, which included questions about the neighborhood’s natural and built environments. On a steamy New Orleans afternoon, Jenisch led a tour, pointing out new parks and historic landmarks.

“We were knocking on doors throughout the entire neighborhood, asking folks a series of questions about which parks they use, any barriers they may have to parks. Also, what their healthcare is like, where they get their healthcare,” says Jenisch.

“We combined that with some mapping analysis,” Jenisch adds. This will give researchers a better feel for how residents use parks and transit routes, what resources are lacking and which could be better designed.

Seeking solutions together
Jenisch and Austin are reviewing the results of the “Healthy Tremé” survey now.  Needs identified so far include better access to parks, improved drainage in abandoned lots to eliminate standing water and the mosquitoes it breeds, and higher-profile health information resources embedded in community centers.

These are problems no single organization could solve alone. But working together, Tulane and BCBS Louisiana can capitalize on each other’s strengths.

“The researchers [from Tulane] are not jaded about what can or cannot be done. They ask the right questions,” says Tom Richert, vice president of marketing for BCBS Louisiana and a member of the Education and Community Outreach steering committee for the partnership. “They’re not bound by preconceived limitations on what can and can’t be done.”