View the infographic on Major Depression

Major depression is a complex condition that has a substantial impact on overall health and wellness. It is crucial to effectively address and manage this condition to improve the health of all Americans. 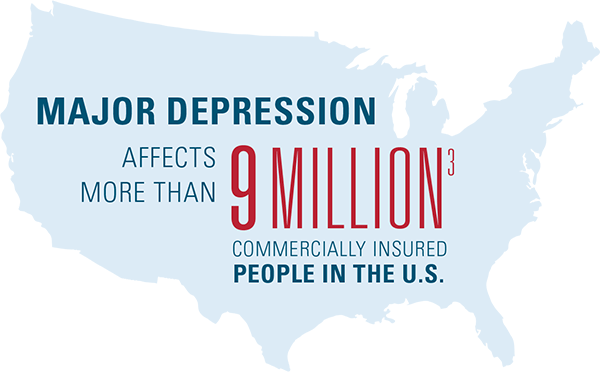 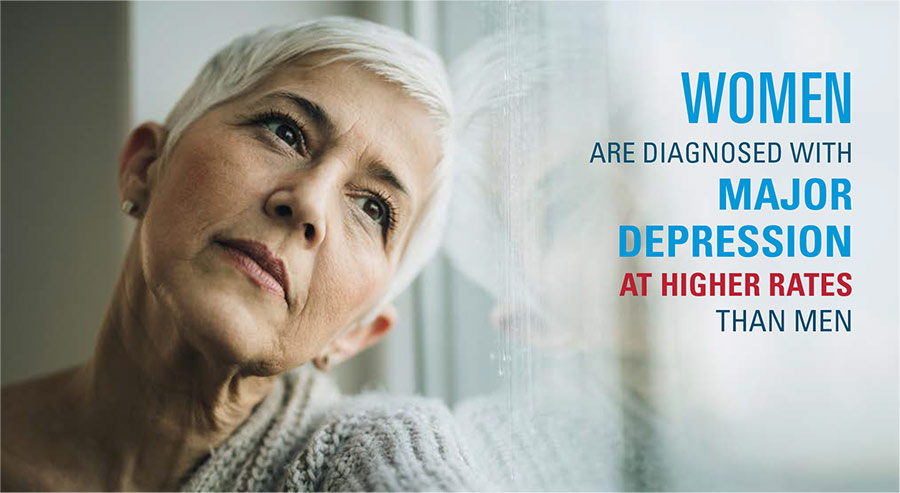 The Impact of Major Depression on Overall Health

Major depression is the second most impactful condition on the overall health of commercially insured Americans, as measured by the BCBS Health Index. Only hypertension, with a nearly five-fold higher diagnosis rate, has a broader health impact on Americans. 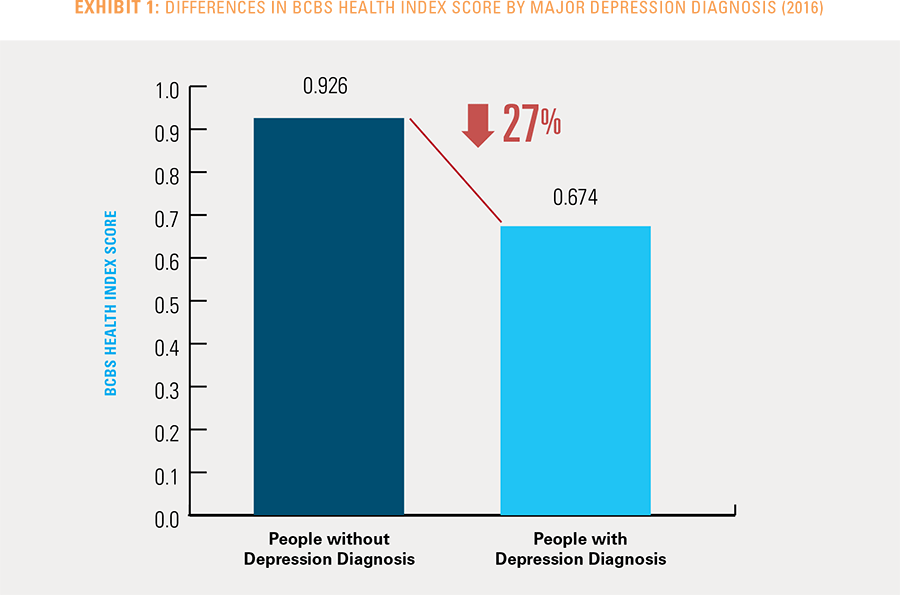 The Diagnosis of Major Depression

Major depression impacts the lives of 4.4 percent of commercially insured Americans, or roughly 9 million people. This diagnosis rate has increased steadily since 2013 across all gender and age groups.

Women are more than twice as likely as men to be diagnosed with major depression (6 percent compared to 2.8 percent, respectively), though diagnosis rates for each group rose by 33 percent since 2013 (see Exhibit 2). 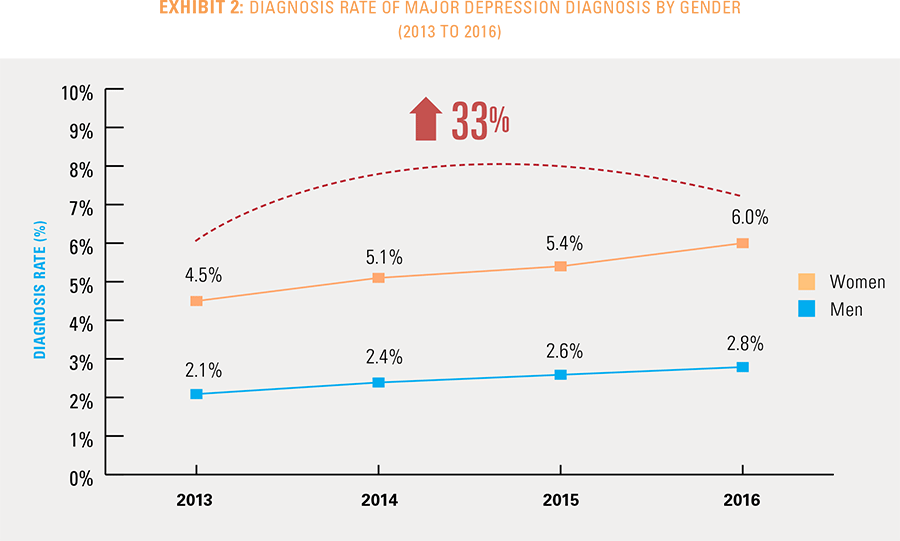 Major depression diagnosis rates are steadily increasing across all age groupings. The most dramatic rise in major depression diagnosis is among those under 35 years of age. Between 2013 and 2016 diagnoses increased 63 percent among adolescents and 47 percent among millennials (see Exhibit 3). Gender differences among millennials were similar but among adolescents there was a 65 percent increase for girls compared to a 47 percent rise for boys. These quickly rising rates of diagnosed major depression in younger age groups can have broader implications on future healthcare needs as they grow into later adulthood. Effective diagnosis and management of major depression in these early years is crucial to positively impact future health and wellness. 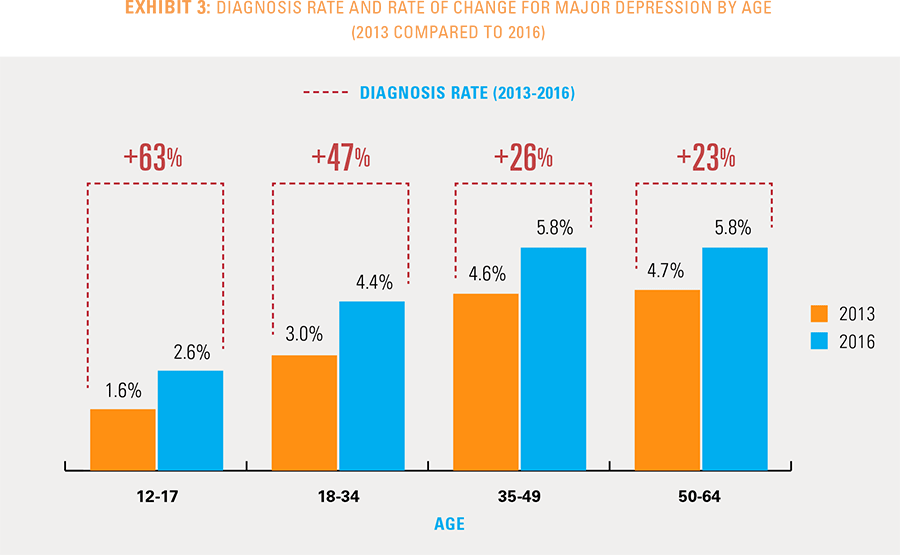 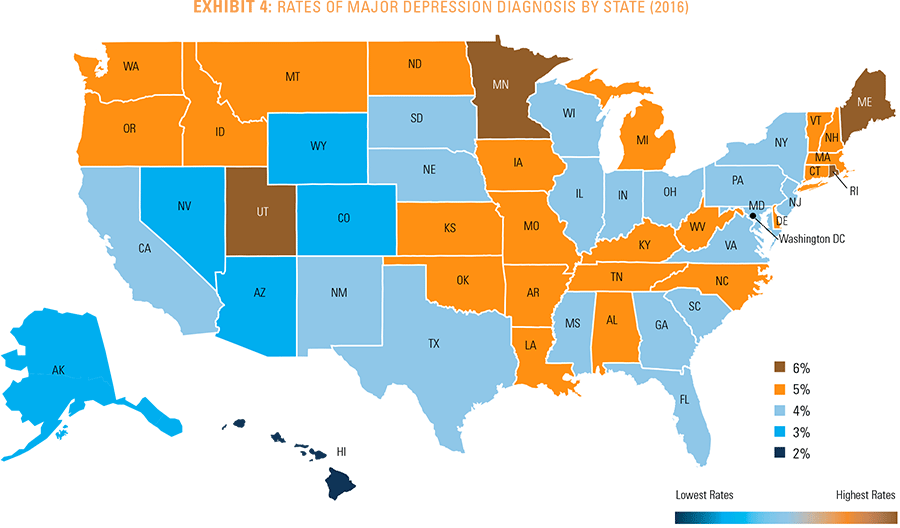 The Link Between Major Depression and Other Health Conditions 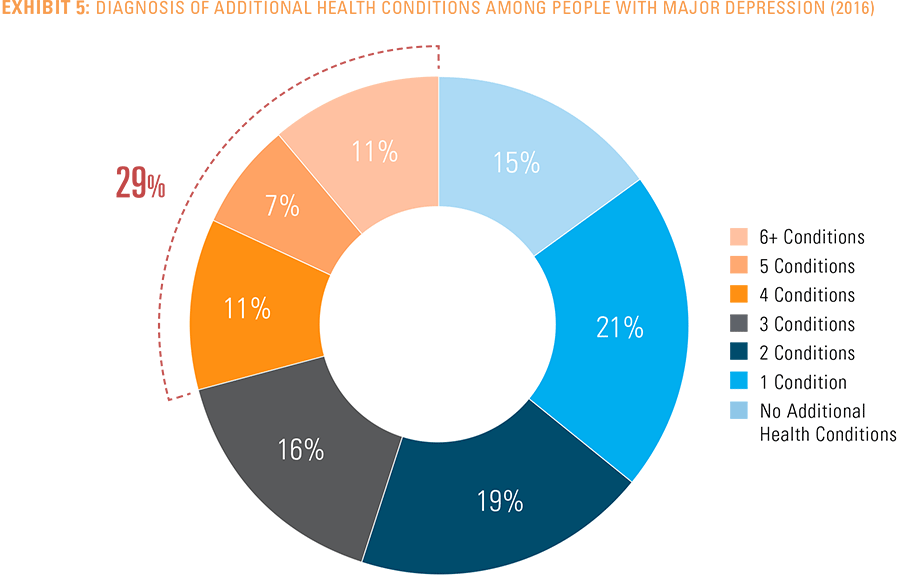 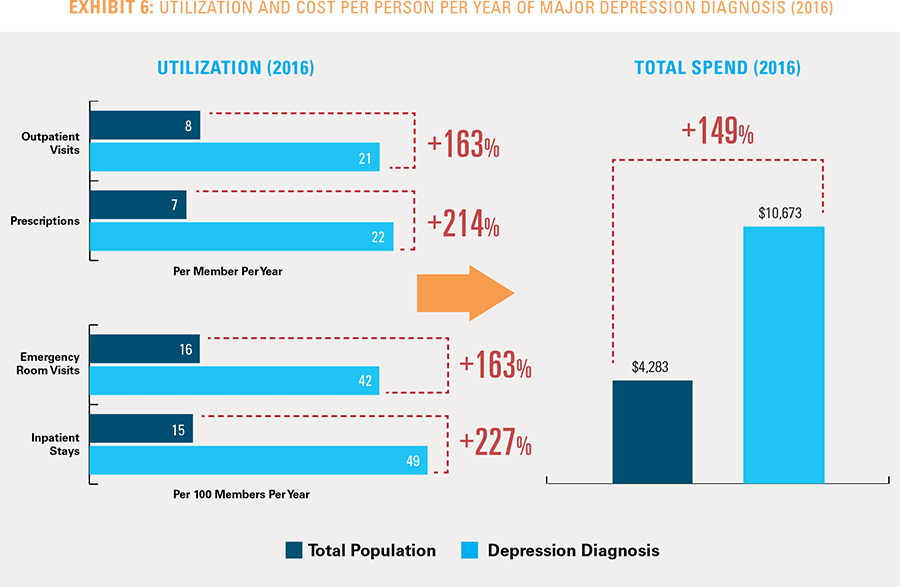 While major depression is the second most impactful health condition for the nation, it is complicated by an increased likelihood of overlapping diagnoses of other chronic, behavioral health and pain-related conditions. Further education and research are needed to identify methods for physicians to effectively treat major depression and for patients to begin a path to recovery and better overall health.

Appendix A: THE BCBS Health IndexSM

Powered by data from more than 41 million BCBS commercially insured members per year from birth to age 64, this extensive resource brings an unmatched contribution to other available health data to support national and local discussions about how to improve healthcare in the U.S. Focusing on claims and other healthcare data as opposed to aggregated government statistics, the BCBS Health Index provides a unique view of America’s health down to the county level.

The BCBS Health Index is part of Blue Cross and Blue Shield companies’ commitment to improving the health of all Americans by uniting policymakers, community leaders, healthcare professionals and business leaders around data-driven insights to spark real change across the nation.

This is the twentieth study of the Blue Cross Blue Shield, The Health of America Report series. For more information and to read past reports, visit www.bcbs.com/the-health-of-america.

The BCBS Health Index assigns defined populations in the United States a health index score between 0 and 1, where 1 represents optimal health and anything less than 1 represents the adverse impact of illness or disease on longevity and quality of life. For example, a health index score of 0.9 indicates that, on average, that population is living at 90 percent of its optimal health. In other words, the population could increase (to some level up to 10 percent) its average healthy lifespan by addressing the health conditions most impacting their local communities.

The BCBS Health Index score is calculated by using blinded claims data from more than 41 million commercially insured BCBS members annually and determining which condition a person has by mapping ICD-9 diagnoses codes to more than 200 health condition categories. The health impact of each condition on a person’s health is based on the estimated years lost due to the risk of premature death and the disabling effects of the condition. For each individual, these years of life lost are subtracted from the person’s optimum life expectancy (as determined by the person’s age and gender using actuarial life tables) to calculate an estimated life expectancy. This estimated life expectancy is then divided by the optimum life expectancy to get an estimate of health between 0 and 1 where “1” means the individual is living at their optimal health due to having no health conditions and a number less than 1 is a proportion of this optimal health. These individual-level estimates are then aggregated to create an overall “health score” for the population of interest.

Where “optimum life expectancy” is derived from an actuarial life table, “mortality” is years of life lost due to risk of premature death as determined by the Center for Disease Control (CDC), and “disability” is years of living with a disability based on the Institute for Health Metrics and Evaluation’s (IHME) disability weights. 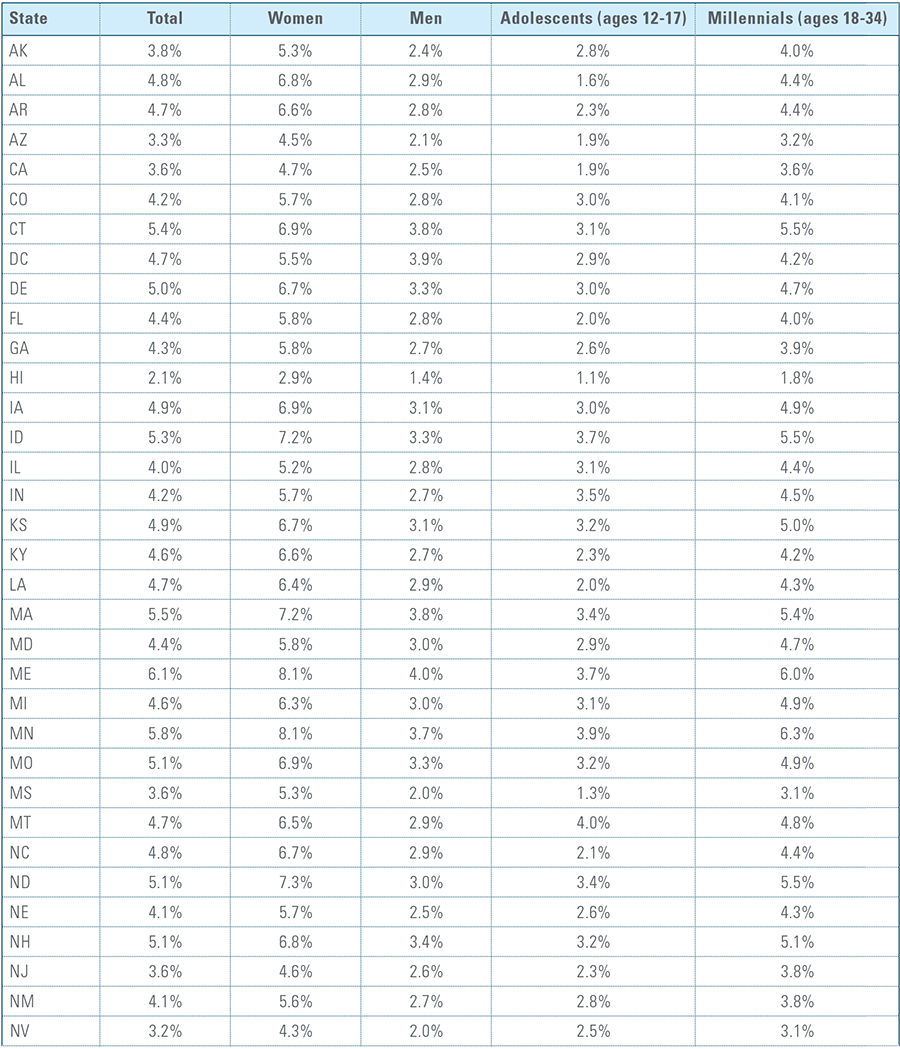 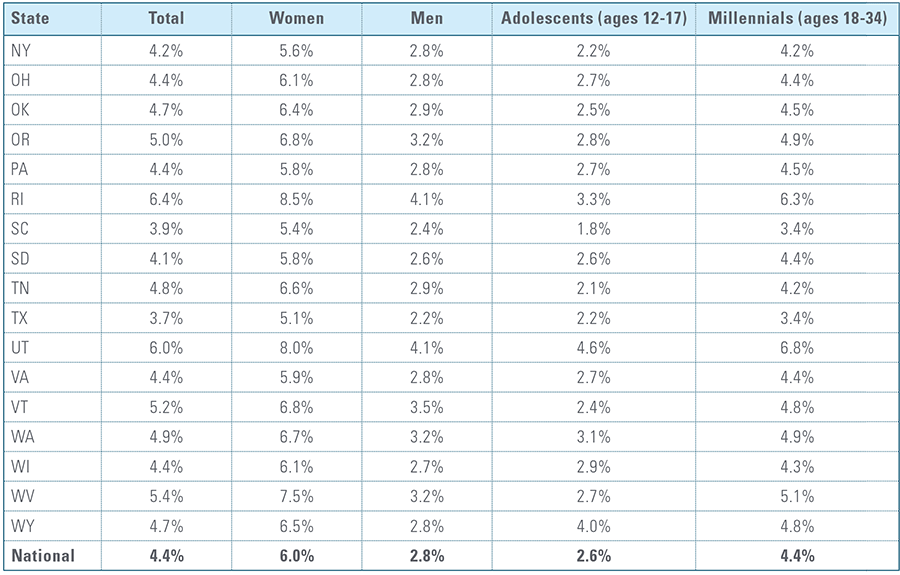 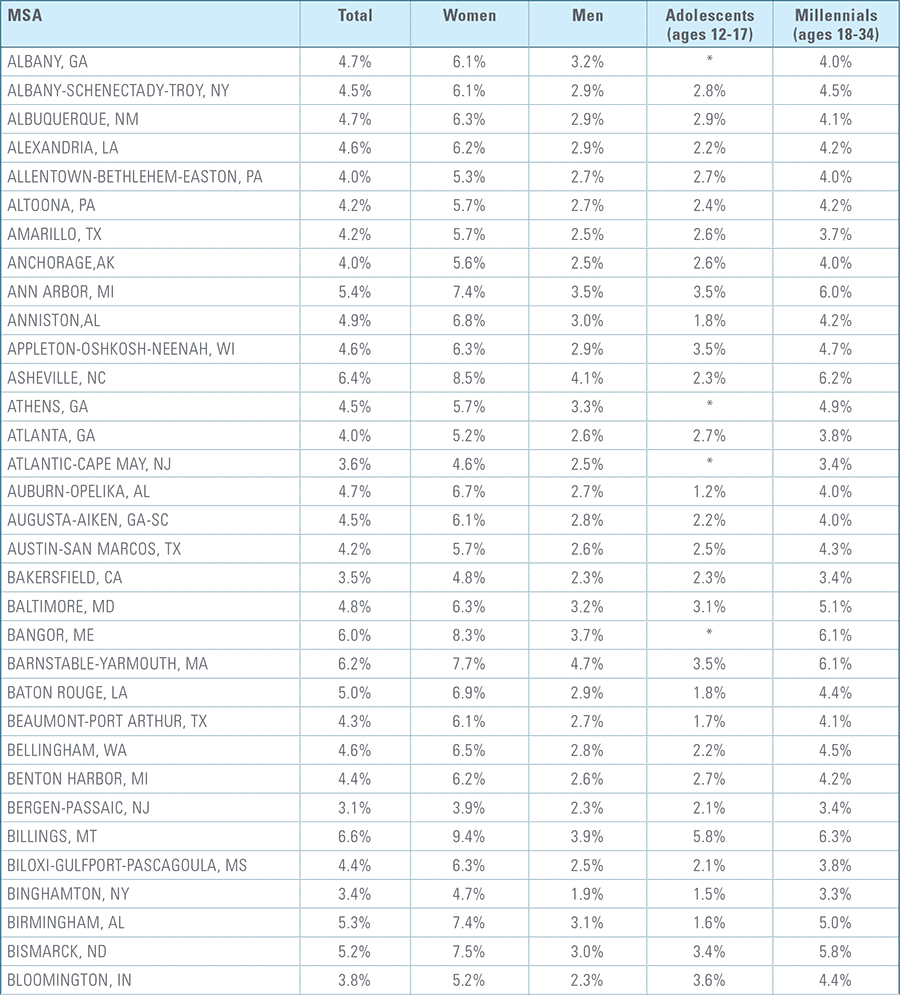 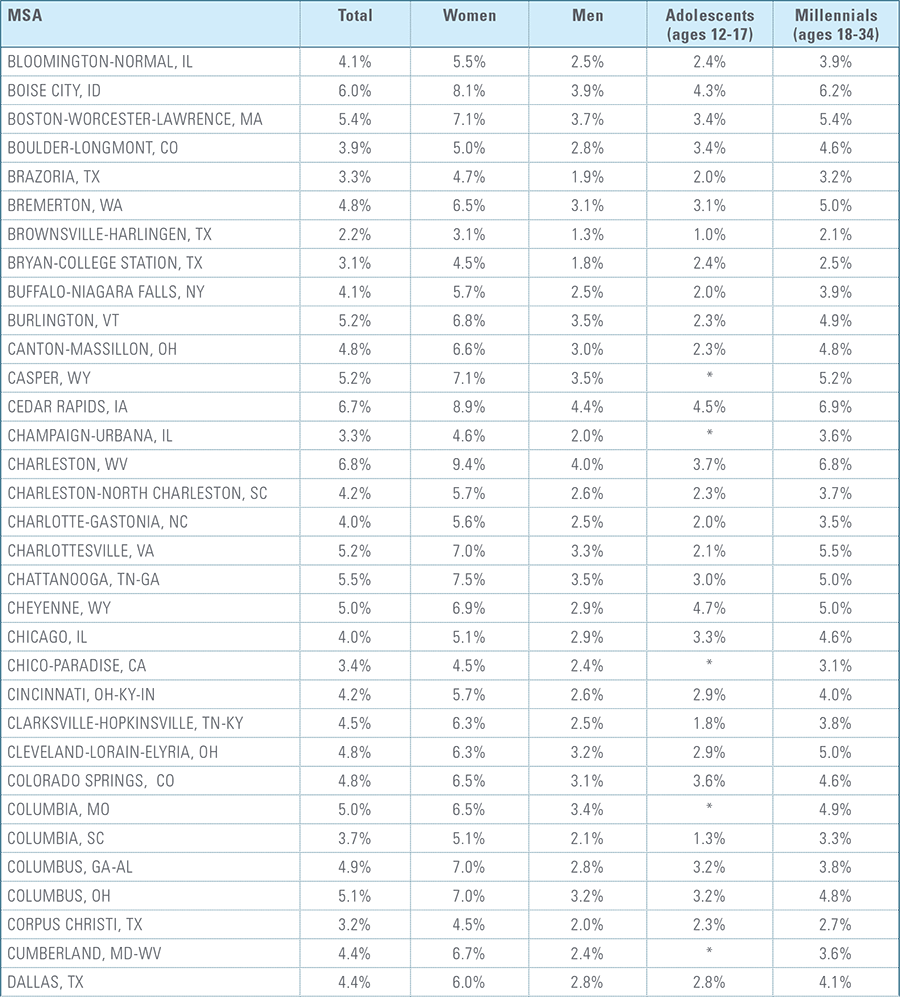 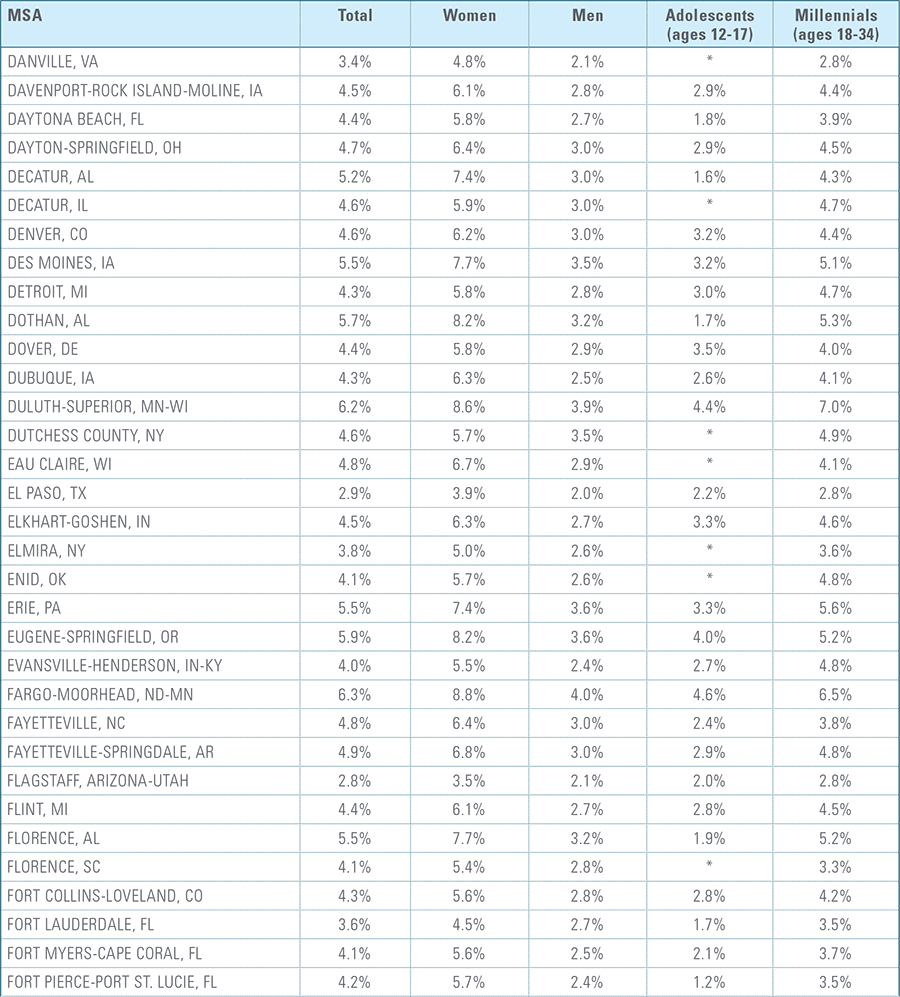 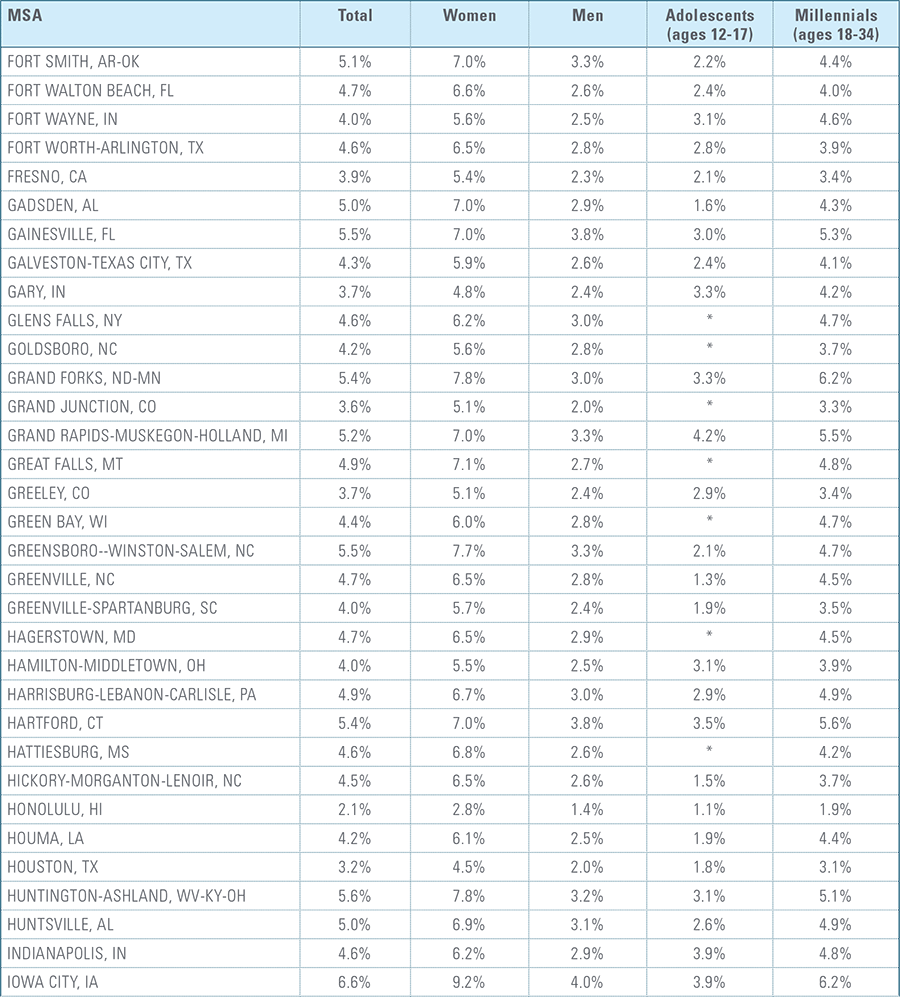 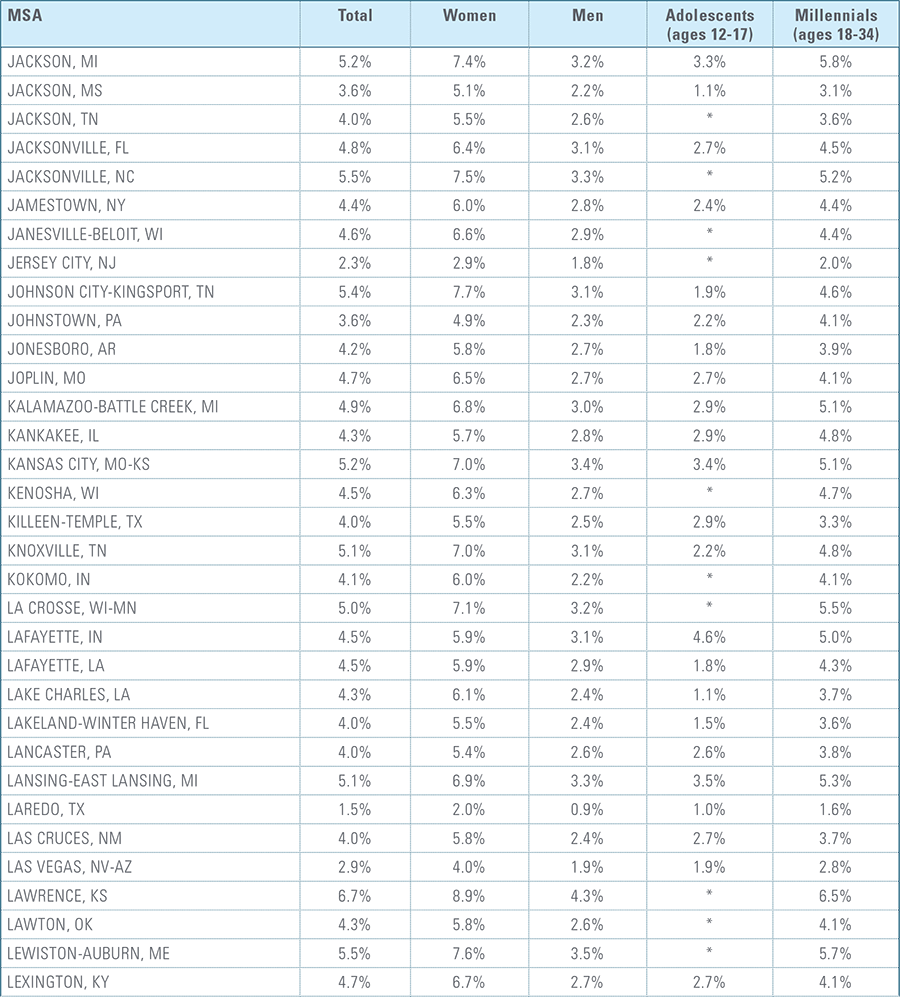 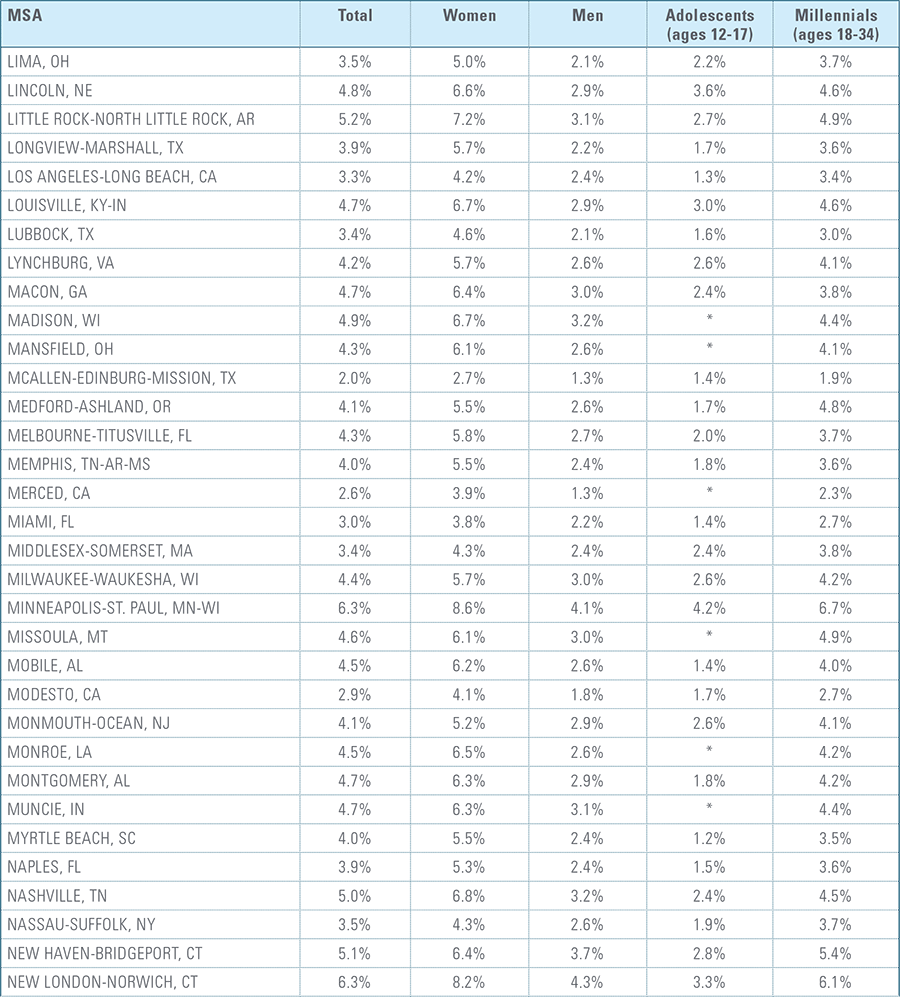 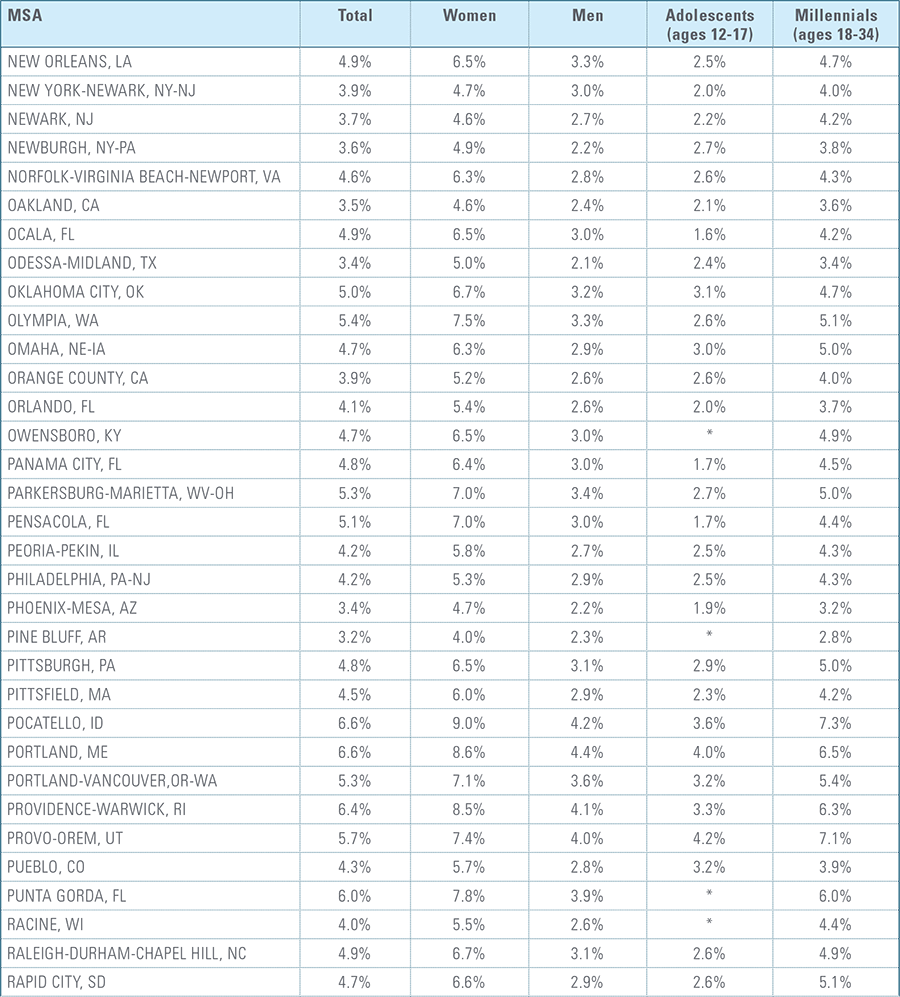 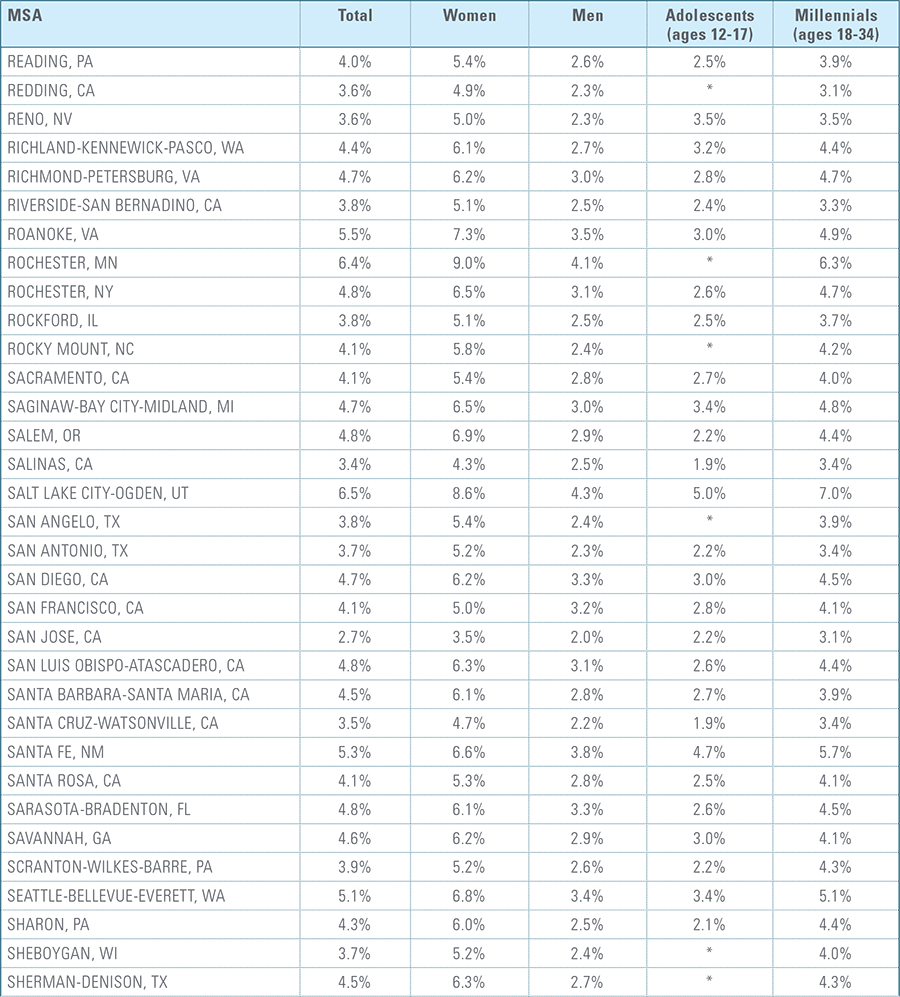 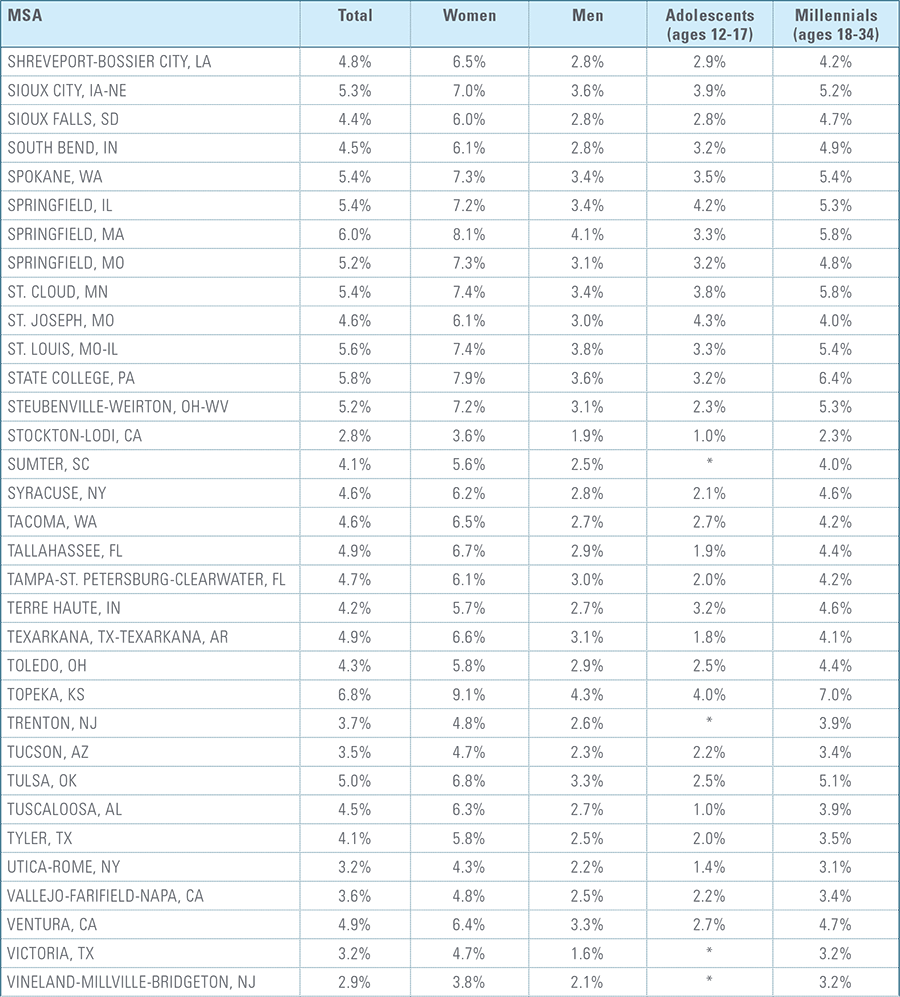 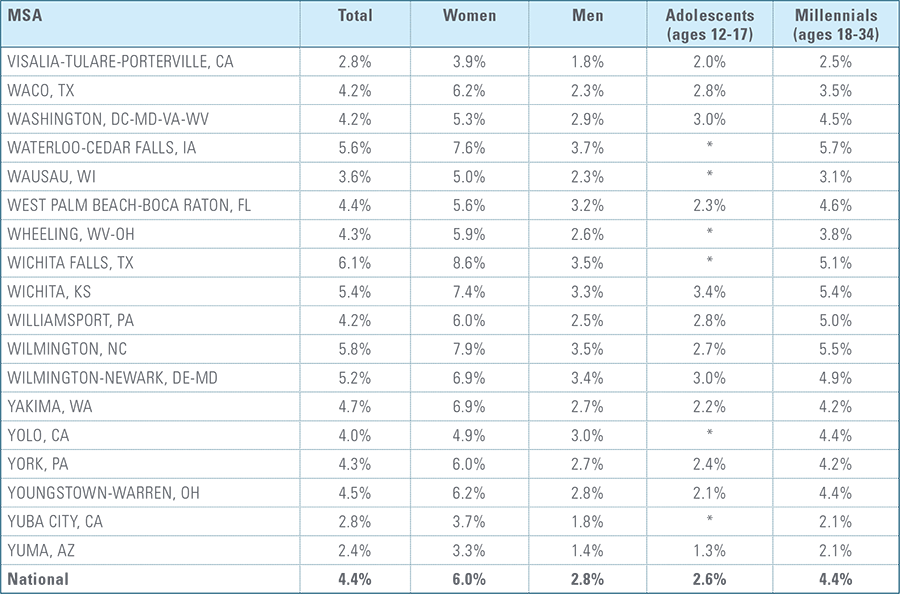 *MSAs must have data from at least 5,000 members to be included for total diagnosis rates and 1,500 members for demographic breakouts.

The patient-centered medical home concept continues to expand across the country as providers demonstrate that improving quality of care can simultaneously drive overall costs down for patients.
Share
Read
Article

Several risk factors are powerful predictors of a potential suicide attempt. Chaudhary and a team at Anthem launched a mental health wellness program that harnesses the power of data to quantify that risk and alert Anthem’s clinical team to reach out to at-risk members.
Share
Read
Article