Analysis of a seven-year trend of utilization, price changes and overall spending shows that prescription drug spending has increased 10 percent annually for Blue Cross and Blue Shield (BCBS) members since 2010, an overall rise of 73 percent.1 This upward trend is due to a small fraction of emerging, patented drugs with rapid uptake and large year-over-year price increases that are more than offsetting the continued growth in utilization of lower-cost generic drugs. These higher costs are being incurred by consumers and payers alike; while consumer out-of-pocket costs have risen just three percent annually for prescription drugs in total, they have risen 18 percent annually for patented drugs. Current trends suggest that this rapid rise in drug trend costs is likely to continue in future years.

Many of the new brand drugs that are contributing to the rapid rise in drug spending can have life-changing health benefits by treating or managing serious conditions. However, the treatment benefits of these drugs can only be fully attained if they remain affordable over the long term.

1. The cost trends cited in this report are derived from Rx claims data and therefore do not include the impact of drug rebates but does include network discounts. Rebates vary by a number factors (e.g., market segment, insurer, manufacturer, etc). Reporting trend in this way is an industry and actuarial practice for commercial business. 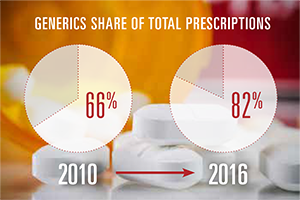 Despite significant increases in the adoption rate for generics, brand drugs still comprise a dominant share of overall drug spending. As Exhibit 1 shows, generics have expanded from 66 percent of all prescriptions in 2010 to nearly 82 percent in 2016. The drop in the share of brand drugs, however, has not lessened their contribution to total prescription drug spending. In fact, that contribution has increased slightly from 77 percent to 78 percent. As generics approach 90 percent of all prescriptions, their rate of increase in share will inevitably begin to slow down. As a result, their ability to offset the rising cost of brand drugs through share growth will diminish.

The average yearly rate of change in drug utilization, prices and total spending illustrates how brand prescriptions maintain such a large proportion of total drug costs. Exhibit 2 shows that total spending for generics is increasing only because of utilization; although generic drug utilization is up by nine percent, prices for these drugs have remained fairly flat. Meanwhile, brand drugs show a very different dynamic. Utilization is down for all brand drugs, but unit price has increased by an average of 17 percent each year, leading to a total increase in spending of 10 percent.

2. Note: Total spending is based on BCBS negotiated rates prior to any drug rebates. Only the first nine months of data were available for 2016. To create an estimate for the full year, the average difference in utilization and allowed spending between Oct. 1 through Dec. 31 and Jan. 1 through Sept. 30 in the six previous years were calculated and used to create an adjusted fourth quarter result. This was then added to the first nine months of 2016.

The cost dynamic for brand drugs can be more clearly understood if the market for these drugs is segmented into two: “mixed markets,” where brand drugs have a generic alternative, and “single-source markets,” where only patent-protected drugs exist. Data show that the single-source drug market contributes to significant increases in prescription drug spending. As Exhibit 3 illustrates, brand drugs in mixed markets experienced a 12 percent decline in utilization, a three percent increase in unit price and an overall 10 percent decrease in total annual spending. By contrast, single-source drugs, which make up 49 percent of all brand prescriptions in 2016, are increasing at a substantial annual rate in terms of utilization and price, generating a 25 percent increase in total annual spending—more than double the rate of increase in spending on all drugs.

Breaking down single-source drugs by broad drug group classifications as shown in Exhibit 5, reveals that a majority of drug groups had double digit price increases from 2010 to 2016, ranging from eight percent annually for patented asthma drugs to 30 percent for dermatological drugs. 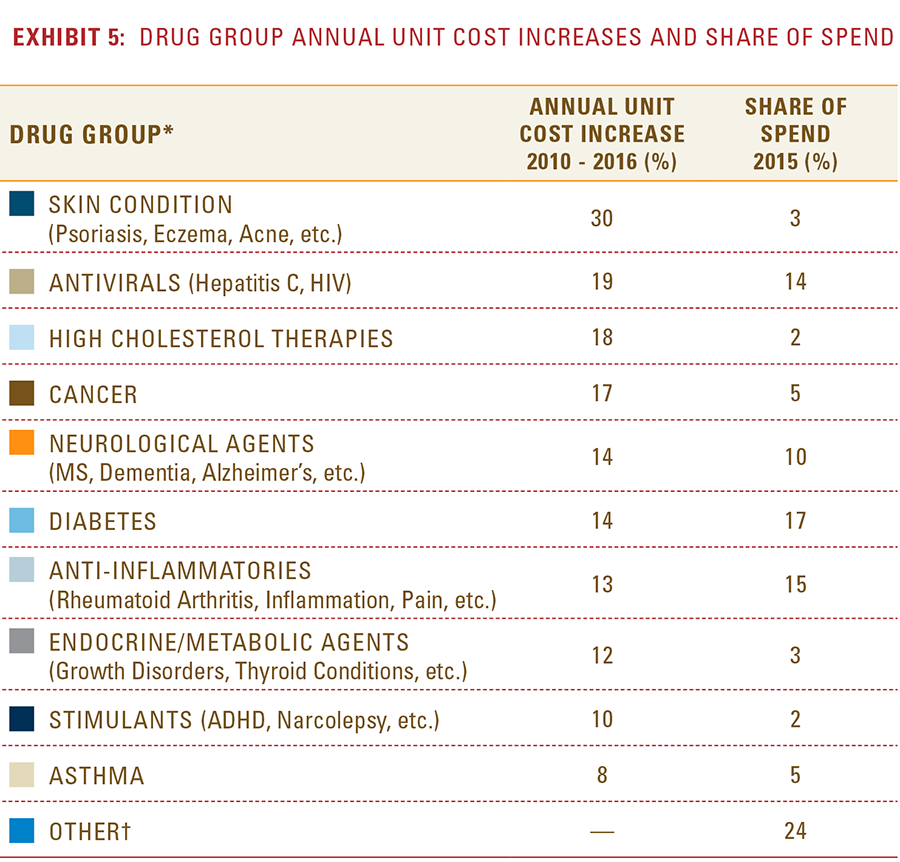 The top 25 single-source drugs make up more than half of drug spending in this market. The list, presented in Exhibit 6, shows that nearly all had rapid year-over-year growth in both utilization and unit price, with annual spending increases well into double digits. As noted in the introduction, the high cost of these drugs needs to be weighed, on a case-by-case basis, against their potential effectiveness in treating or managing serious conditions.

Nearly half of these drugs (12 of 25, which are shaded in Exhibit 6) are considered “specialty drugs5”. It is estimated that 17 of these drugs will have a long road to generic competition, and price relief is far from certain. Reasons for this delay include:

As a result, low-cost generic alternatives to the majority of these drugs cannot be expected anytime soon. 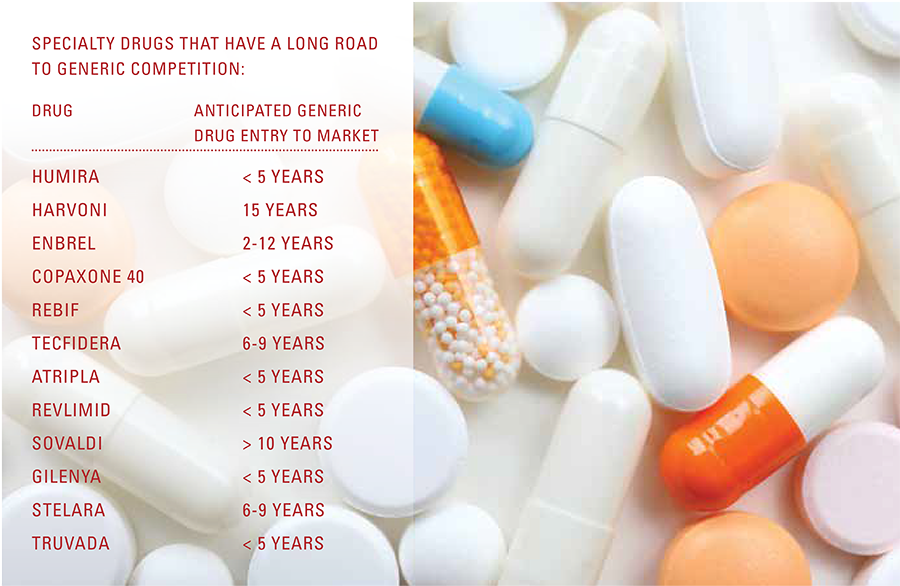 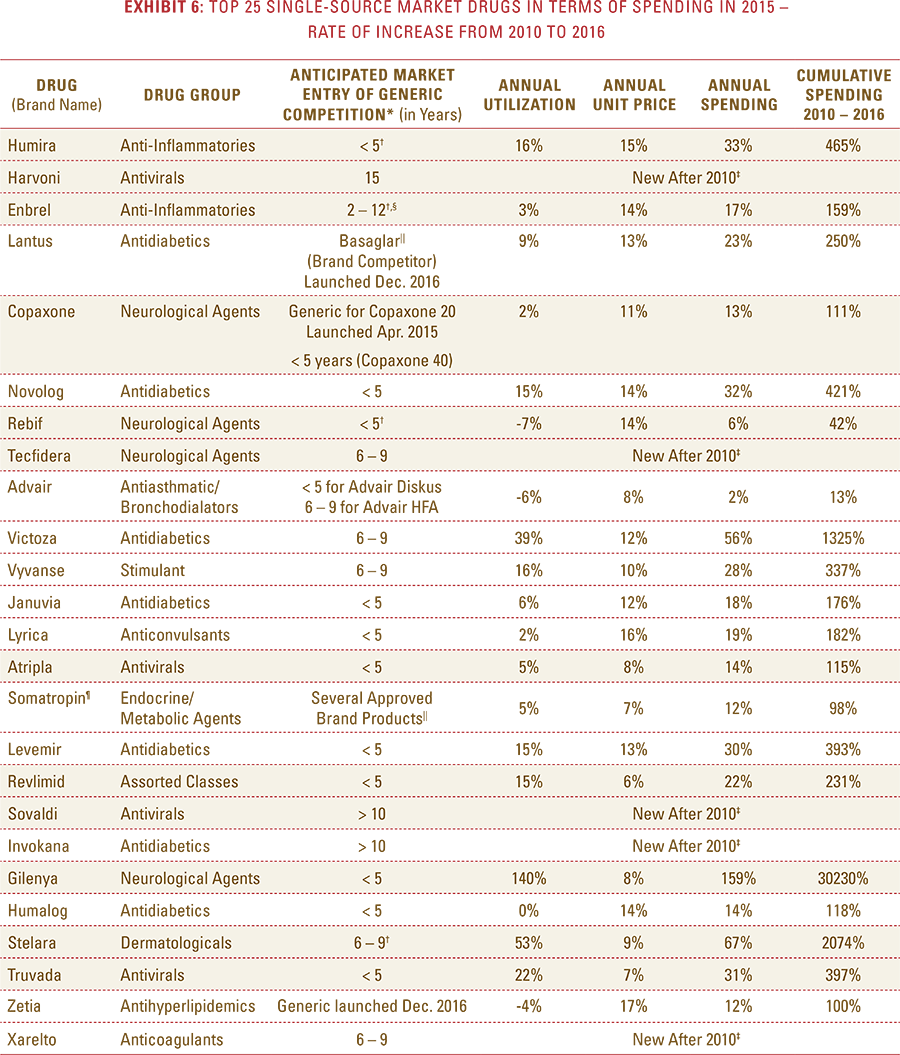 * Launch dates are estimates only made by a combination of patent life remaining, additional exclusivity remaining and the outcome of patent litigation between manufacturers.
† These four drugs are biological drug products that requires a biosimilar replacement that is harder to produce than a typical generic. Biosimilars for Humira and Enbrel have already been approved by the FDA but launch has been delayed due to complexities of manufacturing, issues with interchangeability with the original innovator product, unknown market acceptance by prescribers and consumers and uncertain price savings, but far less than a typical generic.
‡ Drugs introduced after 2010 are not shown here because changes in their utilization and pricing are affected by new product “ramp up.” We have provided the results for these drugs in Exhibit A1 in the Appendix.
§ The window for Enbrel is highly variable due to extended patents in 2011 and 2012 and current litigation.
|| Basaglar and several brand Somatropin products approved through 505(b)(2) pathway, see bullet above.
¶ Brand names include Genotrope, Omnitrope, Norditropin and Humatrope.

The introduction of generics into the marketplace lowers overall drug cost for the particular drug. For example, the total spending of Lipitor (atorvastatin) and its generic alternatives declined 78 percent between 2011 and 2016 following the loss of Lipitor’s exclusivity and the release of generic alternatives. Similarly, the total spending for Avapro (irbesartan) and its generics decreased 80 percent from 2011 to 2016. These large drops in cost are due to the rapid adoption of generics rather than price reductions among the brand drugs. Exhibit 7 illustrates this with data on two drugs (with four additional drugs in appendix Exhibit A2) for which generics were introduced into the market between 2011 and 2012. With remarkable consistency, generic drug prices initially start higher—though below the brand drug price—and then drop as more manufacturers bring a generic product to market. The brandname manufacturers did not compete on price once generic competitors become available, and this large price disparity between the brand drug and its generic alternative causes consumers to switch rapidly to the generic, raising its share to 90 percent or more within a few years. The shift in use results in the dramatic drop in overall spending noted in the tables. 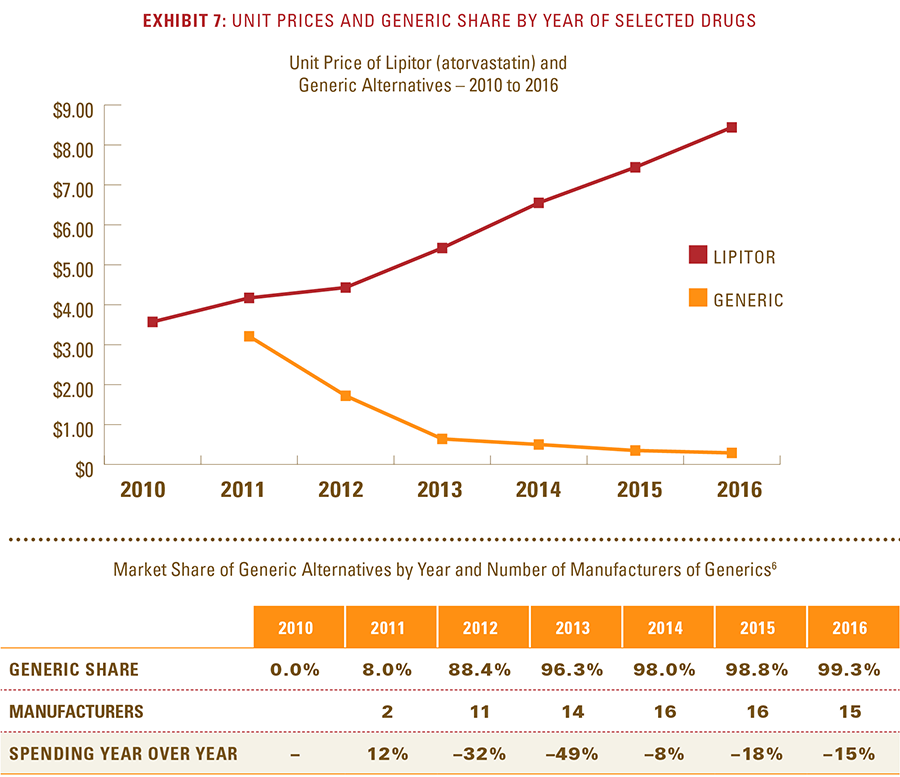 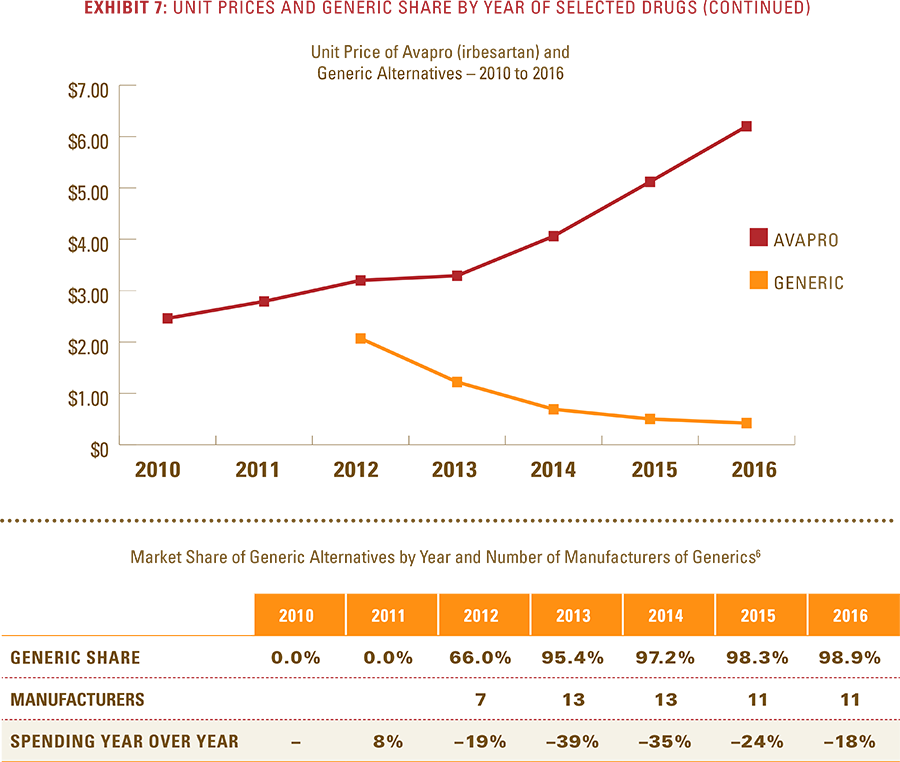 Over the seven-year study period, a limited number of patent-protected prescription drugs have driven the entire year-over-year increase in drug costs. Generics have only managed to offset the cost growth of these patented drugs by taking an increasing share of total prescriptions. Despite generics accounting for 82 percent of all prescriptions in 2016, patented drugs account for 63 percent of total spending. This 63 percent share of spending is more than a two-fold increase over their share in 2010, and this rise shows no signs of leveling off. Moreover, if the expansion of generic share slows down or if the number of drugs qualifying for patent protection increases in the coming years, these cost trends could rise even faster.

BCBS companies help customers maximize their prescription coverage to get the drugs they need at the most affordable cost. For example, members are encouraged to use generic prescription medicines, mailorder delivery and home infusion, when available, and follow medication plans as prescribed by their doctors.

The report examines the medical claims of more than 30 million BCBS commercially-insured members per year (non-Medicare) and more than $208 billion in prescription spending from January 2010 through September 2016.* Unit prices were computed as the total cost of the prescription divided by the days supplied, or the average daily price of the prescription.

* Only the first nine months of data were available for 2016. To create an estimate for the full year, the average difference in utilization and allowed spending between Oct. 1 through Dec. 31 and Jan. 1 through Sept. 30 in the six previous years were calculated and used to create an adjusted fourth quarter result. This was then added to the first nine months of 2016. 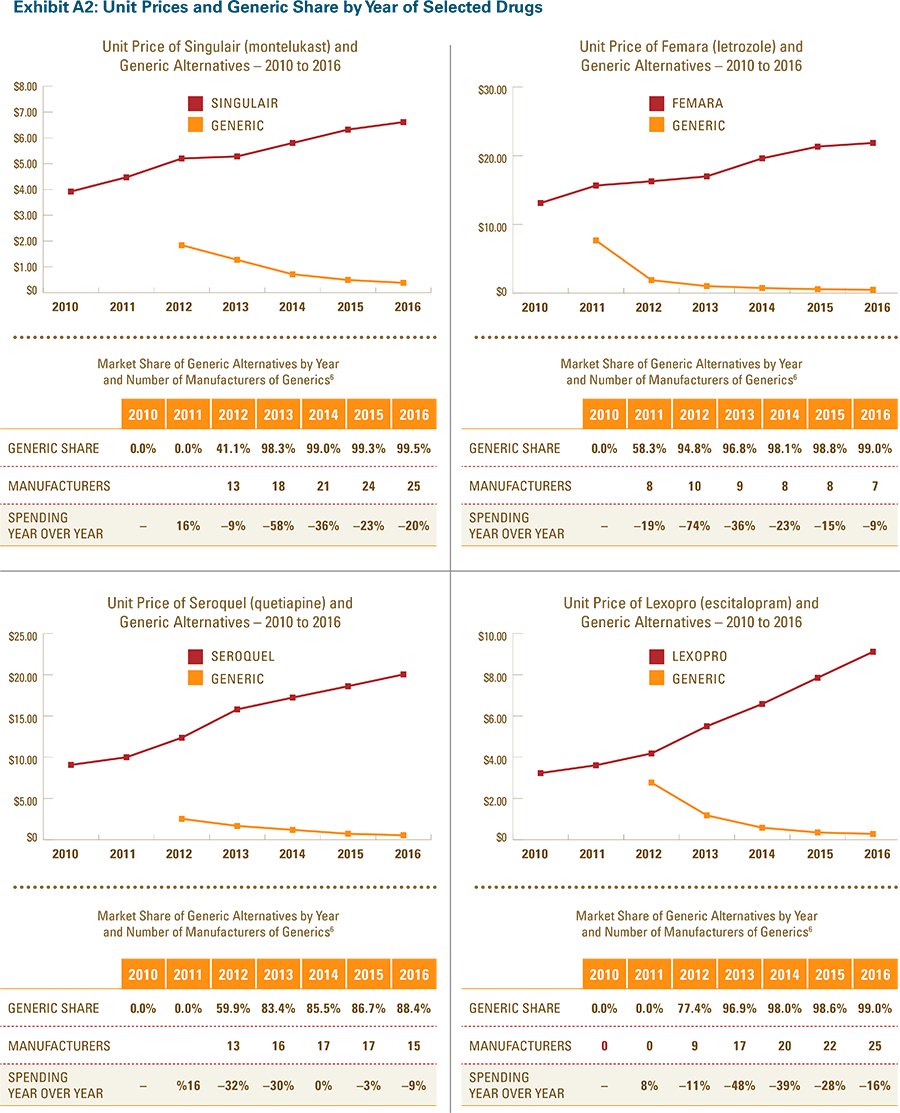