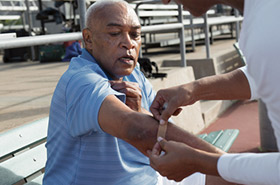 CareFirst BCBS’s PCMH initiative1 includes more than 4,000 primary care providers (PCPs) and nurse practitioners – more than 80 percent of all PCPs in the CareFirst service area, which includes parts of Northern Virginia, the District of Columbia and Maryland. These participating providers are coordinating care for approximately 1.1 million CareFirst members. PCPs can practice in established groups or “virtual” panels that help enable accurate quality and financial measurement and provider “peer-review” of one another’s performance. The model includes an immediate double-digit increase in the primary care fee schedule and new payments for care plans for chronically ill members. Participating providers are eligible for additional fee increases based on performance. CareFirst local care coordinators partner with PCMH practices to help coordinate care, such as assuring post-discharge coordination, making physician office visits to discuss patients’ care plans, and providing regular web-based updates to a record available to the entire care team.

CareFirst has seen the overall rate of increase in medical care spending for its members slow from an average of 7.5 percent per year, in the five years preceding the program’s launch, to 3.5 percent in 2013. Beyond the encouraging overall medical care spending trends, CareFirst continues to see strong performance by its PCMH program when measured against the expected cost of care for CareFirst members covered by the program. Healthcare costs for the 1.1 million CareFirst members covered by PCMH were $130 million less than projected in 2013; 3.2 percent less than the expected cost of care for this population of patients. The savings has risen from 1.5 percent in 2011 and 2.7 percent in 2012. In all, the PCMH Program has accounted for $267 million in avoided costs when measured against the projected cost of care from 2011 to 2013.