What is a Surprise Medical Bill?

Imagine you have an accident and paramedics bring you to a hospital that is in your insurer’s network. But what if the anesthesiologist who happens to treat you isn’t in that network? Out-of-network providers could charge for the difference—or the balance—between what they bill and what a health insurance plan covers. Prior to 2022, that could have left you on the hook for a lot more money than you might have owed for an in-network doctor.

That practice is now against the law.

What is the No Surprises Act?

The No Surprises Act (NSA) bans bills for a visit to an emergency department or other in-network facility from an out-of-network provider a patient did not, or could not, choose. The NSA protects patients from receiving surprise, or so-called “balance” bills, from out-of-network health care providers at in-network hospitals or other facilities.

Because of the NSA, there is now a process for providers and health insurers to resolve disagreements about the bill. It also gives patients the right to file a dispute.

Policymakers and lawmakers may not have known just how effective the law would be. In October 2021, the U.S. Departments of Health & Human Services, Labor, and Treasury estimated there would be about 17,000 claims submitted for resolving disagreements. According to new research, they underestimated. 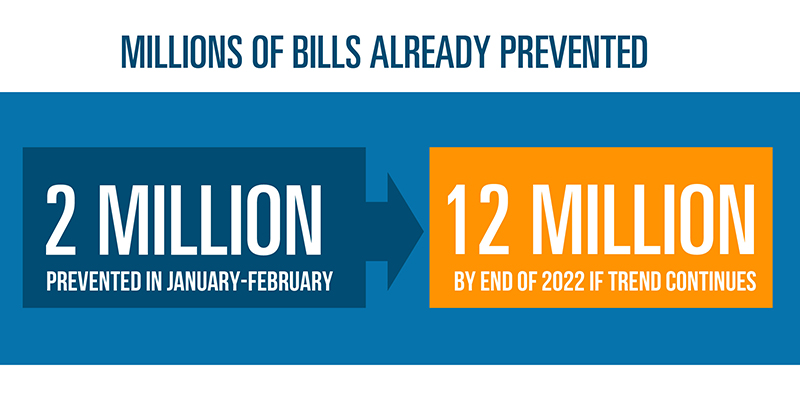 A recent analysis by the Blue Cross Blue Shield Association (BCBSA) and AHIP, a national association whose members provide health care coverage, services and solutions, found that, in the first two months of 2022, the NSA prevented more than two million potential surprise medical bills across all commercially insured patients. If only a fraction of these claims were submitted for resolving disagreements about the charges, that number would still drastically exceed the government’s estimate. If the trend continues, more than 12 million surprise bills will have been avoided by the end of 2022.

“There is no room for surprise medical bills in a health care system that puts people first,” said Kim Keck, BCBSA president and CEO. “As recently as last year, an emergency visit to the hospital may have left patients on the hook for steep, surprise medical bills. The No Surprises Act has not only put an end to this loophole, but it has provided undeniable financial protection to millions of Americans.”

In April 2022, AHIP and BCBSA surveyed health insurers offering commercial health insurance coverage and group health plans. The goal was to gather information on the number of surprise bills submitted in the first two months of 2022. Those bills were for:

The survey found that 0.23% of all commercial claims were potential surprise bills. That may sound insignificant, but multiply it by the total number of commercial health insurance claims and you arrive at this figure: the NSA headed off more than two million potentially surprise bills during the first two months of 2022.

The survey went to 83 commercial health plans. Thirty-one, representing 115 million commercial enrollees, or 54% of the total commercial market, responded. The survey asked plans to provide their current commercial enrollment and the number of claims they received and paid in January and February 2022. The survey then asked how many of those claims might have been surprise bills, or subject to the NSA. Researchers used 2020 Census data and the IBM Commercial Claims Dataset to derive a national estimate. Again, the results were more than policymakers and lawmakers expected. It means the law is working.

Reducing the number of surprise bills is one piece of a larger effort to make health care more affordable. Blue Cross and Blue Shield companies continue to make strides to improve affordability across the country, from aligning what doctors are paid with the quality, not the quantity, of care they provide, to using technology to identify patients who may need more support to stay healthy and avoid more expensive care.

AHIP is the national association whose members provide health care coverage, services, and solutions to hundreds of millions of Americans every day. We are committed to market-based solutions and public-private partnerships that make health care better and coverage more affordable and accessible for everyone. Visit www.ahip.org to learn how working together, we are Guiding Greater Health.