The opioid addiction epidemic is one of America’s foremost health crises. According to the most recent statistics from the Centers for Disease Control and Prevention (CDC), opioids (including prescription opioids and heroin) kill more than 33,000 people annually, which is more than any year on record and more than at the peak of the human immunodeficiency virus (HIV) epidemic.1 Opioid abuse/overdose is considered a leading cause of shortened life expectancy in the U.S.2

The nation’s opioid epidemic reflects a complex set of circumstances. The pattern of opioid prescribing—including dose and duration-—and the patient’s risk factors of age, gender and condition are major determinants of whether a patient becomes dependent.3 As cases of opioid use disorder skyrocket among the commercially insured, this data shed new light on the specific prescribing practices and use that pose a significant threat to patient health.

Twenty-one percent of Blue Cross and Blue Shield (BCBS) commercially-insured members filled at least one opioid prescription in 2015. Data also show BCBS members with an opioid use disorder diagnosis spiked 493 percent over a seven year period. The report analyzes medical claims from BCBS commercially-insured members diagnosed with opioid abuse disorder from 2010 through 2016.4 Specifically, it looks at the degree of prescription opioid use—in terms of the dose and duration of opioid prescriptions—and how this relates to opioid dependence.

In this report, prescription regimens were categorized on the basis of duration (number of days) and dosage (strength), consistent with CDC convention. For duration, regimens greater than 90 days are considered long duration and those less than 90 days short duration. High dosage is defined in terms of the morphine-equivalent daily dose being more than 100 while low dosage is defined as a morphine-equivalent daily dose of less than 100.

For the 6.3 million unique patients in 2015 in this data set, prescription regimens break out as shown in Exhibit 1. 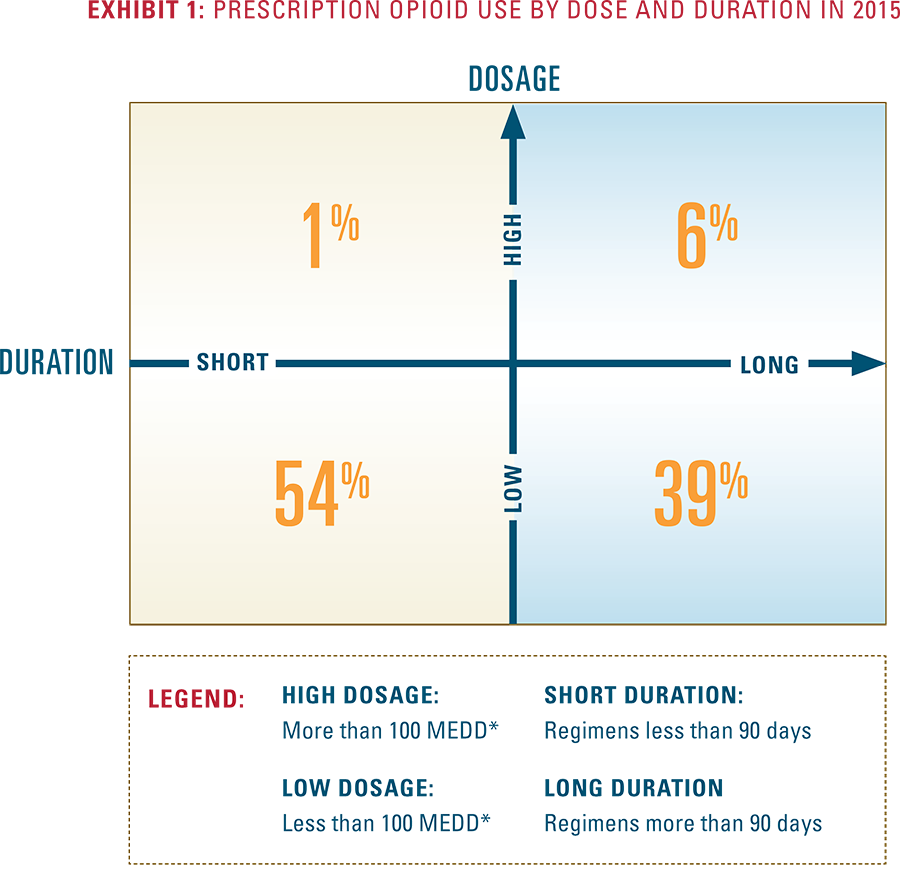 Opioid Use Disorder and Type of Prescription Regimen 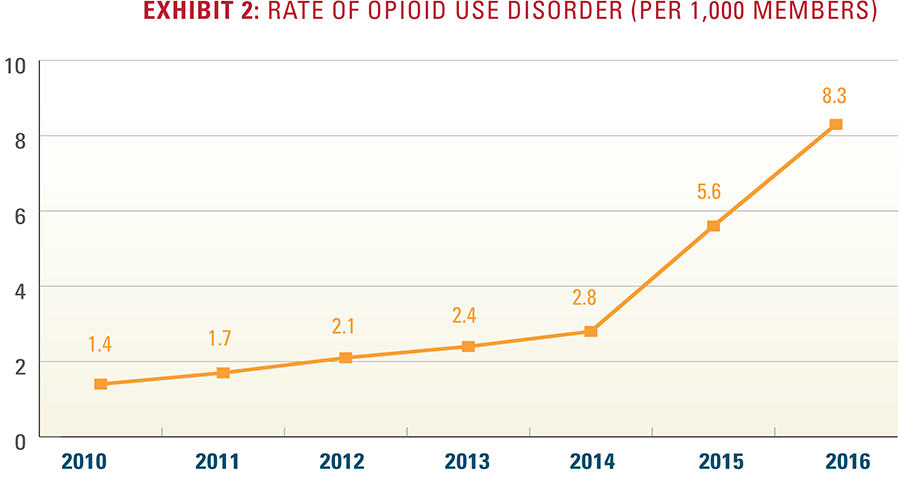 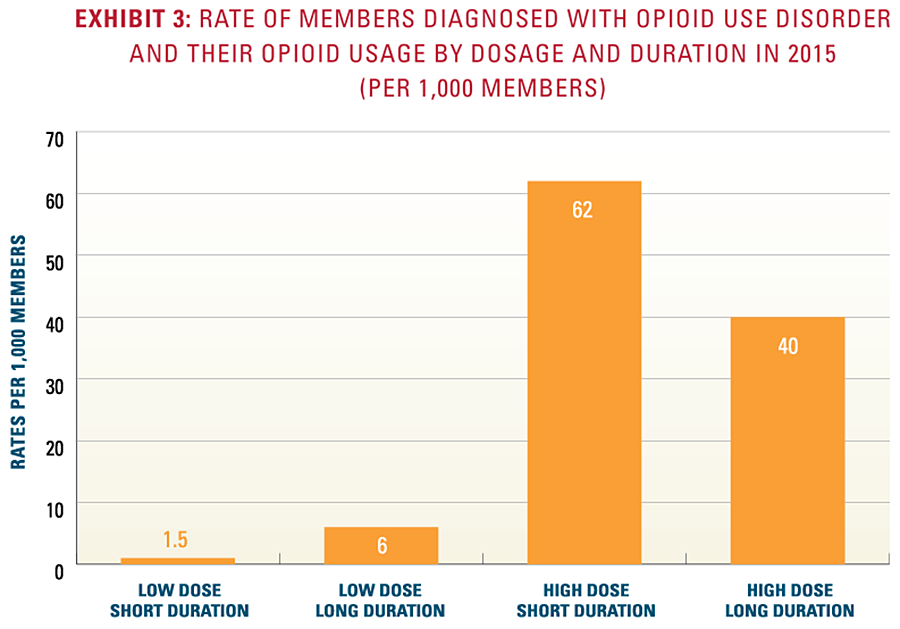 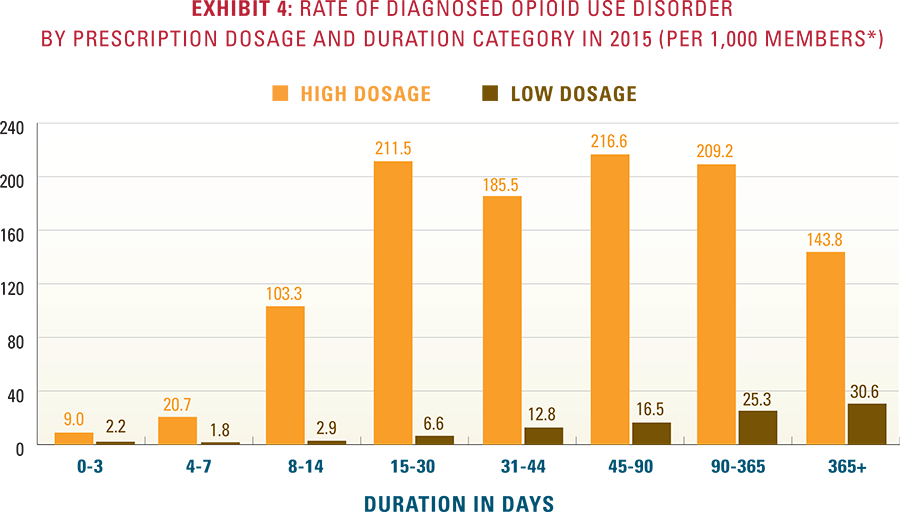 Policy debates on preventing opioid use disorder have focused recently on patterns of short-term opioid use. The breakout durations less than 90 days (55 percent of total users) is shown in Exhibit 5. Approximately 45 percent of this group had prescriptions of seven or fewer days with the most common duration being four and seven days. 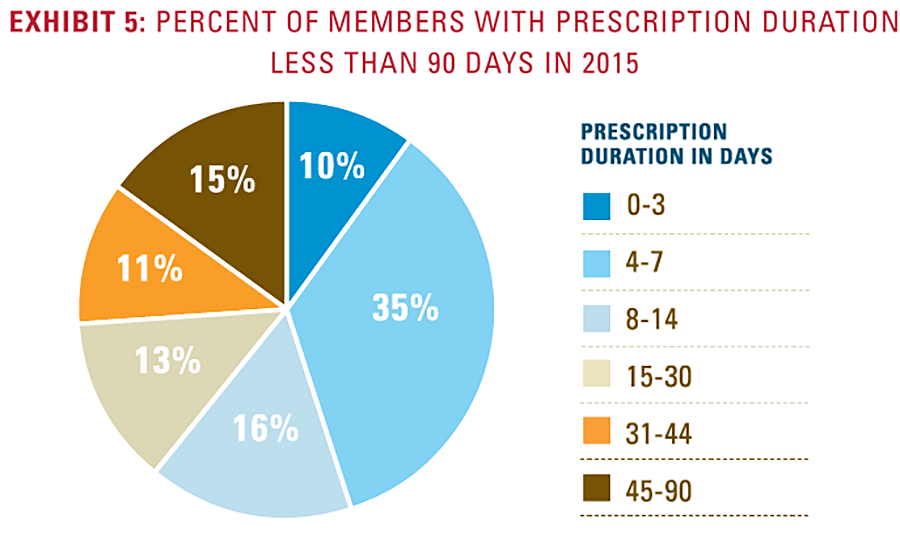 Opioid Use and Gender

Women have higher rates of prescription opioid use than men (see Exhibit 6). 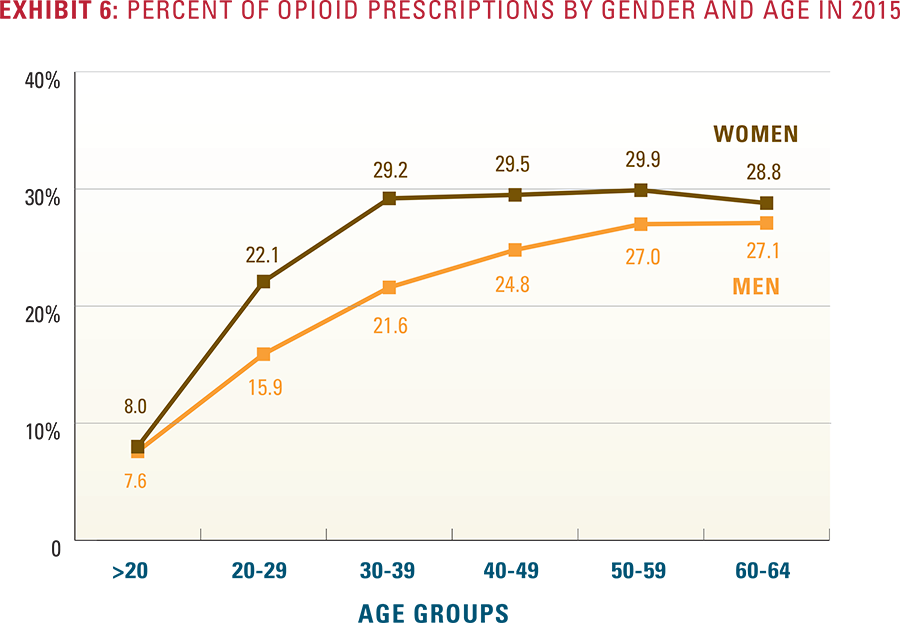 However, younger women have lower rates of opioid use disorder than men. This trend reverses after the age of 45 for women (see Exhibit 7), consistent with the finding that women age 45 and older also have longer prescription durations. 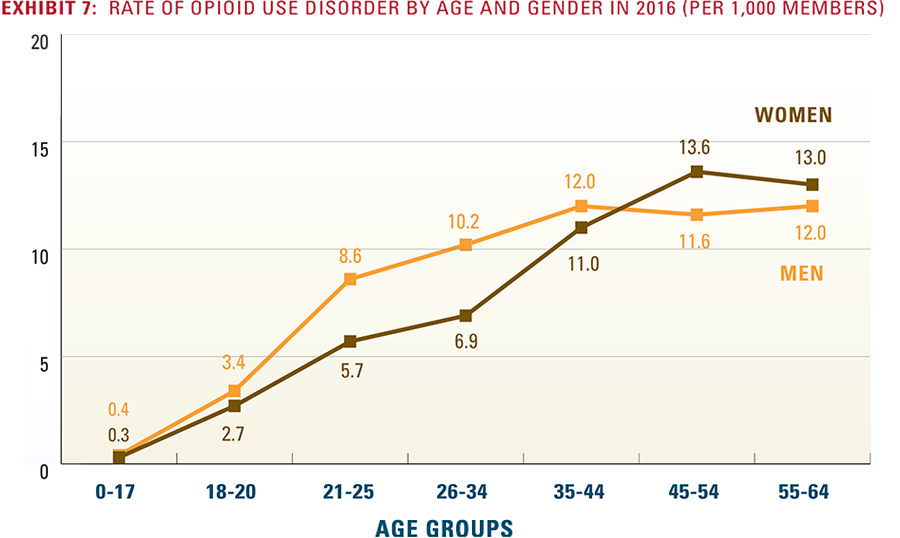 Regional Variation in Opioid Use Disorder 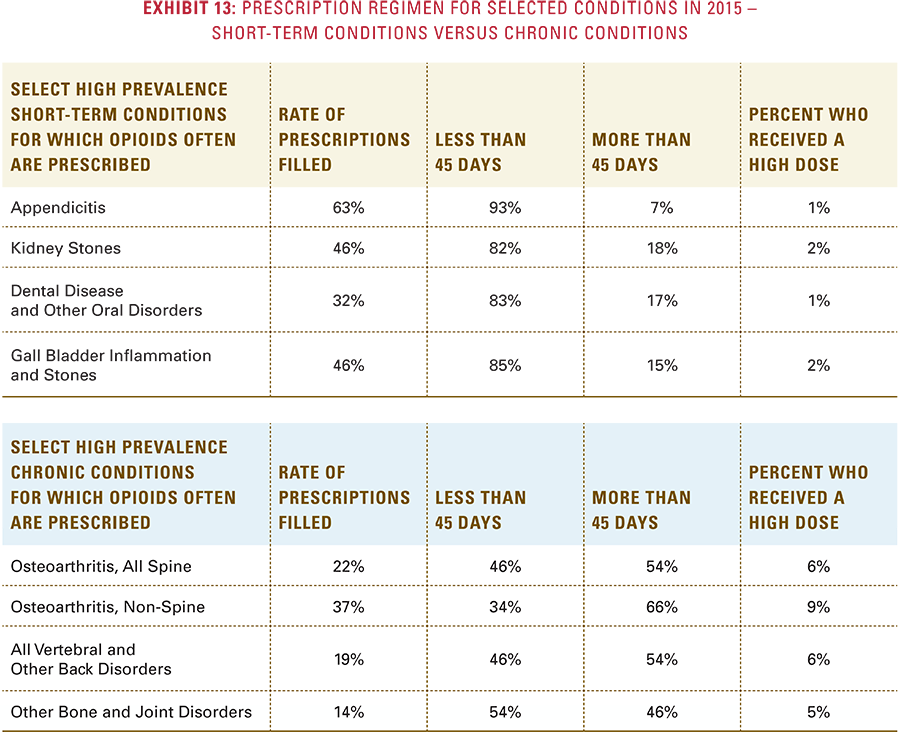 The BCBS Health Index® identifies substance use disorder as the fifth most impactful condition affecting the health of commercially-insured members in the U.S. Addressing the opioid epidemic is one of America’s greatest public health challenges. Understanding the trends of prescription opioid use, which is both cause and effect of opioid addiction, helps providers, researchers and policymakers better confront this crisis. It will take a collaborative effort of health providers, insurers, communities and all levels of government working together to develop solutions that effectively meet community needs. For more information about BCBS companies’ local efforts to combat the opioid epidemic, visit https://bcbs.com/about-us/capabilities-initiatives/addressing-americas-opioid-addiction.

This is the thirteenth study of the Blue Cross Blue Shield: The Health of America Report series, a collaboration between the Blue Cross Blue Shield Association and Blue Health Intelligence, which uses a market-leading claims database to uncover key trends and insights into healthcare affordability and access to care. In addition, Axial Healthcare, an independent company, provided pharmacy consultancy services to BCBSA for this report.

The report examines the medical and pharmacy claims of more than 30 million BCBS commercially-insured members per year from 2010 to 2016 to measure the number of members with an ICD code-based diagnosis of opioid use disorder and prescriptions for medication-assisted therapy (MAT). All eligible members under age 65 were included. Pharmacy data for prescription opioid use was limited to the year 2015 and 29.2 million members to create a year point-in-time snapshot of prescription opioid use. Members with diagnoses of cancer or services for palliative care and hospice care were excluded.

Dose and duration of opioid regimens were provided by Axial Healthcare. Dose and duration regimens were calculated for each member level based on pharmacy data, which included the potency of the opioid prescribed, the dosage and the number of doses to be taken per day. The total number of unique opioid regimens and the number of unique members who were prescribed and filled an opioid in 2015 were counted by age, gender and state of residence. Rates were computed on a per 1,000-member basis or percentage basis, where noted. Members with diagnosed conditions present in 2015 were measured in aggregate to assess how many members with a certain health condition were given an opioid and the dose and duration the opioid prescribed.

Anthem Blue Cross and Blue Shield discovered that only 18% of members diagnosed with OUD, likely a majority of them millennials, were receiving this holistic treatment. So they set out to double that number.
Share
Read
Article