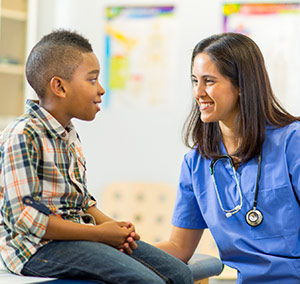 Since 2010, antibiotic prescription rates in the U.S. have been declining among the commercially insured population, falling 9 percent during this period. This decline indicates that considerable progress is being made in public health campaigns to limit the use of antibiotics and prevent the development of antibiotic-resistant bacteria.

This research looks at four categories of antibiotics across age, gender, geography and setting of care.

Narrow-spectrum antibiotics are used to treat a narrow range of bacteria and are considered the best initial recommended treatment for specific conditions. Examples include penicillin G and first-generation cephalosporins. Narrow-spectrum antibiotics are typically only effective against bacteria that have not developed resistance, which may include conditions such as uncomplicated skin or urinary tract infections.

Reserved antibiotics are narrow-spectrum, but are not considered the initial recommended treatment for some conditions. Reserved antibiotics should only be used for bacteria that have developed resistance to other antibiotics, such as resistant skin infections caused by MRSA (methicillin-resistant staphylococcus aureus). Examples include vancomycin, linezolid and aztreonam.

Antibiotic prescription fill rates in the U.S. have been declining among the commercially insured population since 2010 (see Exhibit 1). There has been a 9 percent decline in fill rates from 2010 to 2016. 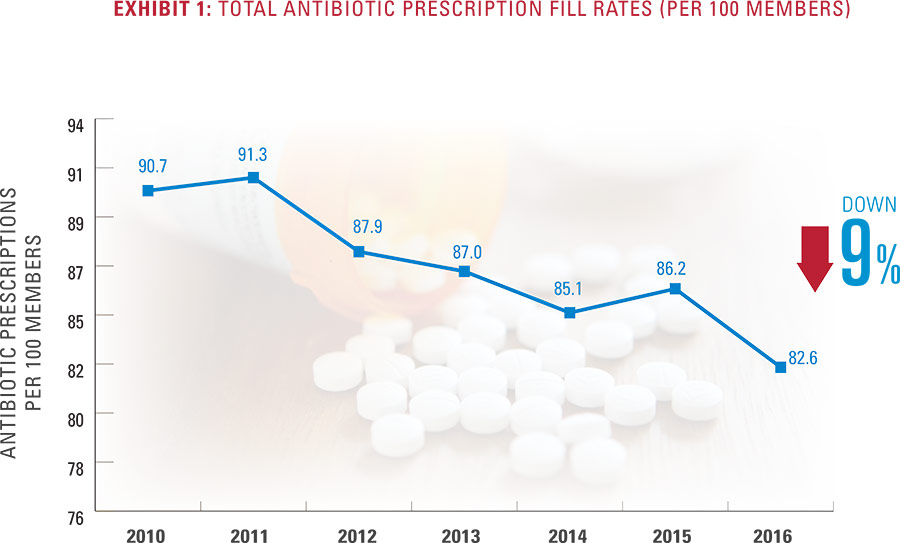 Antibiotic prescriptions filled for children ages 0 to 17 dropped 16 percent overall from 2010 to 2016 compared to just 6 percent for adults. This decrease suggests that the national push to reduce use of antibiotics in children has had marked success (see Exhibit 3).

Women fill 40 percent more antibiotic prescriptions than men. However, relative declines in prescription fill rates were similar across both groups, 8 percent and 9 percent respectively, between 2010 and 2016. 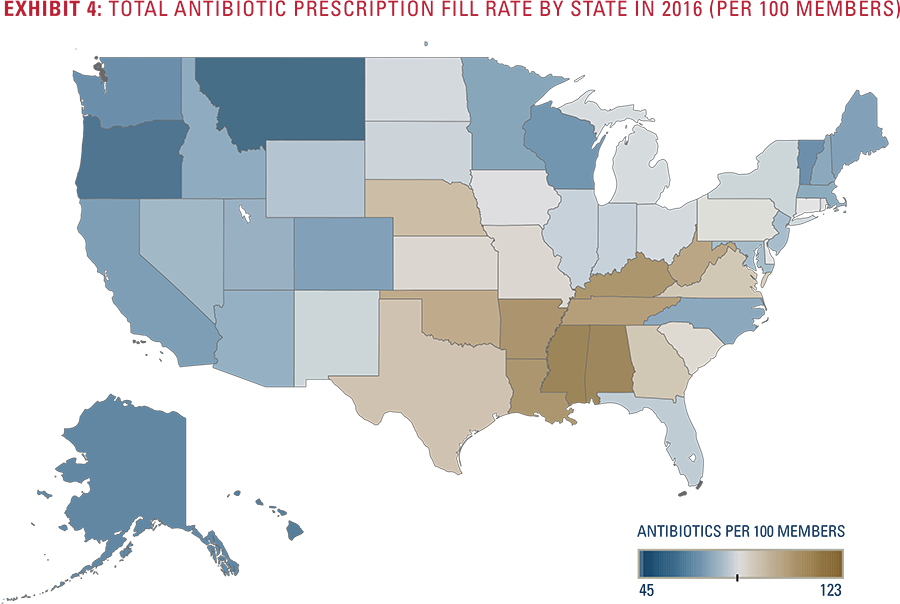 The antibiotic prescription fill rate is 16 percent higher in rural counties than in urban counties. Broad-spectrum antibiotic fill rates are even higher in rural areas at 19 percent (see Exhibit 5). However, this difference is not nearly as large as the state level differences cited above. 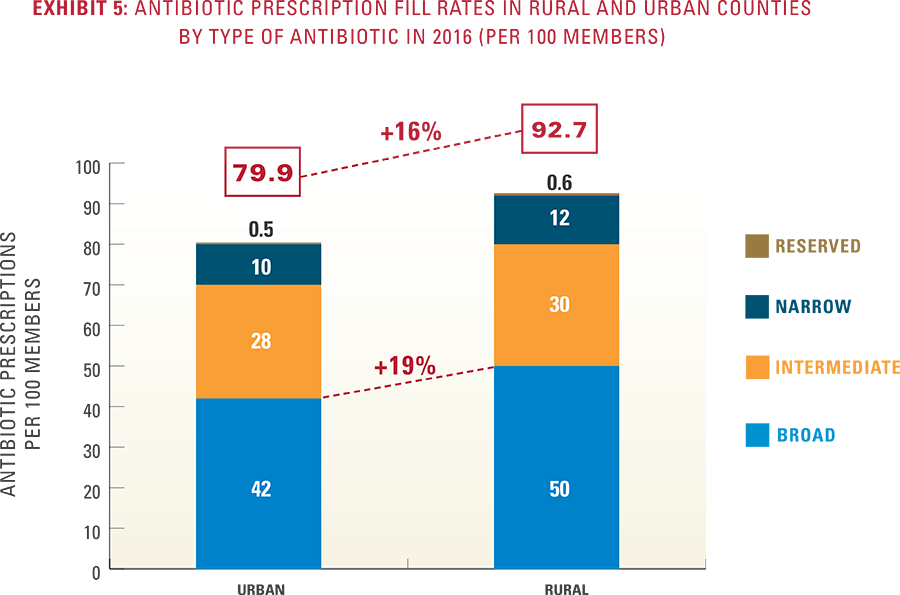 Antibiotic Prescriptions by Setting of Care 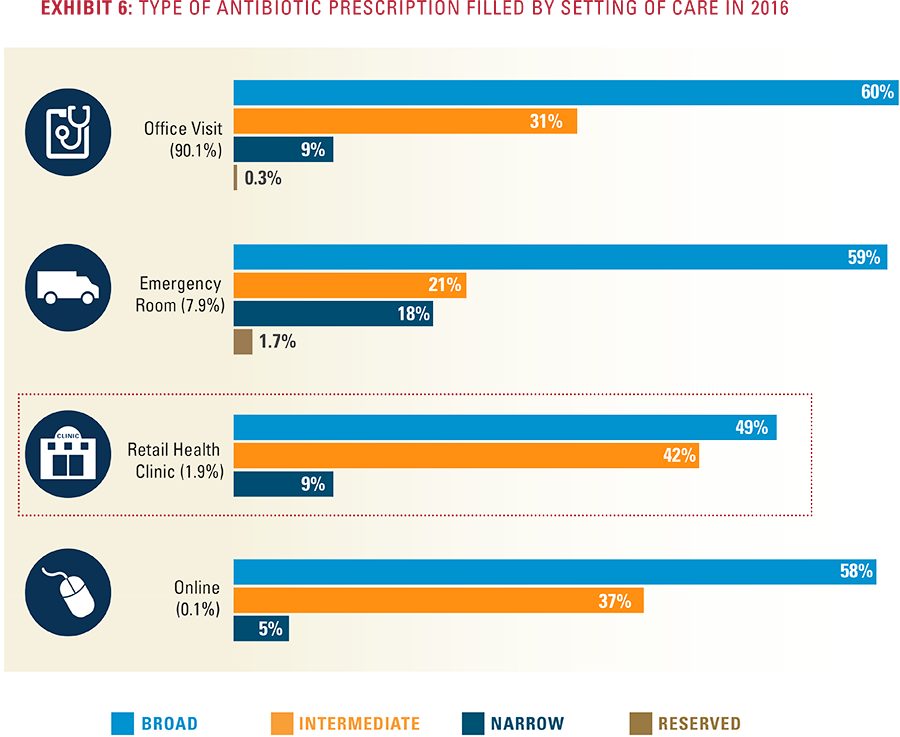 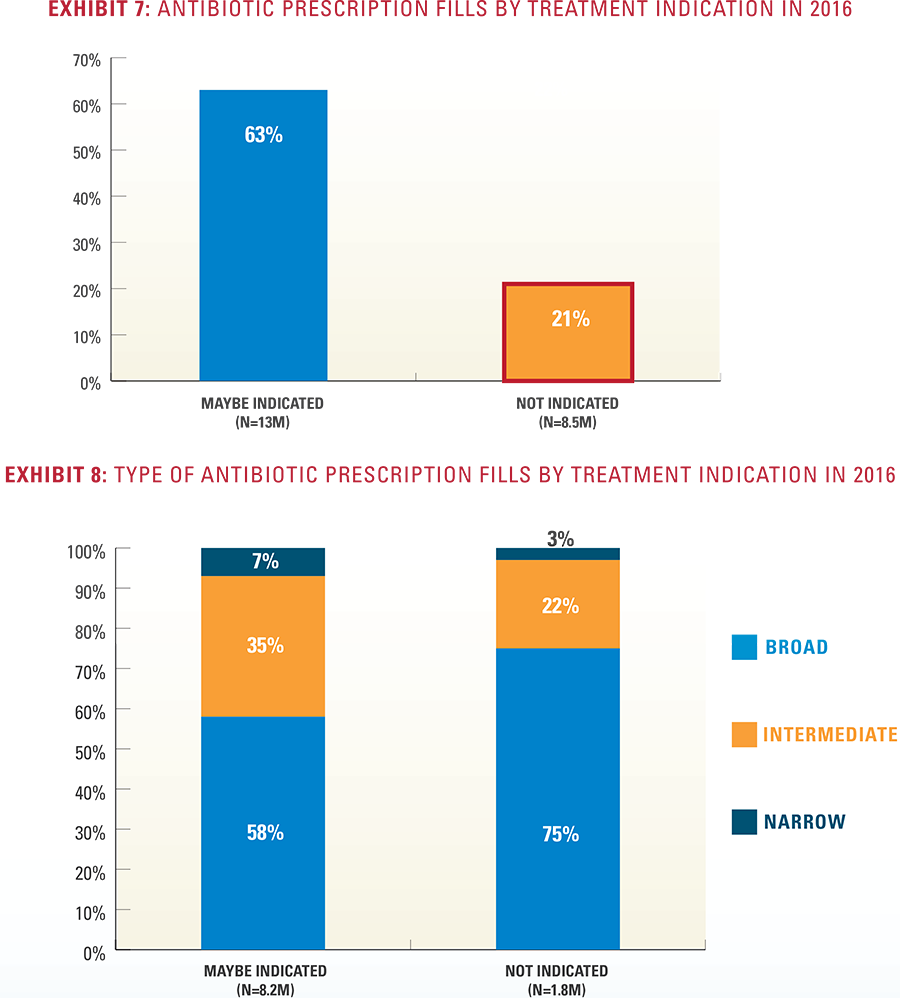 Public health efforts to increase the awareness of excessive antibiotic use and the threat posed by antibiotic-resistant bacteria appear to be achieving measurable results. This report, sponsored by the Blue Cross Blue Shield Association in partnership with HealthCore and Blue Health Intelligence, demonstrates that antibiotic prescriptions filled among commercially insured people in the United States are declining. Moreover, this decline is largely due to the reduction in the fill rate of broad-spectrum antibiotics—the type most likely to contribute to the creation of resistant bacteria. However, the data also show large regional variation in the prescribing of antibiotics and continued high use for conditions where antibiotics have limited effectiveness, indicating there are further improvements to be made.

This is the fifteenth study of the Blue Cross Blue Shield: The Health of America Report series, a collaboration between Blue Cross Blue Shield Association and Blue Health Intelligence, which uses a market-leading claims database to uncover key trends and insights into healthcare affordability and access to care. Analysis was performed by and also includes medical claims data from HealthCore, a wholly owned and independently operated health outcomes subsidiary of Anthem, Inc.

The report examines the medical and pharmacy claims of more than 31 million Blue Cross Blue Shield commercially insured members per year (non-Medicare) from 2010 through 2016. This study aims to determine how antibiotic prescription rates have changed during the study period, with breakouts by four different types of antibiotics, age, gender and geography. To measure accuracy of antibiotic prescribing, this study includes a selection of conditions for which antibiotics are denoted “maybe indicated” and “not indicated” as a treatment for a specific condition. All conditions were added together to create each of the two categories of “maybe indicated” and “not indicated,” and the total percentages of these categories were calculated by weighting the number of visits with each condition.

For more information and to read past reports from The Health of America Report Series, visit www.bcbs.com/healthofamerica. 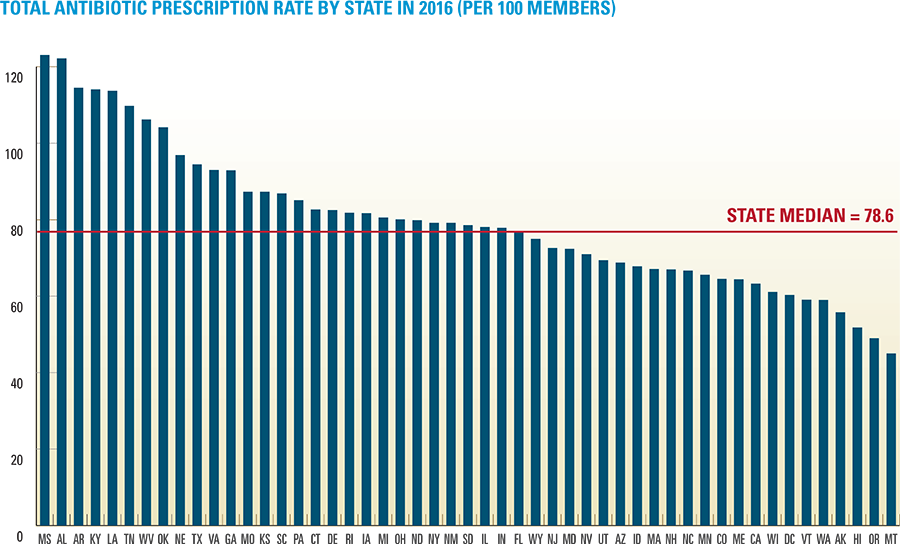 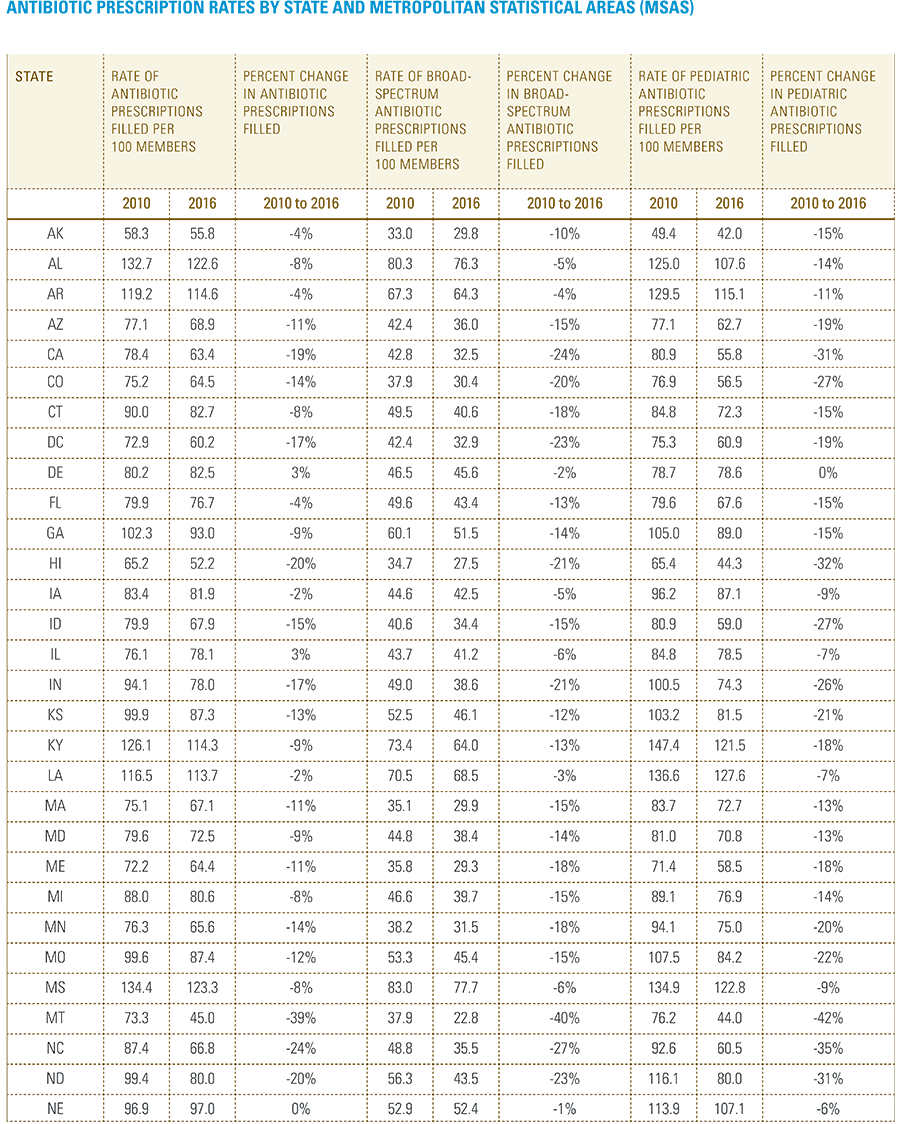 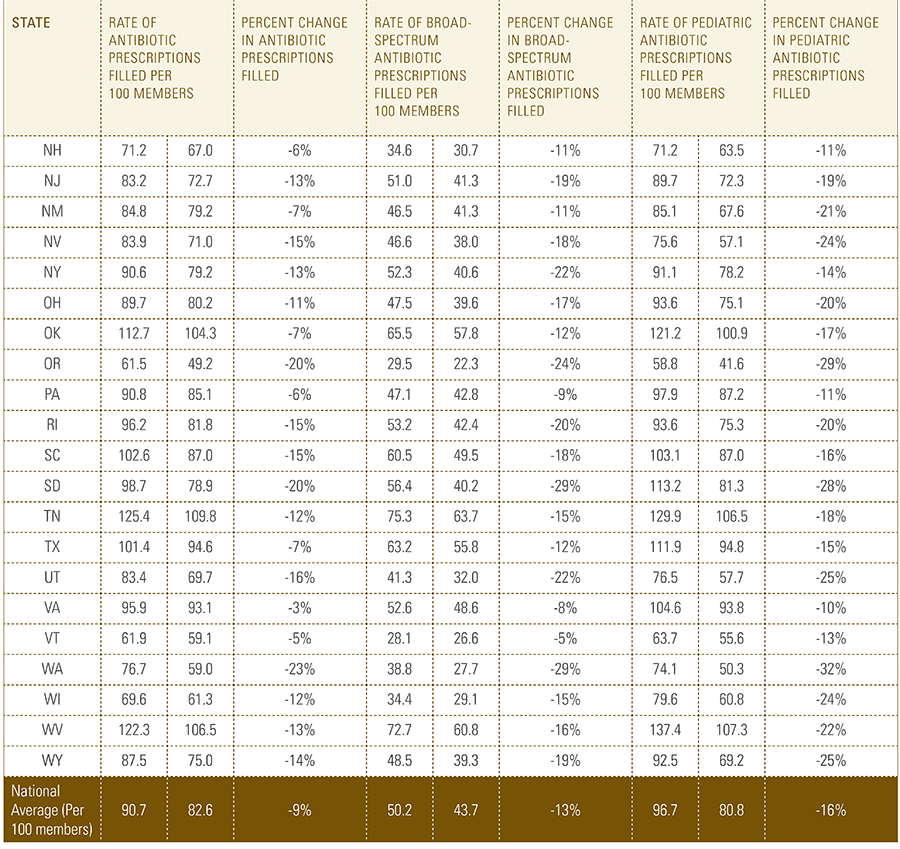 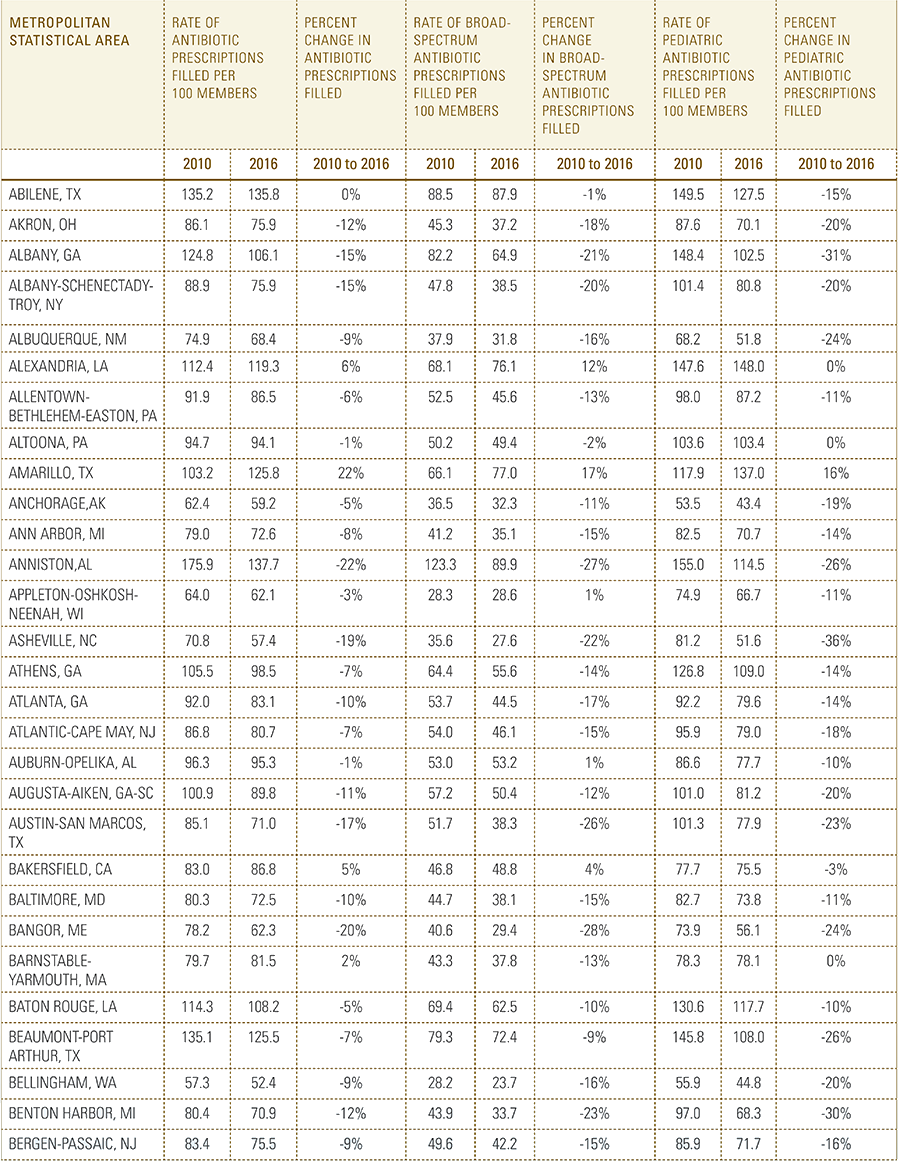 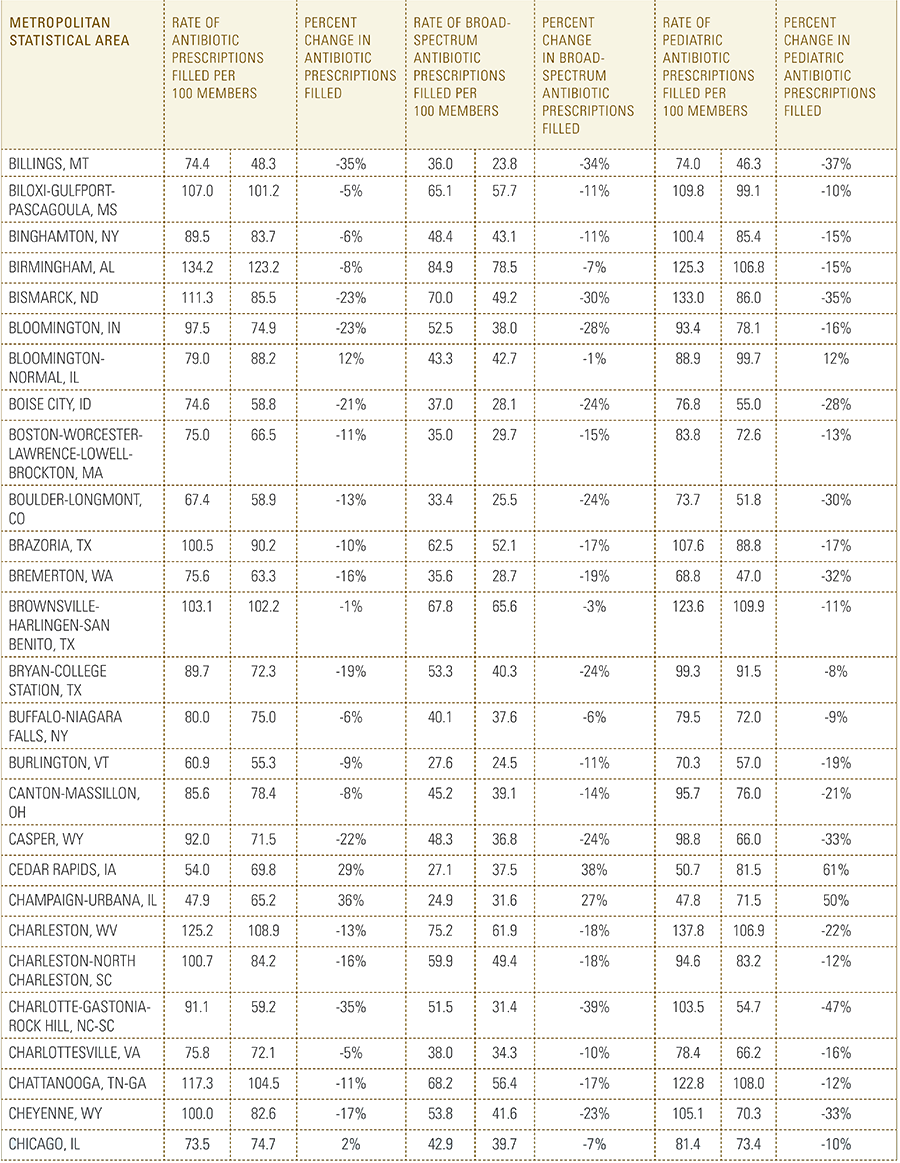 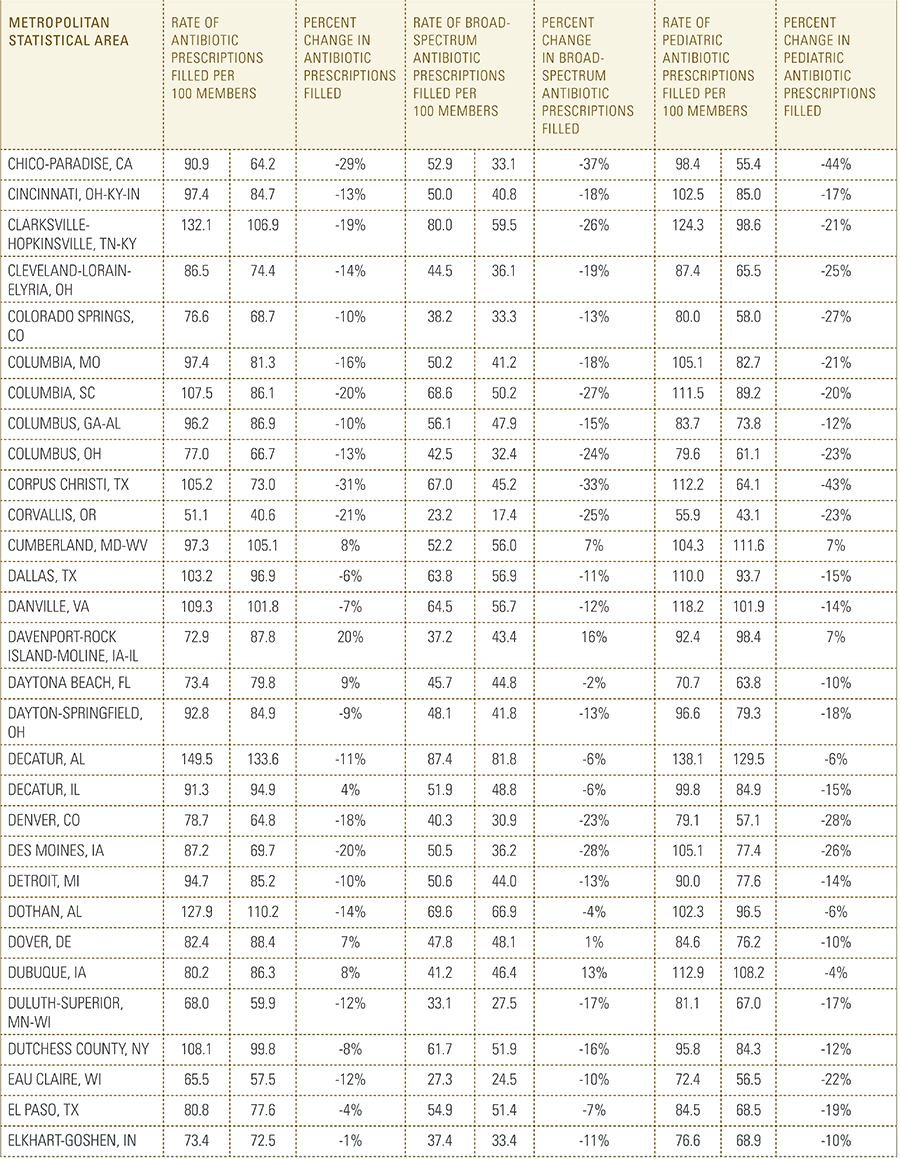 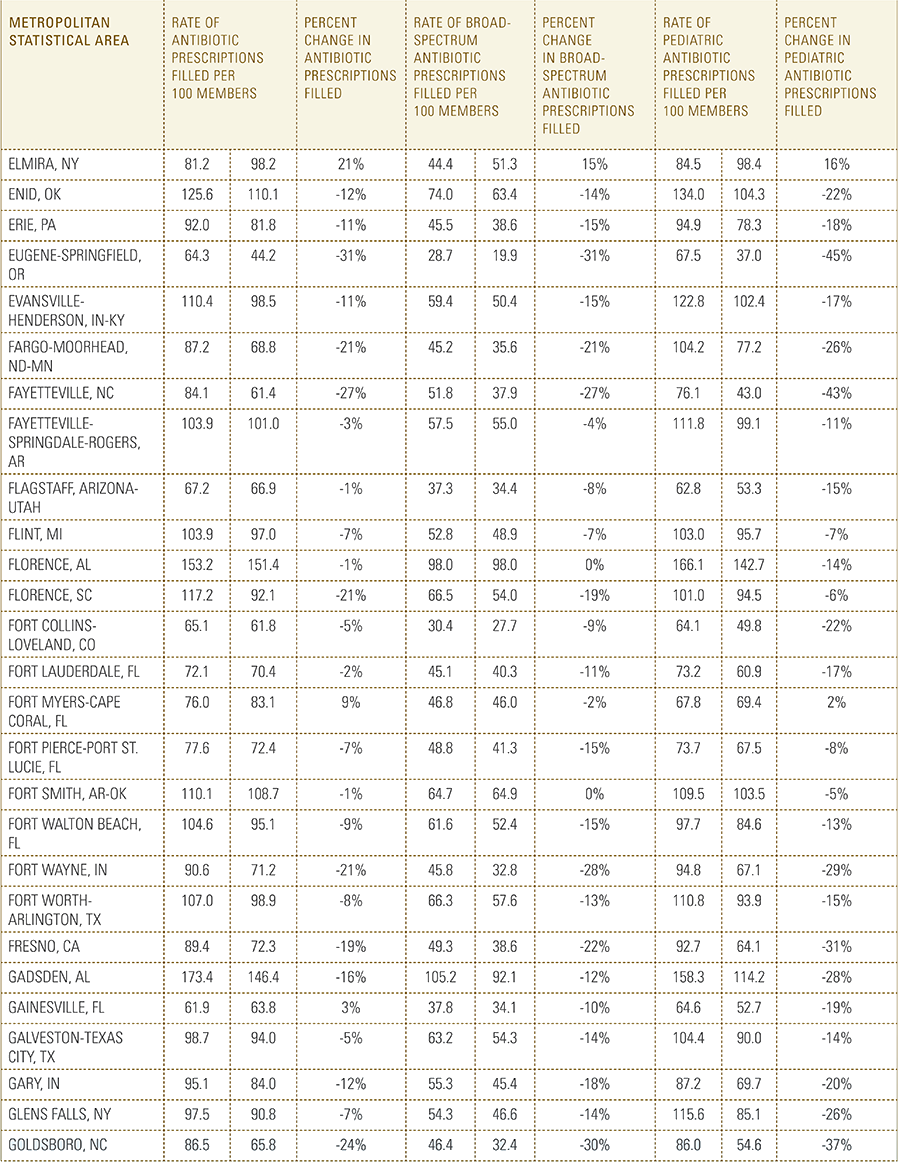 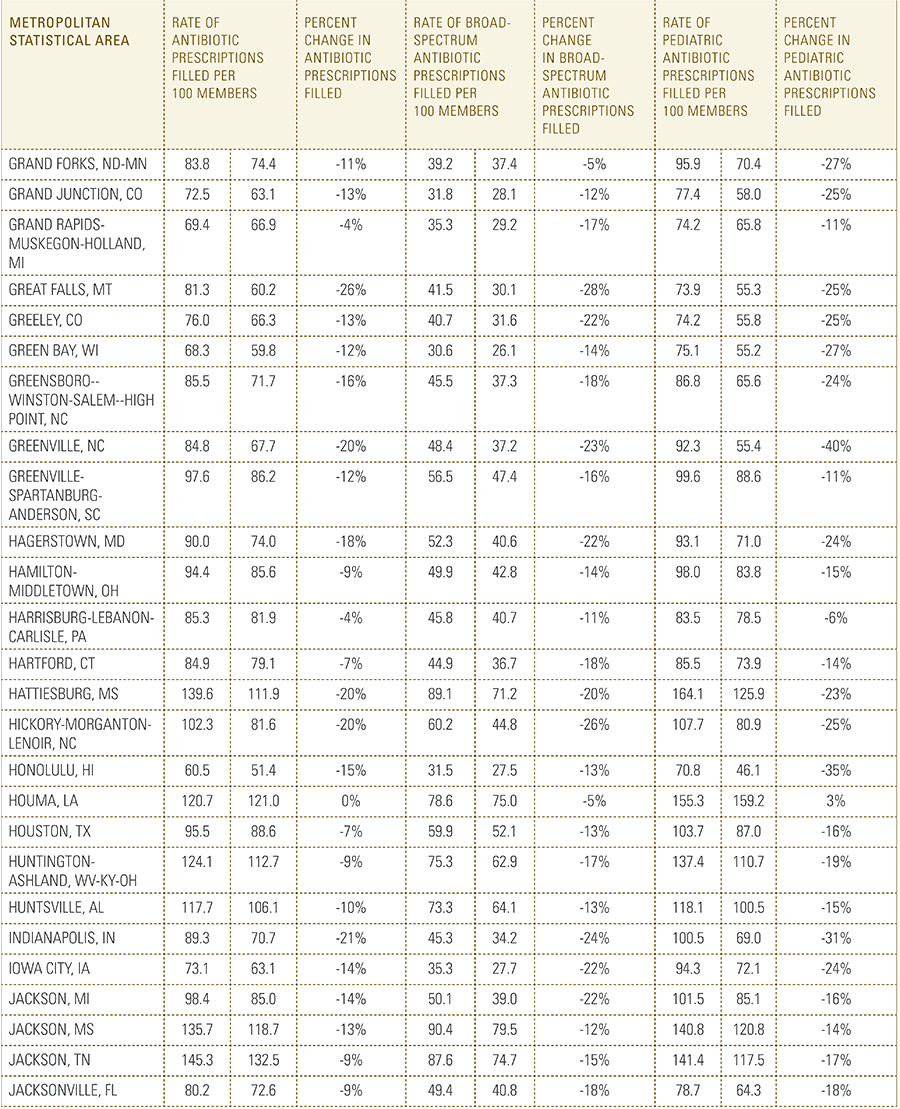 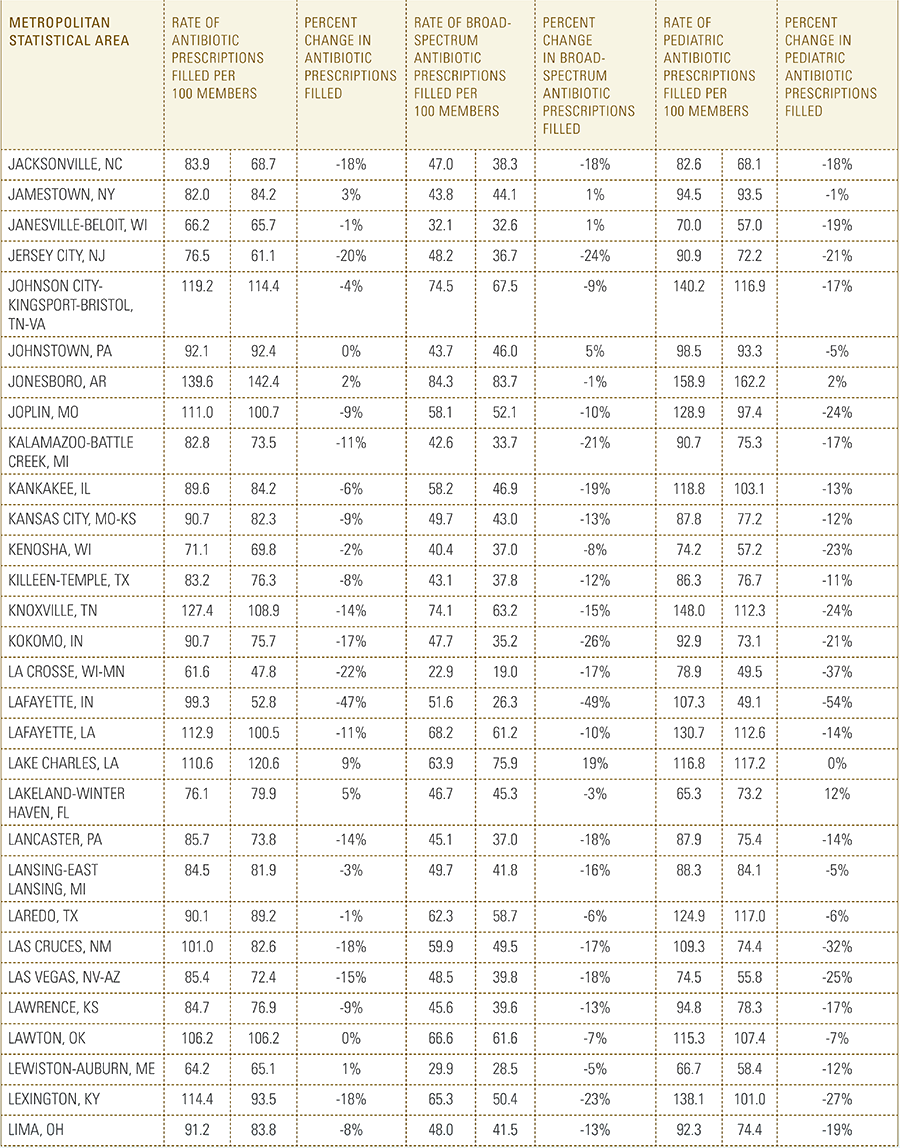 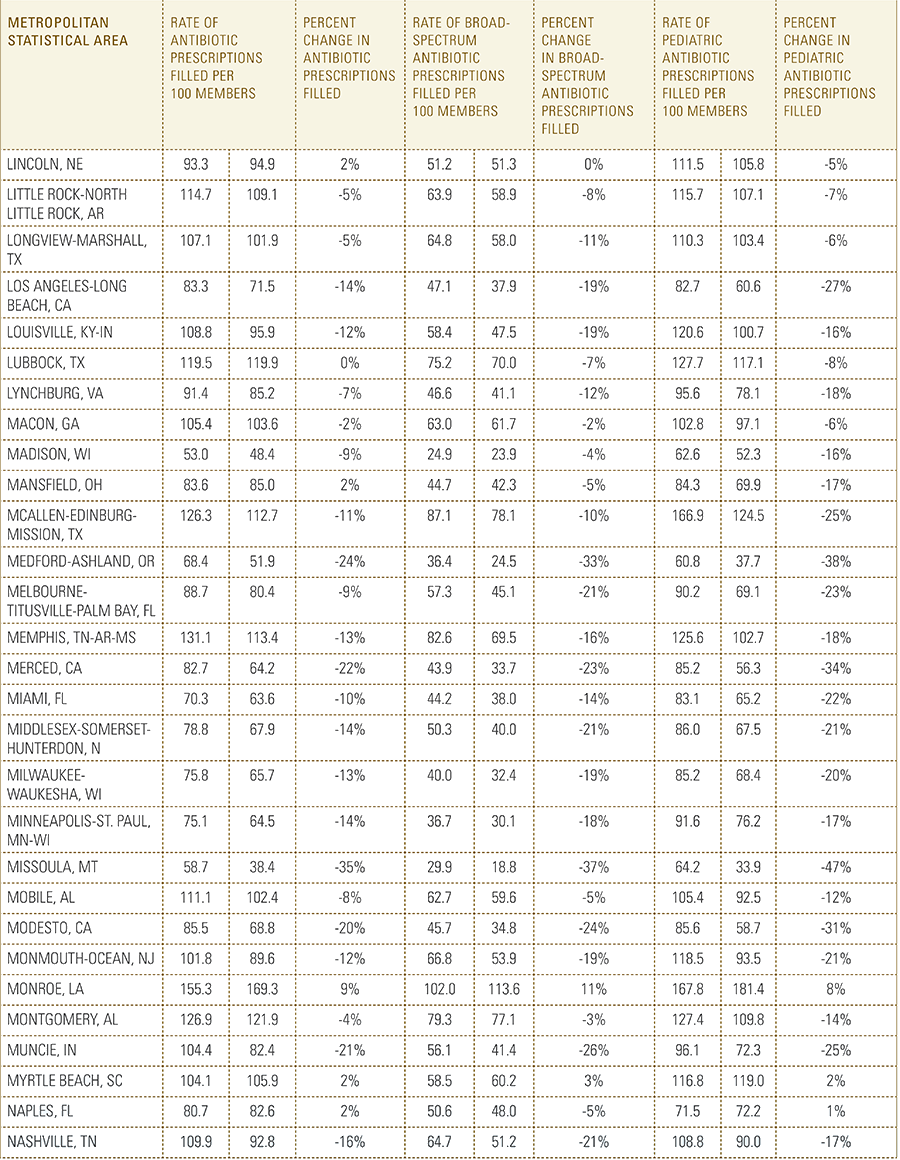 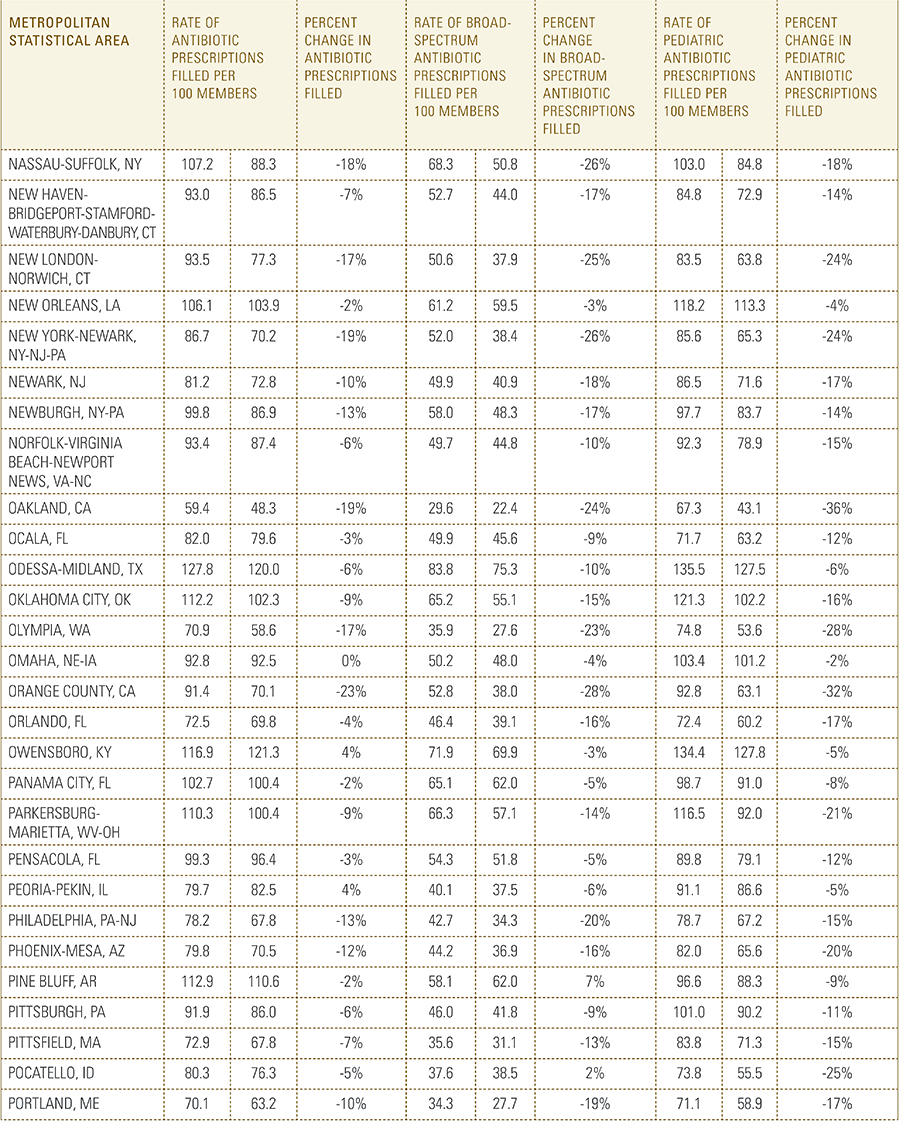 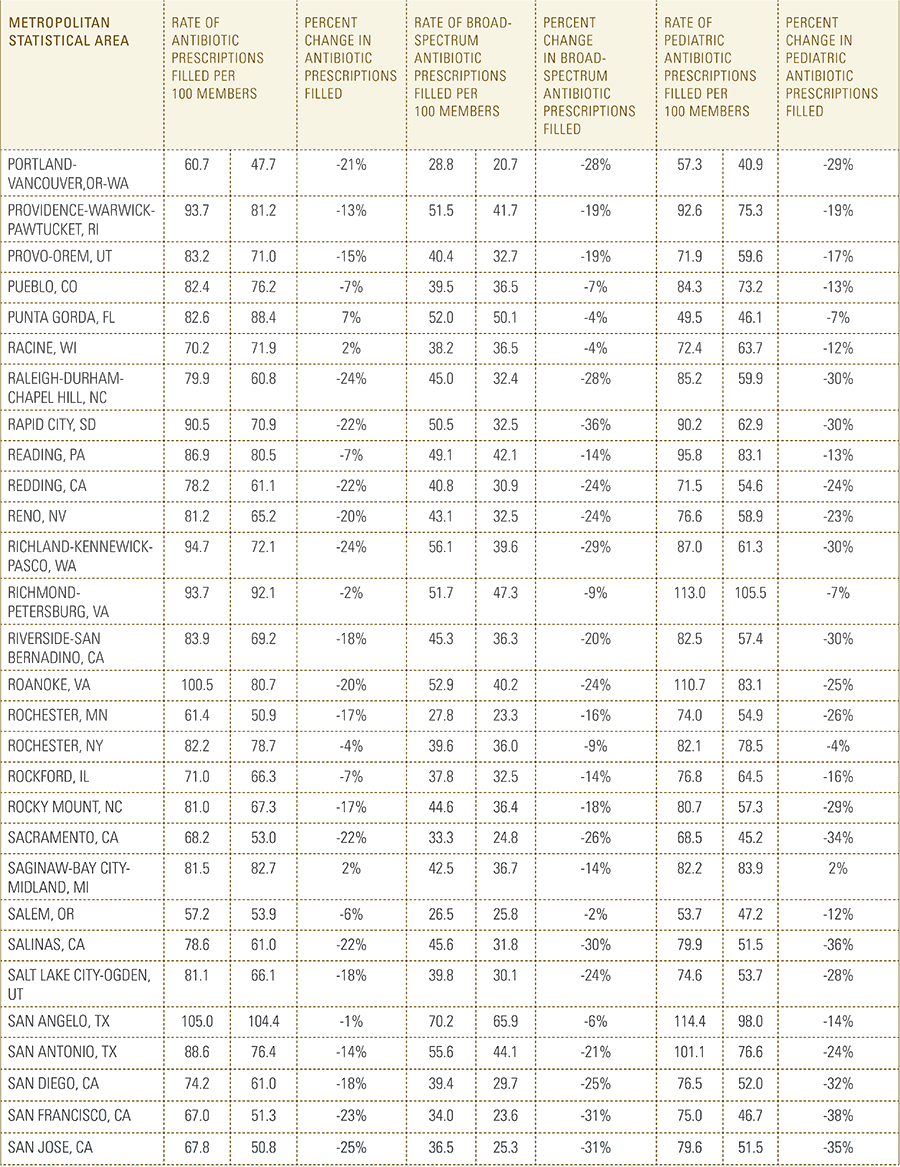 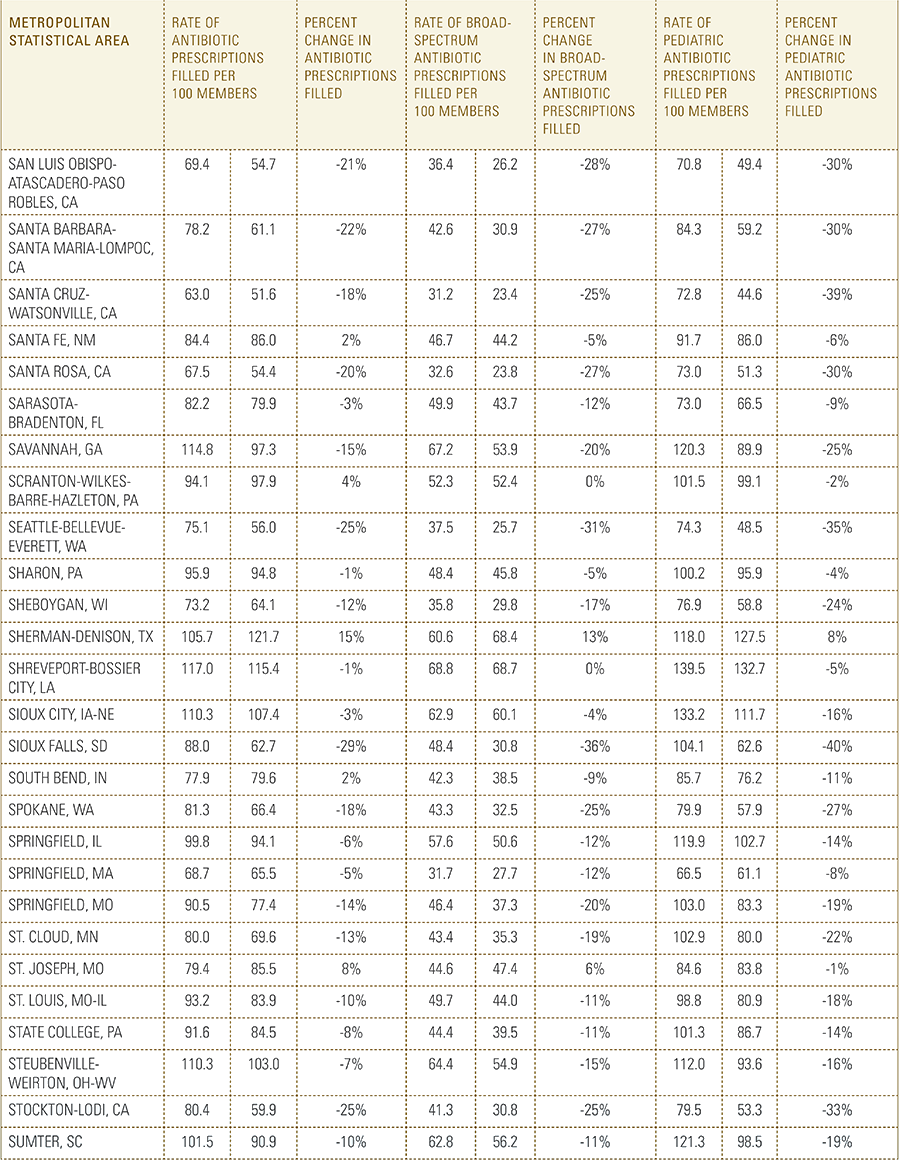 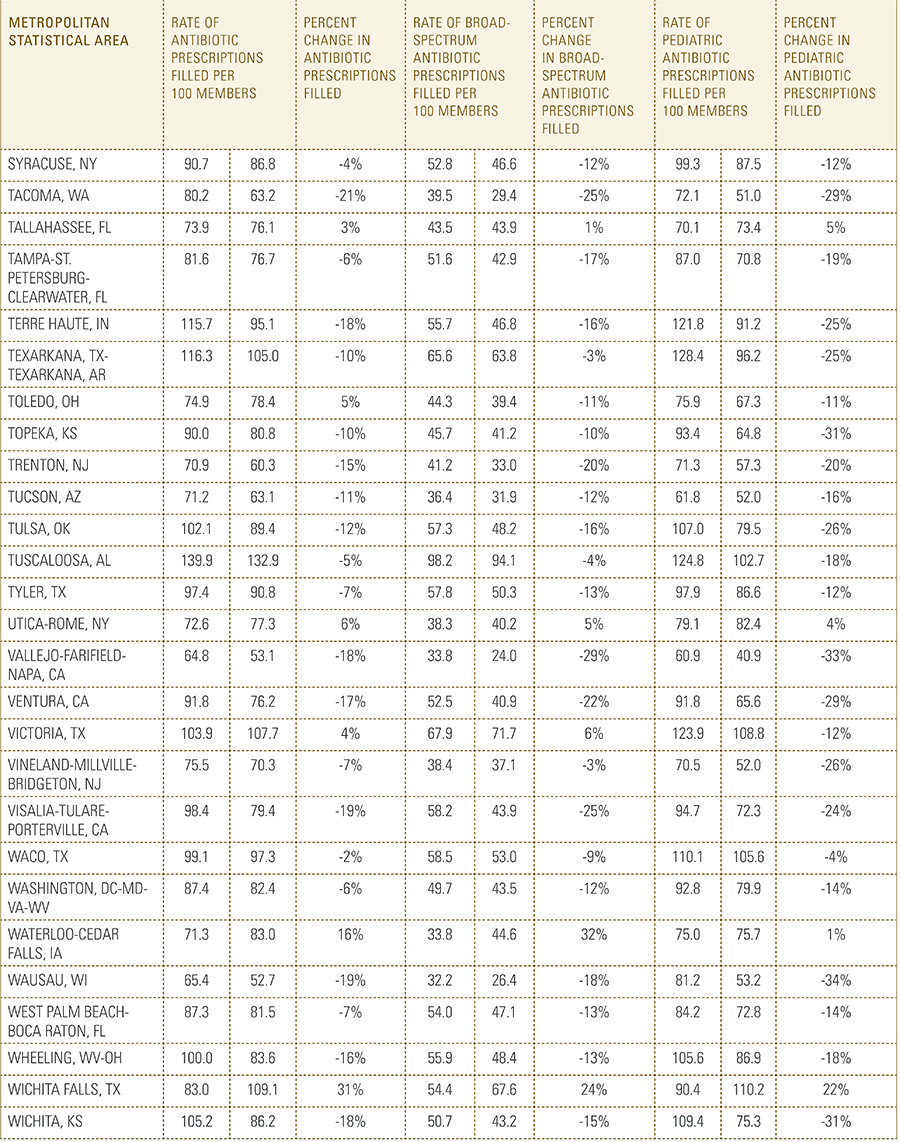 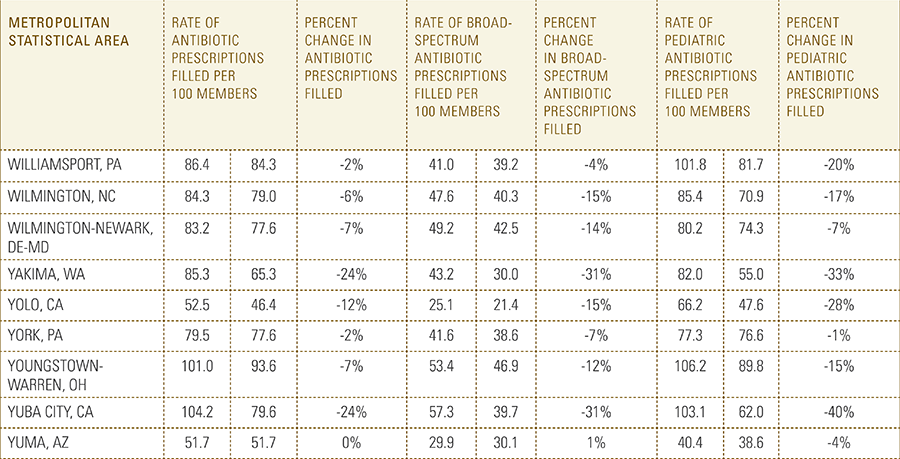