Diabetes is one of the diseases that most significantly impacts the health of America as reflected by nearly every national metric. Among the over 200 conditions measured by the BCBS Health Index, diabetes is third in terms of its health impact nationally on quality of life, and third in terms of per member cost for the commercially insured population. Its impact on health is even greater when considering common comorbid conditions such as hypertension (present in 93% of diabetics), high cholesterol (81%), obesity (55%) and others.1

The BCBS Health Index is a unique measurement of America’s health that quantifies how a range of diseases and conditions impact longevity and quality of life.* The BCBS Health Index leverages 1.8 billion claims for over 40 million commercially insured Americans under 65, excluding Medicare and Medicaid. The “health impact” of a specific condition (such as diabetes) is the degree to which it reduces optimal health. The Health Index reflects prevalence and severity for that condition as well as the years of life lost due to disability and risk of premature death.

*For more information, see Appendix A.

II. The Health Impact of Diabetes 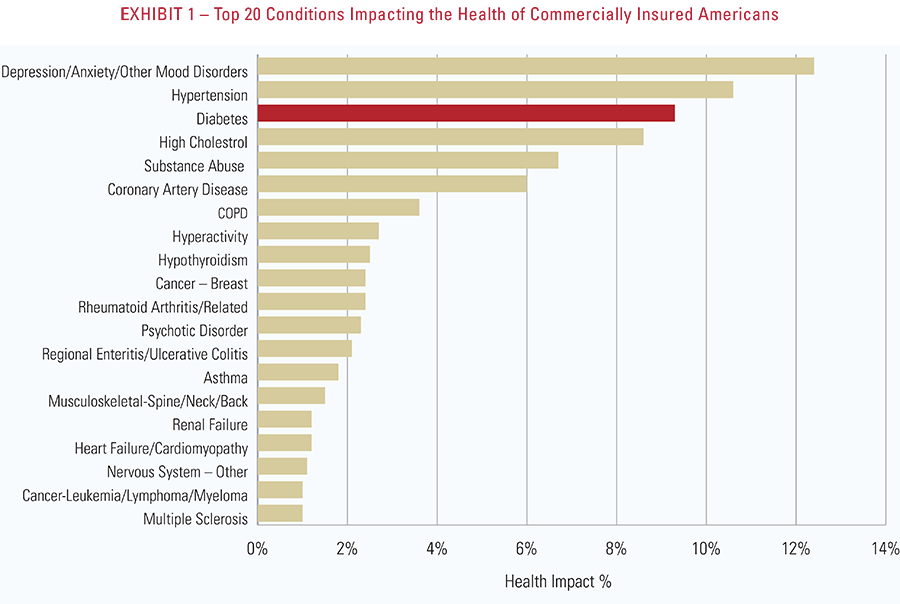 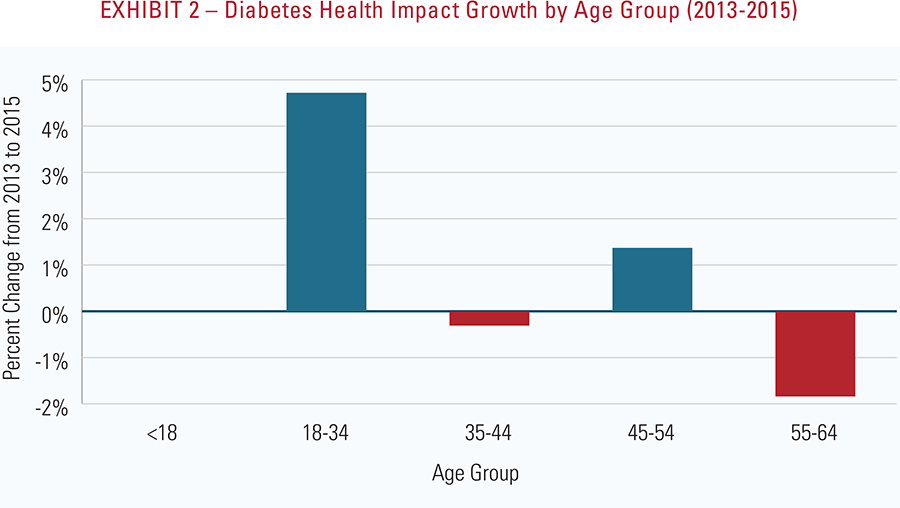 One reason for this increase in the 18-34 age group has been the growing rates of obesity among adolescents, a common risk factor associated with the onset of diabetes. According to the CDC, rates of teenage obesity have risen over 30% from 2001 to 2015.4 Moreover, recent growth rates of obesity among the youngest adults (18-24) suggest that this growth can be expected to continue for the 18-34 age cohort going forward (see Exhibit 3). 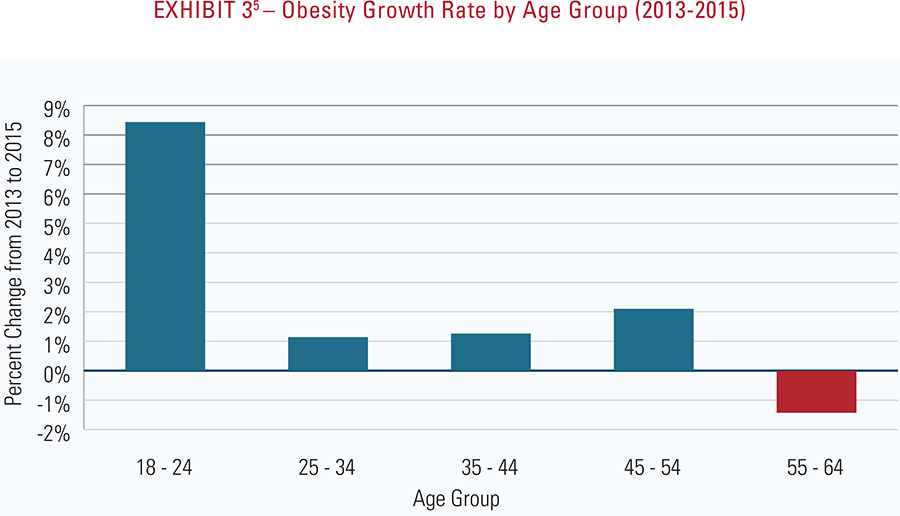 Examining results by region reinforces the link between the growing impact of diabetes among young adults and young adult obesity. For the age cohort 18-34, the regions where diabetes has the highest impact tend to be the regions with the highest rates of obesity (see Exhibit 4). 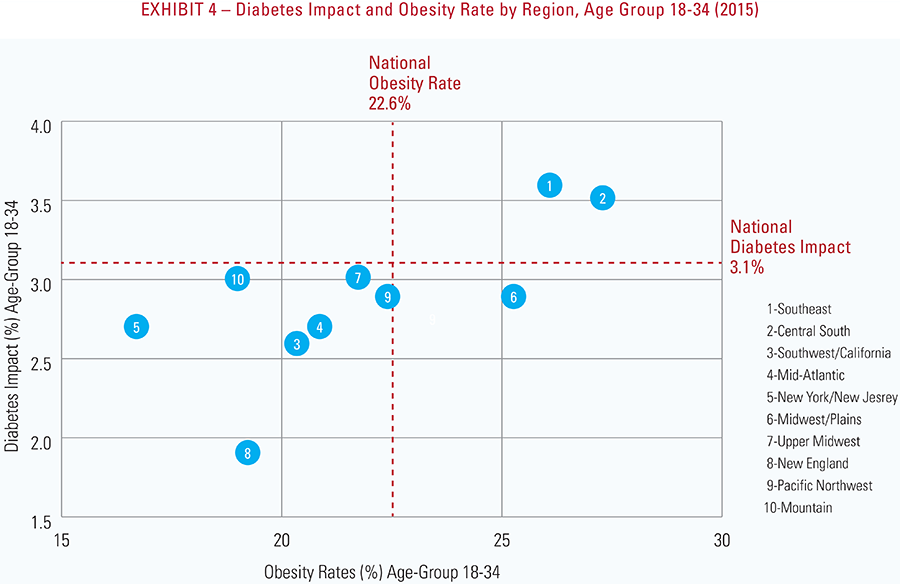 While diabetes contributes to 9.3% of health impact in the commercially insured population nationally, the range of its impact varies across regions of the country (see Exhibit 5). For purposes of this analysis, the report focuses on 10 regions as defined by the Department of Health Human Services (see Appendix B). 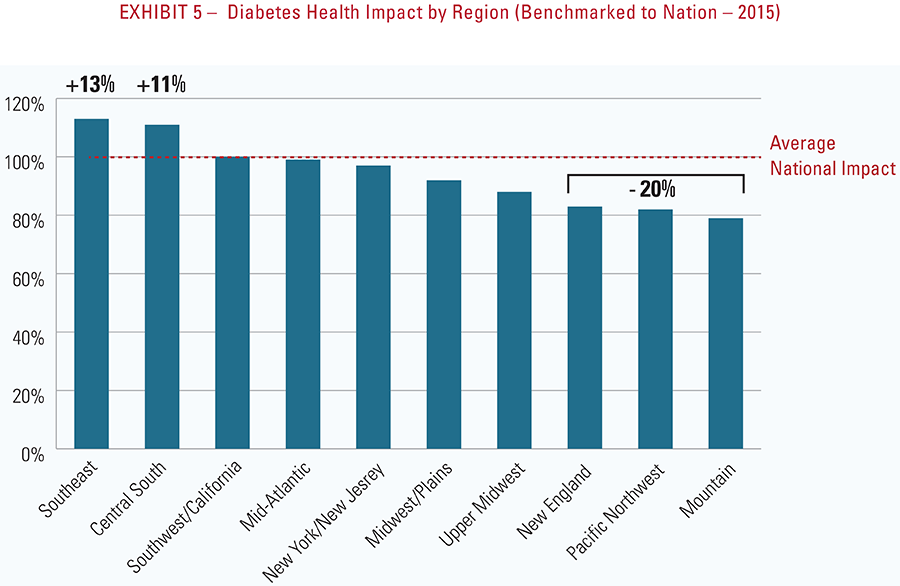 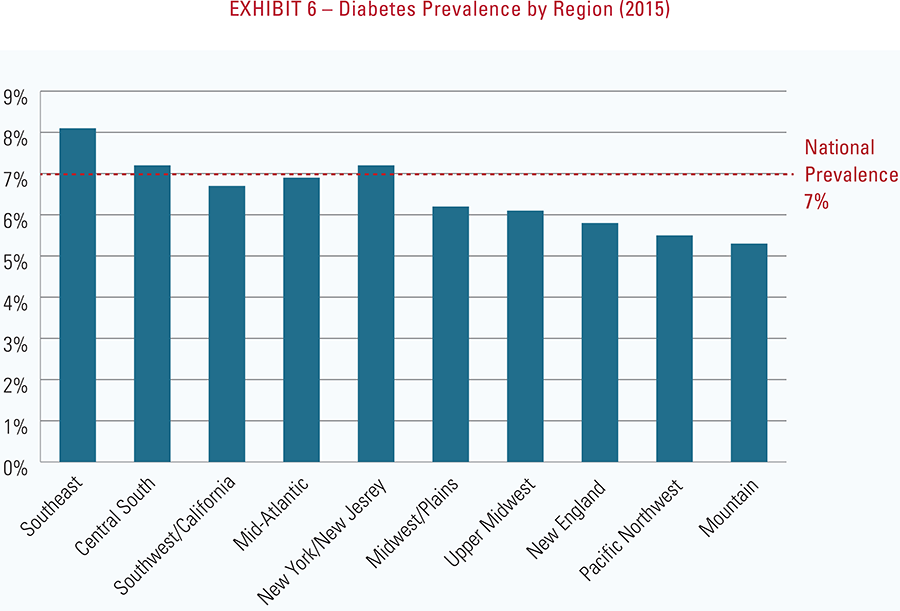 The cost of diabetes also varies markedly by region and only aligns somewhat with the health impact of the condition (see Exhibit 7). The two southern regions are highest on cost, consistent with the high level of diabetes impact in those regions. The New York/New Jersey, Midwest and Mountain regions all have somewhat higher than expected costs given their level of condition impact. In contrast, the Southwest/ California region has lower than expected costs.7 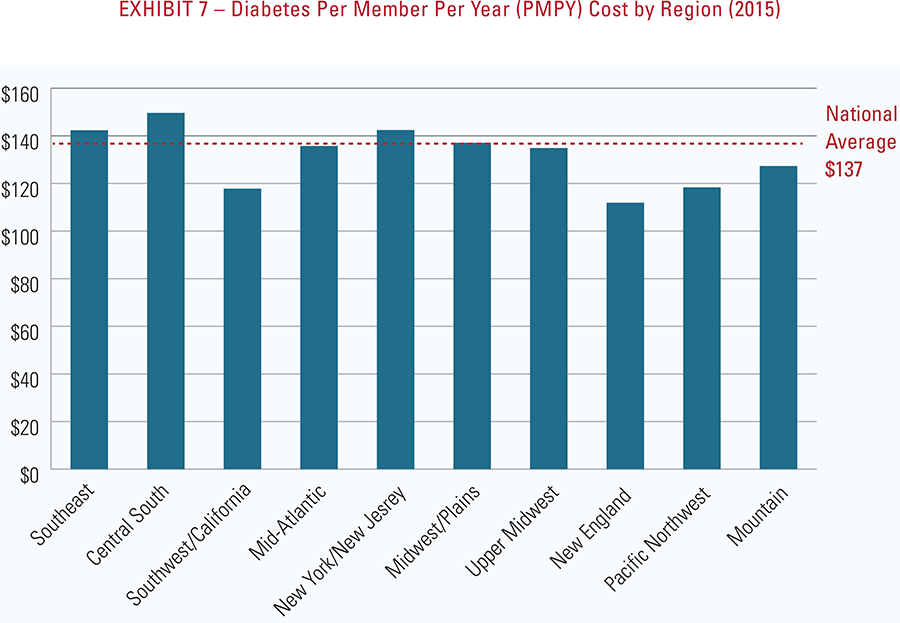 The BCBS health index analysis of diabetes in the commercially insured population highlights significant variability in the condition’s health impact across the country. It also reveals how an increase in the rate of obesity in young adults is presenting challenges for lowering the impact of diabetes in America in the future.

Blue Cross Blue Shield is continuing its partnership with Moody’s Analytics to measure how variation in social and environmental factors across counties in the U.S. contributes to the health impact of diabetes and other conditions on community health. This research will address reasons for the variations in the impact of conditions like diabetes that were presented in this report. It will also offer more insights to policy makers, local community leaders, and health advocates as they prioritize action steps to address conditions affecting Americans’ health and well-being.

Appendix A: The BCBS Health Index

Blue Cross Blue Shield companies are committed to improving health in America through data-driven insights. Leveraging our unmatched database of medical claims from over 40 million members, the BCBS Health Index adds a new voice to the discussion of America’s most serious health problems. The BCBS Health Index incorporates a comprehensive set of more than 200 health condition categories and quantifies how each condition affects Americans’ health, life expectancy and well-being. Focusing on claims and other healthcare data as opposed to aggregated government statistics, the BCBS Health Index provides valuable insights that support national and local discussions about how to improve America’s health.

How the BCBS Health Index Works

Using blinded claims data from more than 40 million commercially insured BCBS members, ICD-9 diagnoses were mapped to over 200 health condition categories. The impact of each condition was determined based on the years lost due to the risk of premature death and the disabling effects of illness or disease. These years of life lost were subtracted from the optimum life expectancy (OLE). The actual life expectancy is then divided by OLE to get an estimate of health between 0 and 1. These individual-level estimates are then aggregated to create a health score for the population of interest.

The formal calculation is:

Where “OLE” is a person’s optimum life expectancy derived from an actuarial life table, “mortality” is years of life lost due to risk of premature death as determined by the Center for Disease Control (CDC), and “disability” is years of living with a disability based on the Institute for Health Metrics and Evaluation’s (IHME) disability weights. 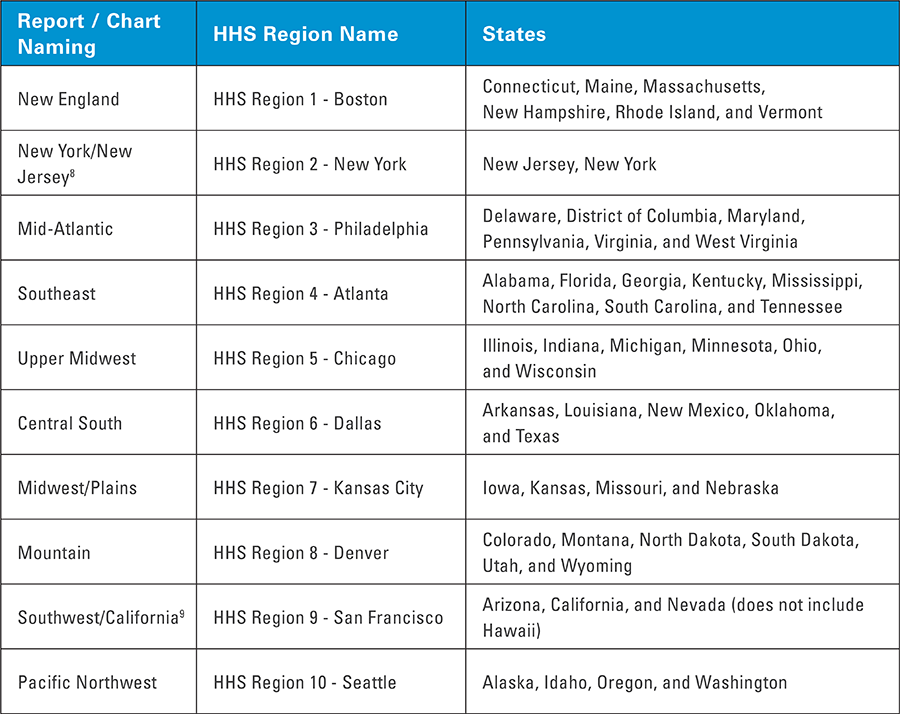 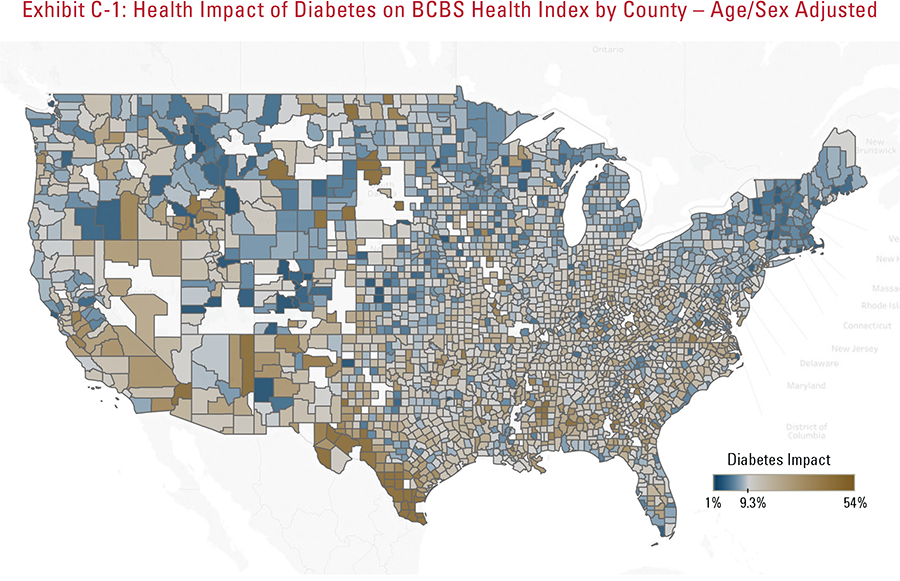 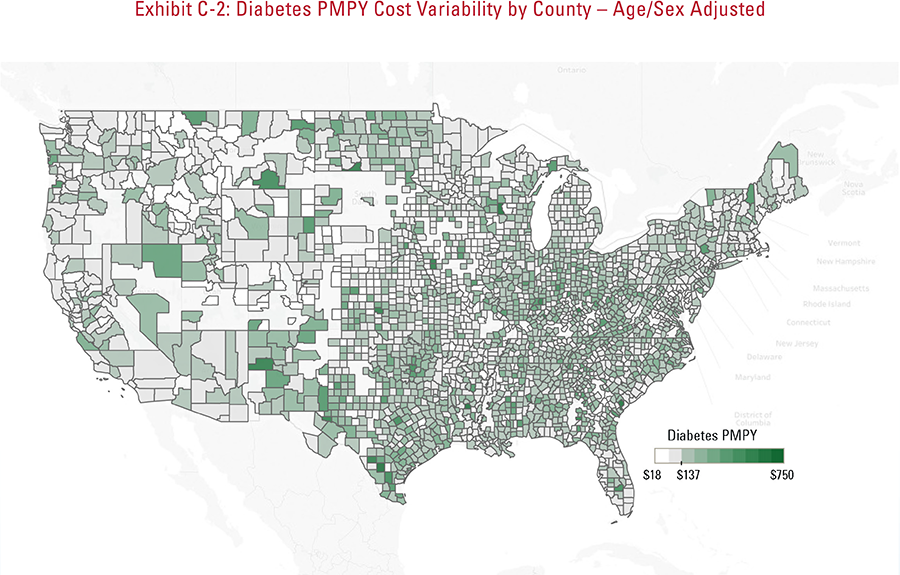 In Puerto Rico, a personal connection to improve diabetes

For millions of Americans, diabetes is an unexpected and life-altering diagnosis. This is true for Siani, a college student...
Share
Read
Featured Topics
Affordability(73)
Opioids(31)
Palliative Care(5)