As healthcare moves towards personalized or precision medicine, the differences between women and men should play an increasingly important role in diagnosis and treatment. To explore the potential impact of these differences in healthcare, this report analyzed medical claims from Blue Cross and Blue Shield (BCBS) members to compare heart attack rates and treatment patterns between women and men in the United States. The results show that women are receiving less aggressive treatments after a heart attack than men. This pattern emerges even as a greater percentage of women than men die or become disabled due to heart attacks.1

BCBS data reveals that heart attacks occur more frequently in men than women, a finding that is consistent with statistics reported by the Centers for Disease Control and Prevention. However, the American Heart Association reports that while heart disease and heart attacks are more prevalent in men, women who experience heart attacks have worse outcomes — they are more likely than men to die within one year of a heart attack, to have another heart attack within six years, and to be disabled because of heart failure within six years. In fact, heart disease far surpasses breast cancer and other recognized causes of death among U.S. women.2

Heart attacks place a significant physical and economic toll on Americans. They are the deadliest type of heart condition, accounting for nearly 40 percent of coronary heart disease-related deaths each year. Nearly 1.2 million heart attacks occur annually, 700,000 of which are for the first time. The calculated economic burden of heart disease is $133 billion in the United States.3 Heart attacks rank among the five most expensive conditions seen during inpatient hospitalizations in the U.S., accounting for total costs of over $11.5 billion and 612,000 hospital stays.4

This report intends to raise awareness of women’s heart health by analyzing BCBS data to show the following:

This analysis is based on 2014 claims data from independent BCBS companies’, focusing on people ages 18 through 64.5 The data set contains more than 43 million BCBS commercially insured members (excludes Medicare and Medicaid).

This is the third edition of “Blue Cross Blue Shield, The Health of America Report,” a collaboration between the Blue Cross Blue Shield Association and Blue Health Intelligence, which uses a market-leading claims database to uncover key trends and insights into healthcare affordability and access to care.

The BCBS data shows that in the U.S. in 2014, 0.73 out of every 1,000 women experienced a heart attack compared with 1.95 per 1,000 men; but those rates vary considerably across the country. Heart attack rates for both women and men are generally higher in the East, Midwest and Southeast regions of the country (e.g., Delaware, Maryland, Pennsylvania, Tennessee, Indiana, Louisiana, West Virginia, Kentucky and Ohio) and are generally lower in the West and Northwest regions (e.g., California, Colorado, Montana, Oregon and South Dakota). With few exceptions, geographic differences are similar for women and men. However, there are five states — Oklahoma, Louisiana, Maryland, Florida and Mississippi — that rank among the top 25 percent for heart attack rates among women but not for men. (A table reporting heart attack rates for women and men for all states can be found in the appendix.) 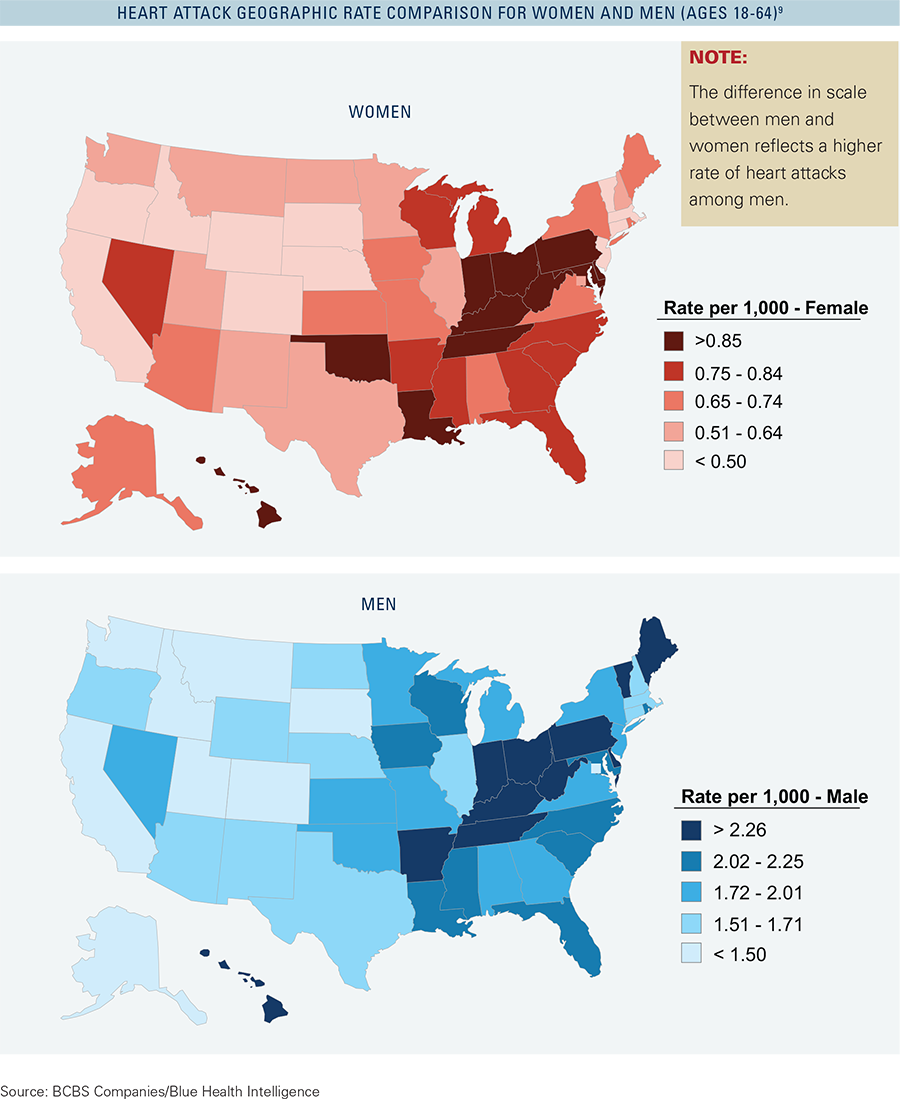 Studies show that even modest changes to diet and lifestyle can improve heart health and lower the risk of heart attack by as much as 80 percent.10 A comparison of three preventable risk factors in states with low versus high heart attack rates, for both men and women, shows that those states with high heart attack rates also tend to exceed the national average rates for at least two of the following three risk factors: physical inactivity, obesity and smoking. 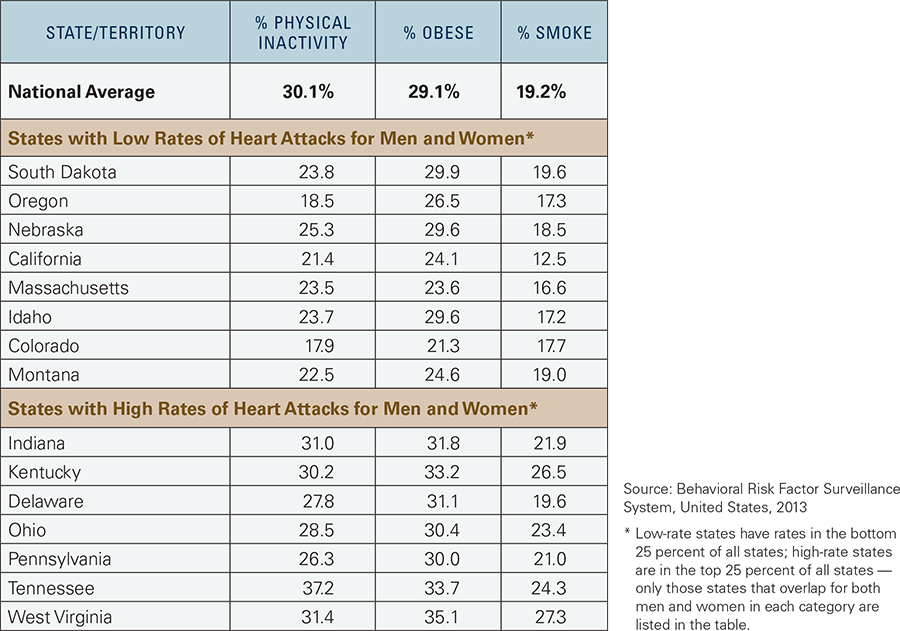 While important progress has been achieved in bringing attention to the impact of heart disease on women, the findings in this report reflect the actual healthcare experience of thousands of women and reveal the need to further inform and empower women to take control and understand the risks and symptoms of heart disease.

Organizations committed to improving women’s heart health have been instrumental in bringing attention to this issue. In recognition of the variation of heart attack rates and the power of community-based interventions to help make modest lifestyle changes, the Women’s Heart Alliance advocates for improvement in the cardiovascular health of women in high-risk geographies by encouraging women to talk to their healthcare providers. They also are encouraging the medical community to proactively address the screenings, to evaluate diagnostic and therapeutic differences, and to talk to patients and peers about women’s heart health.13

Differences between men and women can also be found in symptoms and prevention, as well as in the types of treatment delivered. Efforts to improve understanding of heart disease and stroke in women and to increase the development of therapies for finding and addressing cardiovascular disease and its risk factors in women will spark a new impetus for understanding differences between women and men in heart disease.

The findings from this report highlight the need for additional examination of treatment patterns and social determinants of heart health at the local and national level among men and women and suggest several areas for follow-up:

Collectively, interested stakeholders and collaborators can raise awareness in an effective manner that leads to better health outcomes. As advocates increase and intensify their efforts to increase funding for women’s heart research and to ensure women’s full representation in biomedical studies, researchers and practitioners will better understand the underlying causes of differences between women and men. The result will be a healthier generation of American women. 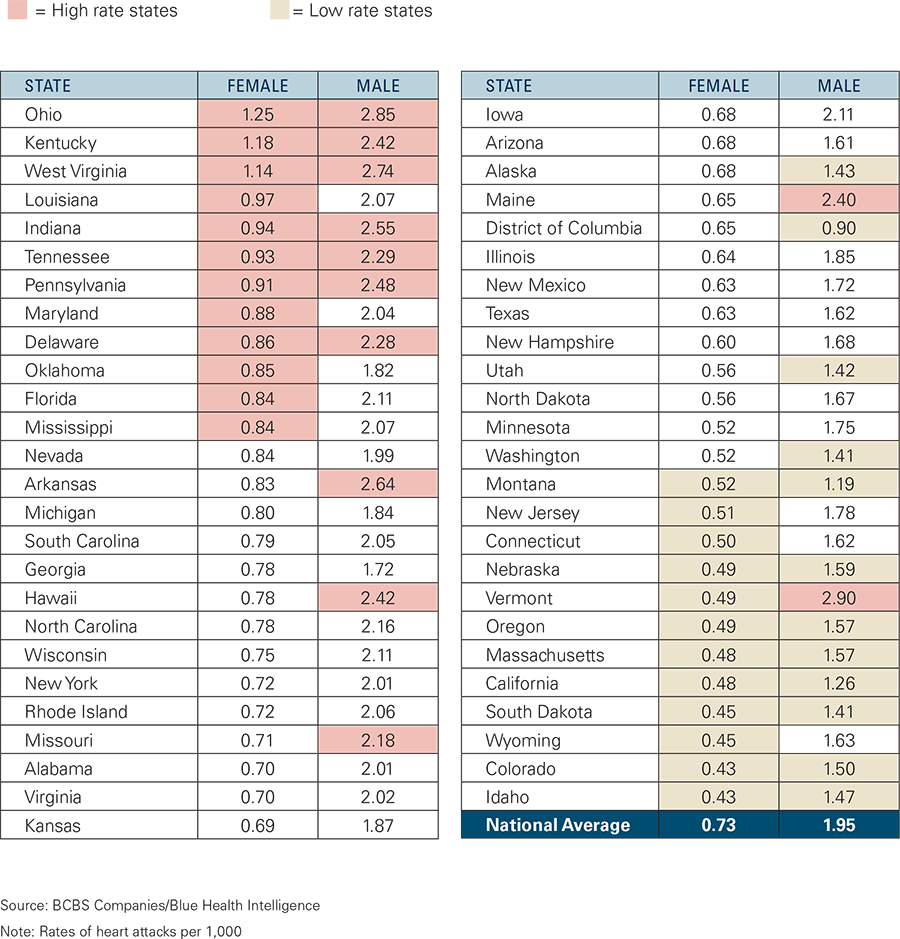 The patient-centered medical home concept continues to expand across the country as providers demonstrate that improving quality of care can simultaneously drive overall costs down for patients.
Share
Read
Article

BCBS Kansas is working to improve access to mental health care through a statewide awareness campaign, as well as an initiative to make sure the patient is matched with the appropriate provider.
Share
Read
Featured Topics
Affordability(65)
Opioids(31)
Palliative Care(5)