Attention deficit hyperactivity disorder (ADHD) is the second most impactful condition affecting children’s health in the U.S. It accounts for 16 percent of the impact all health conditions have on Generation Z (0-19 years old) as measured by the Blue Cross Blue Shield (BCBS) Health Index.SM, 1 Children diagnosed with ADHD struggle with paying attention, controlling impulses and being overly active.2

In 2017, about 2.4 million commercially insured American children were diagnosed with ADHD, climbing more than 30 percent over the past eight years.3 ADHD is most prevalent among middle school-aged children (11-13 years old), and boys are diagnosed about twice as much as girls. With ADHD diagnosis on the rise, it is crucial to better understand the impact of this condition on the health of American children. 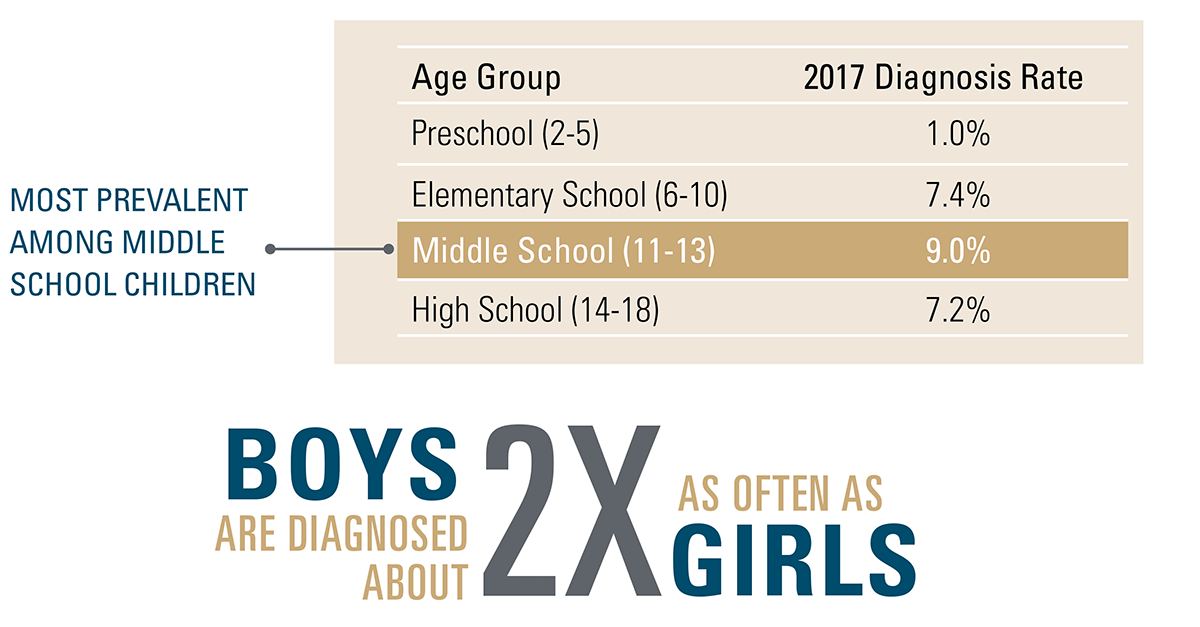 ADHD diagnosis rates are higher in the south and lower in the west, with a nearly three-fold difference between the rates of the highest and lowest states. 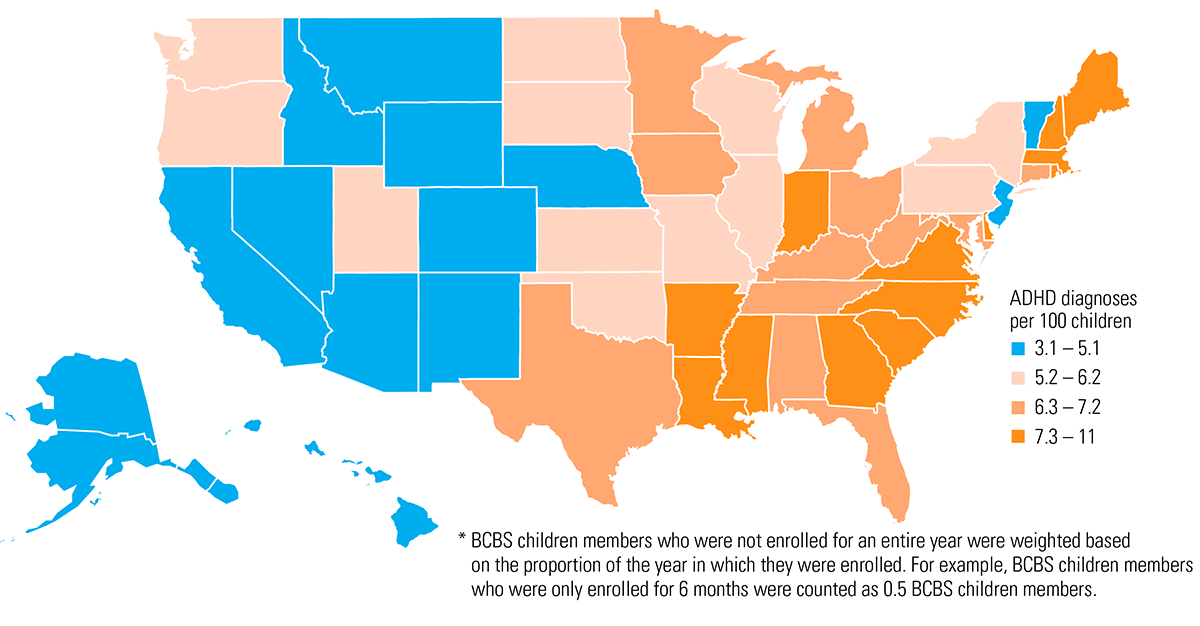 3. Children with ADHD Likely to have other Behavioral Health Conditions

Though declining, nearly half of children with ADHD were treated with only medication in 2017. The American Academy of Pediatrics (AAP) recommends both behavioral therapy and medication, preferably together, as ADHD treatment options for children 6 years old and up.4

The southern region of the U.S. has a significantly larger portion of children treated with only medication.

ADHD is one of the most common behavioral health conditions affecting children in the United States. Over the past eight years, ADHD diagnoses continued to increase, especially impacting middle school-aged boys. While 4 in 10 children with ADHD also have at least one other behavioral health disorder, treatment patterns for ADHD vary widely across the U.S. These ADHD trends indicate a need to continue focusing on the diagnosis and treatment for a growing number of American children.

This is the 25th study of the Blue Cross Blue Shield, The Health of America Report® series, a collaboration between Blue Cross Blue Shield Association and Blue Health Intelligence (BHI), which uses a market-leading claims database to uncover key trends and insights in healthcare affordability and access to care. Analysis was performed by and also includes administrative claims data from HealthCore, a wholly owned and independently operated health outcomes subsidiary of Anthem, Inc. This report focuses on the diagnosis and treatment of ADHD among commercially insured American children 2-18 years old from 2010-2017. The study population was identified by utilizing ADHD diagnosis codes in BCBS medical claims.

Racial Disparities in Diagnosis and Treatment of Major Depression

Mental health is a foundational part of overall wellness - one that informs our sleep, immune system, relationships, physical health, ability to work and overall quality of life. Yet more than 70% of all U.S. counties have a shortage of mental health workers.
Share
Read
Featured Topics
Affordability(62)
Opioids(31)
Palliative Care(5)