Parkinson’s disease is a long-term degenerative brain disorder characterized by a progressive decline of motor and other physical functions. A common sign is a muscular tremor when at rest, frequently affecting fingers, thumbs, hands or chin.1 The majority of those affected with Parkinson’s disease will develop additional health problems including cognitive changes, depression, loss of smell, constipation and sleep disorders. These symptoms sometimes occur years before the disease is diagnosed.2

In 2017, approximately 90,000 commercially insured adults between the ages of 30 and 64 were diagnosed with Parkinson’s disease. While that number is relatively small, our research shows that the prevalence rate has grown more than 50% in the span of five years.

This report examines this troubling trend, including who is being diagnosed with Parkinson’s disease, the impact it has on their health and how they’re treating it. With the majority of Parkinson’s patients being cared for by family members, it is important to understand the impact of this disease and its rise in younger Americans on both those afflicted and their caregivers.

1. The prevalence rate of Parkinson's Disease has grown more than 50% in the span of five years.

2. The average age of a Parkinson's diagnosis in the commercially insured population(30-64) is 57 years old—with those diagnosed under the age of 50 classified as early-onset.3

4. More than 82% of Parkinson's patients use a symptom relieving drug to treat the disease.

Parkinson’s diagnoses are on the rise

In 2017, approximately 90,000 commercially insured adults between the ages of 30 and 64 were diagnosed with Parkinson’s disease. While that number is relatively small, our research shows that the prevalence rate has grown more than 50% in the span of five years. 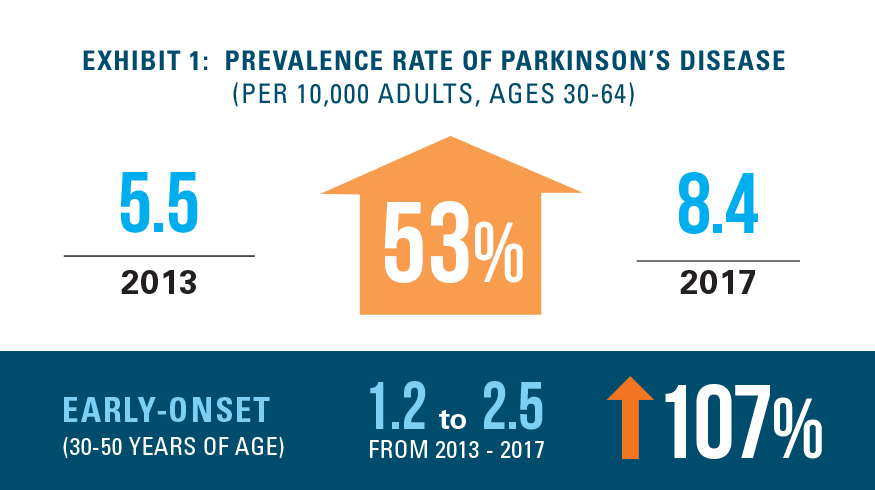 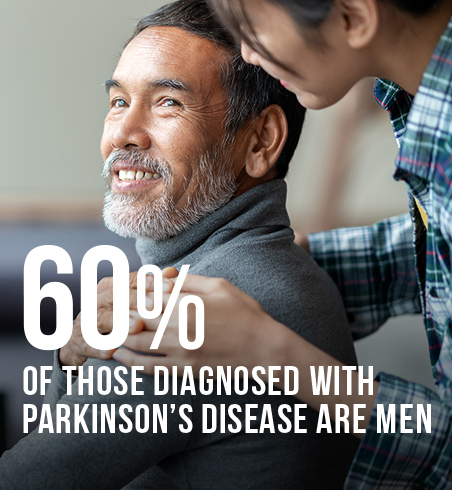 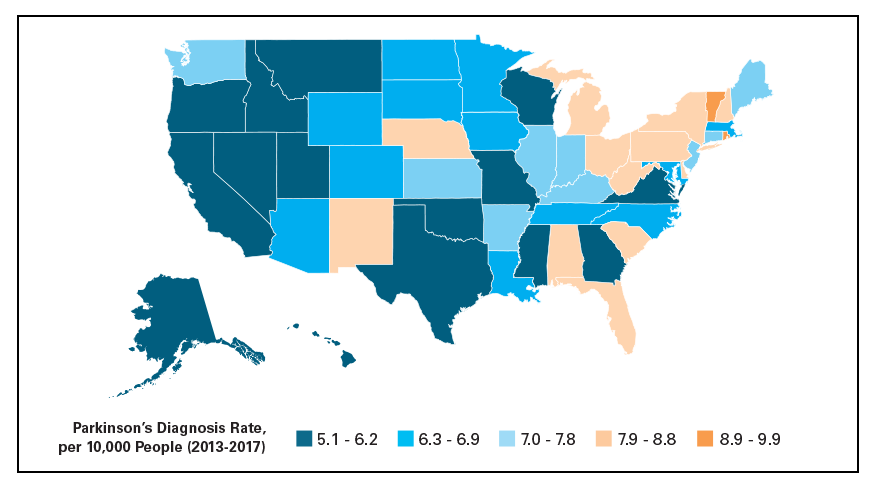 Wellmark Blue Cross and Blue Shield advocates for employer support to address the growing number of Parkinson’s diagnoses in the workplace. Read more

The impact of Parkinson’s disease on overall health

Based on the Blue Cross Blue Shield (BCBS) Health Index, the overall health of those affected by Parkinson’s is significantly lower than the general population. In 2017, the average BCBS Health Index for someone aged 30-64 with Parkinson’s was 57, compared to 88 for the entire commercially insured population in this age range. This translates to an average of 10.7 years of healthy life lost for those with the condition compared to 3.4 years for the 30-64 population as a whole.4 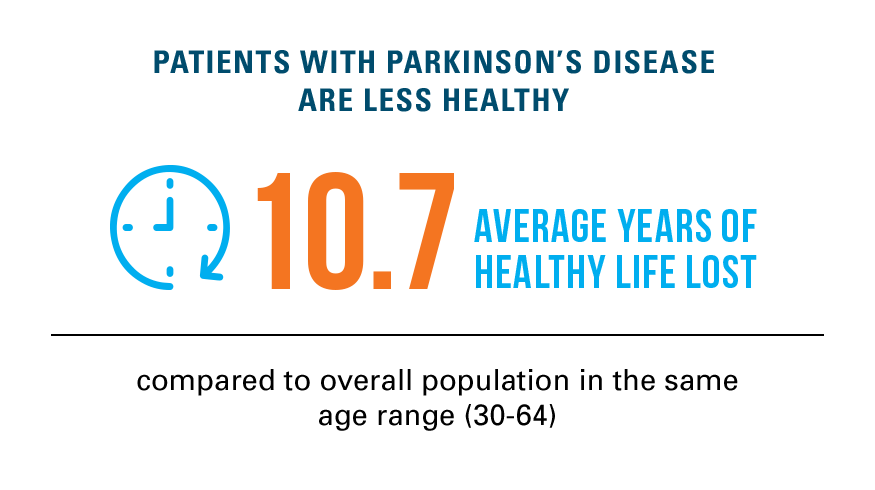 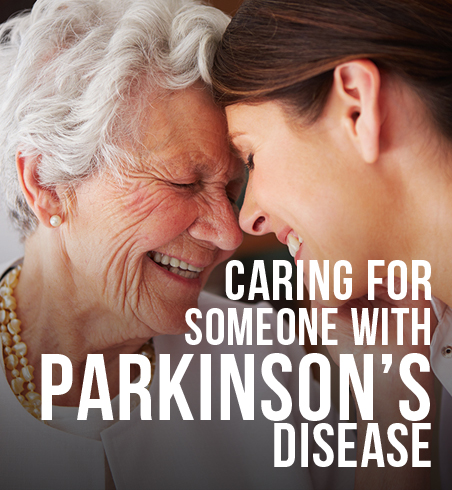 Caring for someone with Parkinson’s Disease

The majority of Parkinson’s patients are cared for by informal caregivers, such as a family member. The physical, mental and emotional work this requires can be significant. The Impact of Caregiving on Mental and Physical Health found that caregivers have 26% poorer health compared to a benchmark population, as measured by the BCBS Health Index. In addition, a national survey conducted by the Blue Cross Blue Shield Association found that 1 in 4 unpaid caregivers are feeling more stress trying to balance work and family due to COVID-19.5

Most Parkinson’s patients use medication to manage their disease

While there is no known cure for Parkinson’s disease, 82% of patients receive a symptom-relieving drug. Because the symptoms of Parkinson’s get worse with age, only 57% of younger patients take these medications, likely because the drug side-effects are worse than the symptoms. 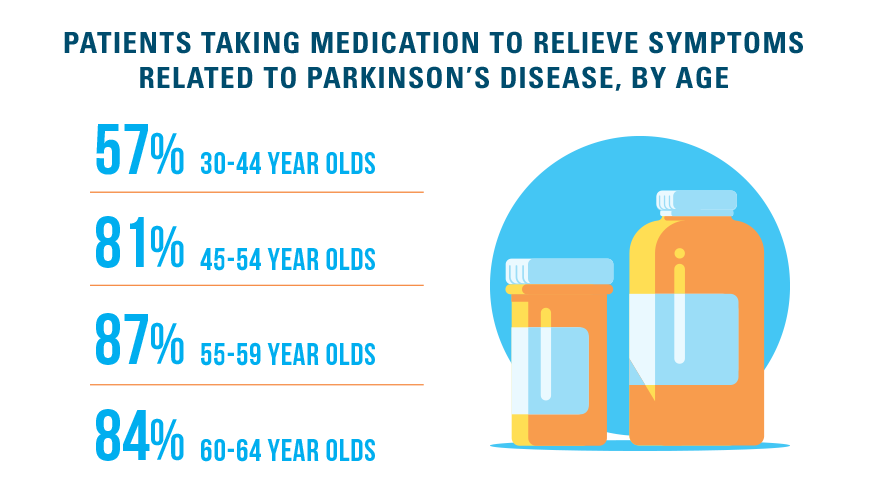 While still extremely rare, the growth in Parkinson’s disease is rising amongst members ages 30-64, and rapidly in adults under the age of 50. These people living with Parkinson’s will likely need caregiving support for an extensive period of time as they grow older. With no known cure and limited treatment options, this condition will adversely impact a growing number of Americans, either as patients or as caregivers, well into the future.

This is the 35th study of the Blue Cross Blue Shield, The Health of America Report® series, a collaboration between the Blue Cross Blue Shield Association (BCBSA) and Blue Health Intelligence® (BHI), which uses a market-leading claims database to uncover key trends and insights in healthcare affordability and access to care. Additional analysis was performed by and also includes data from The National Opinion Research Center (NORC) at the University of Chicago.

This report focuses on the diagnosis of Parkinson’s disease among commercially insured Americans 30 to 64 years of age from 2013 to 2017. Anyone who is diagnosed with Parkinson’s under the age of 50 is defined as having “young” or “early-onset” Parkinson’s. The study population was identified by utilizing diagnosis codes in BCBS medical claims of more than 48 million BCBS commercially insured members from 2013 to 2017. Prevalence rates were calculated by taking all member months of an individual post the month of diagnosis of Parkinson’s and dividing the months by the total member months in the data for each year through 2017. The derived rate of these conditions was then used to extrapolate to the entire commercially insured population between the ages of 30 and 64, based on government estimates.

The numbers in this report represent a point-in-time measurement of the prevalence of Parkinson’s disease among commercially insured American adults 30 to 64 years of age. Therefore, a portion of the growth in the prevalence of these conditions over time can be attributed to the accumulation of people who are diagnosed with the condition and remain within the commercially insured population during the study period, rather than to an increase in the rate of diagnosis year over year.

Millennials' health is declining. Can employers and health plans help?

Millennials have seen double digit increases in major depression and significant increases in substance use disorders over the...
Share
Read
Article

How tech is bridging the gap for caregivers, patients during COVID-19

Innovating to care for the caregivers: lessons from entrepreneurs, health plans and advocates

The COVID-19 pandemic and financial pressures have exacerbated stress on caregivers. But entrepreneurs and health plans are stepping up to support this unseen workforce.
Share
Read
Featured Topics
Affordability(55)
Opioids(31)
Palliative Care(5)