Move it or lose it.

Regular physical activity is shown to decrease the risk of conditions like diabetes and heart disease by 25% or more, and improve primary cardiovascular health risk factors including cholesterol, blood pressure and BMI.1,2 Yet 4 in 5 U.S. adults do not meet recommended physical activity levels, elevating healthcare costs by 11%.3,4

This report looks at the multi-year impacts of engagement in regular exercise through an employer-provided fitness benefit on health outcomes.5 This research examines 2,450 Blue Cross Blue Shield (BCBS) commercially insured members who used their benefit over a four-year period and measures changes in health outcomes, compared to non participants. Outcomes include overall health via the BCBS Health Index, chronic condition prevalence and healthcare costs.

Members who consistently exercised were 1 point healthier on average, which translates to an 8% reduction in the impact of health conditions that could lower their overall health. This impact was measured by the BCBS Health Index between years three and four of the study.6

Chronic conditions like hypertension and diabetes grew 2-3 % slower among members who regularly exercise.

The result of regular exercise was measured by performing a trended cohort analysis looking at differences in health and healthcare costs over a four-year period.

When comparing the BCBS Health Index of the program participants and the matched population, program participants who regularly use the fitness benefit saw a slower decline in their average BCBS Health Index7 (see Figure 1). In other words, BCBS members who used their fitness benefit on a regular basis did a better job of maintaining their overall health than did members without the benefit.

The cohort was established among members who maintained their fitness benefit for four years and used the benefit five or more times a month in the last two years of the study. A matched cohort of people who did not enroll in the fitness benefit was then developed based on gender, age and BCBS Health Index during the first year of the program. The overall health of the two cohorts were compared over a four year period using the BCBS Health Index.8 (See Methodology for further explanation of the matching process.) 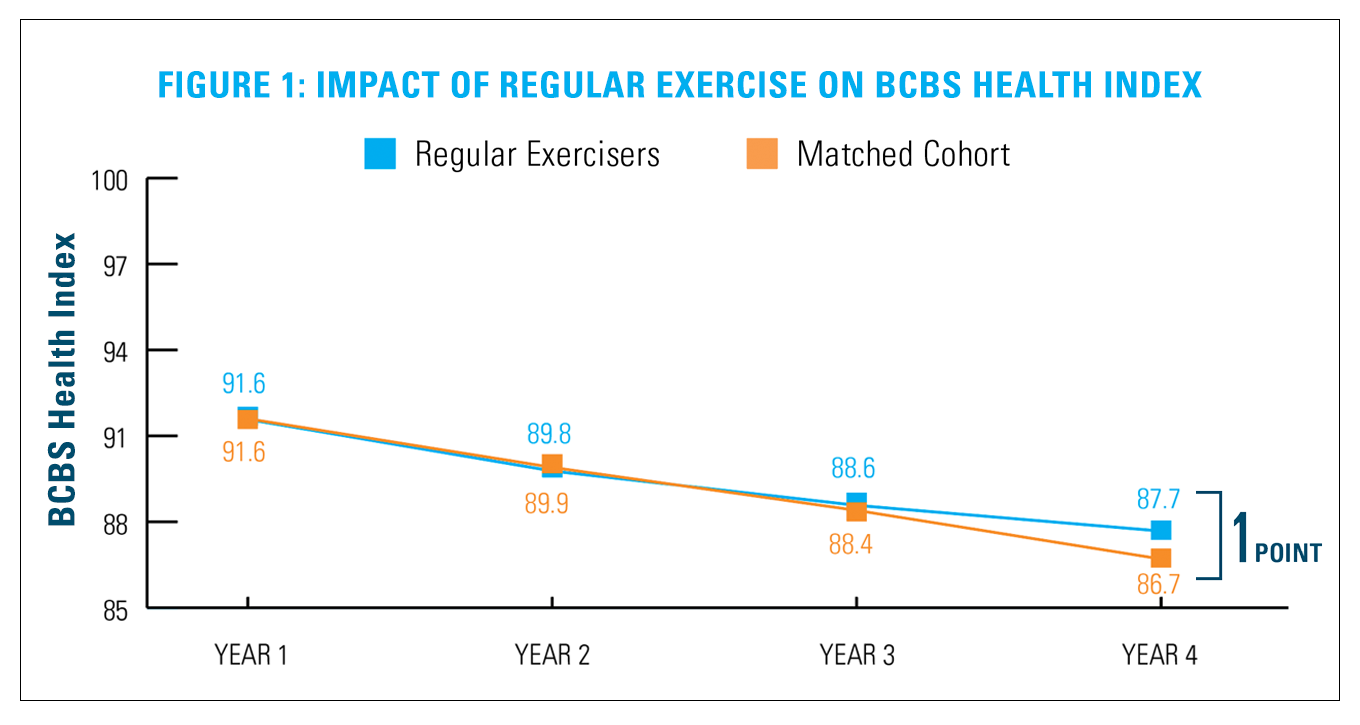 Regular exercise also has a positive impact on healthcare costs. When compared with the matched cohort, regular exercisers had lower healthcare costs — over $4,000 less during the four-year period. (See Figure 2). These lower costs spanned each age group, with Gen Xers and baby boomers seeing the largest reduction in costs. 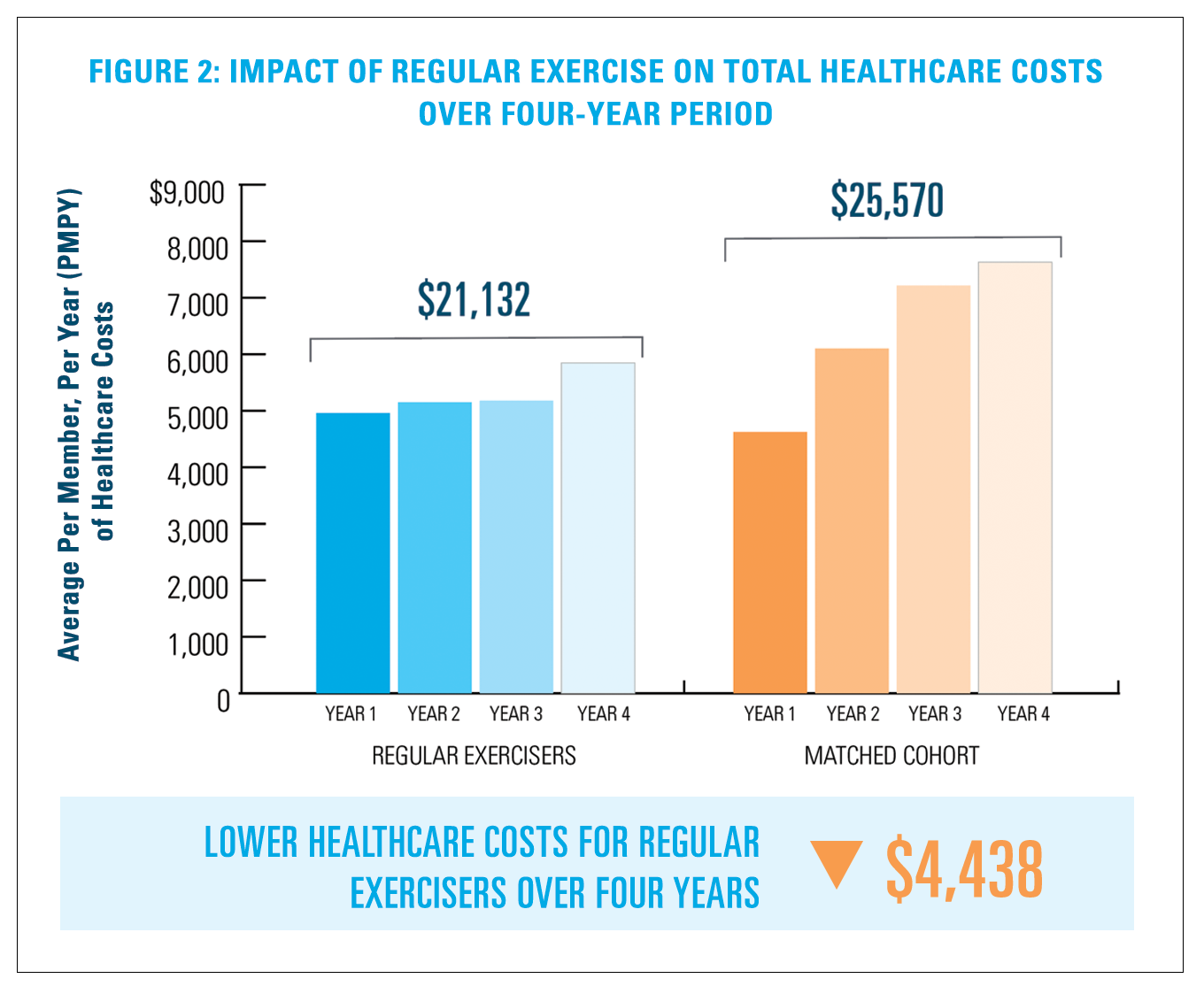 Regular exercise over a sustained period of time has a measurable and positive impact on physical and mental health, as shown by the more favorable Health Index seen among the regular exercise group compared to the matched population, as measured by the BCBS Health Index. The wellness benefit program studied resulted in significant cost savings and ultimately a healthier workforce for the employer.

Blue365® and Tivity Health® have been working together to offer discounted gym memberships to more than 10,000 gyms nationwide since 2013.9 Currently, there are over 220,000 BCBS members who take advantage of this membership through the Blue365 program. This report studied participants who visited the gym as a way to track those who exercised and leveraged data from this population to report on the overall benefits of regular exercise.

The BCBS Health Index
The measure of overall health used in this report is the BCBS Health Index, which is a quantification of the health of populations by a score between zero and 100. A score of 100 indicates a population’s greatest potential lifespan in the absence of disability or premature death. Health impacts, which are health conditions that cause morbidity and mortality, reduce the optimum BCBS Health Index.

Outcomes
Costs are represented by average per member per year (PMPY) costs through the four-year analysis. Conditions are analyzed through a prevalence rate of specific conditions (hypertension, type II diabetes and major depressive disorder). The change in prevalence from year one to year four indicates a difference between Tivity Health gym members and the matched population. All differences across the four years were statistically assessed to determine whether the difference over time was due to random variation in the data. The standard errors of these differences were estimated from the pooled variance of the differences. Standardized z-scores were calculated and then used to derive the one-sided prevalence probability that the difference between the groups would be equal to or less than zero. For the difference in means, a t-score was used. These probabilities are then represented as a percent chance that the result is not due to variance in the data.10