America's opioid epidemic by the numbers. View the infographic.

Responding to the Opioid Epidemic, Community by Community

In this report, the Blue Cross Blue Shield Association (BCBSA), in collaboration with Blue Health Intelligence (BHI), examines opioid prescription rates, opioid use patterns and opioid use disorder among commercially insured Blue Cross Blue Shield (BCBS) members (excluding members diagnosed with cancer or who were undergoing palliative or hospice care). In 2017, BCBSA released a report illustrating the impact of opioid use and opioid use disorder on the health of Americans. This analysis examines progress towards preventing inappropriate prescription opioid use.1,2

While progress has been made, there were 241,900 BCBS members diagnosed with opioid use disorder in 2017. Identifying evidence-based treatment for these members is a priority. 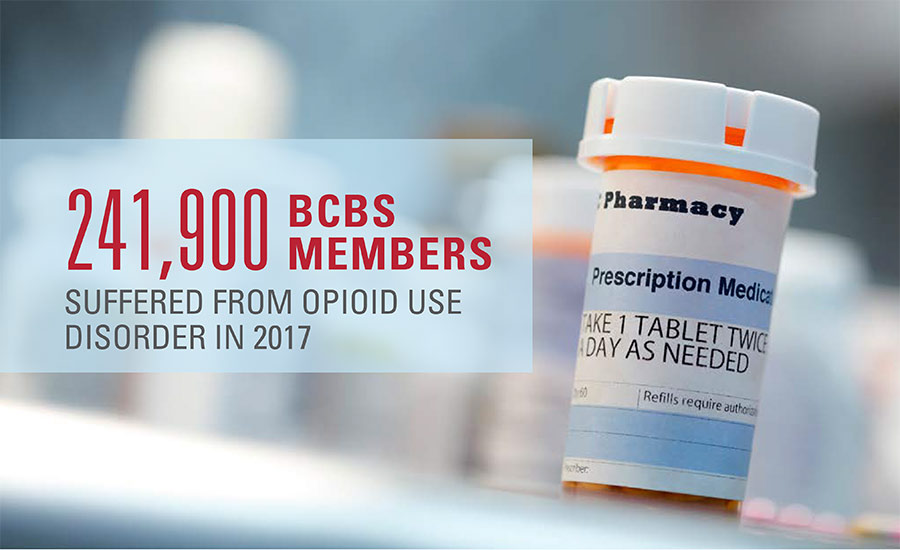 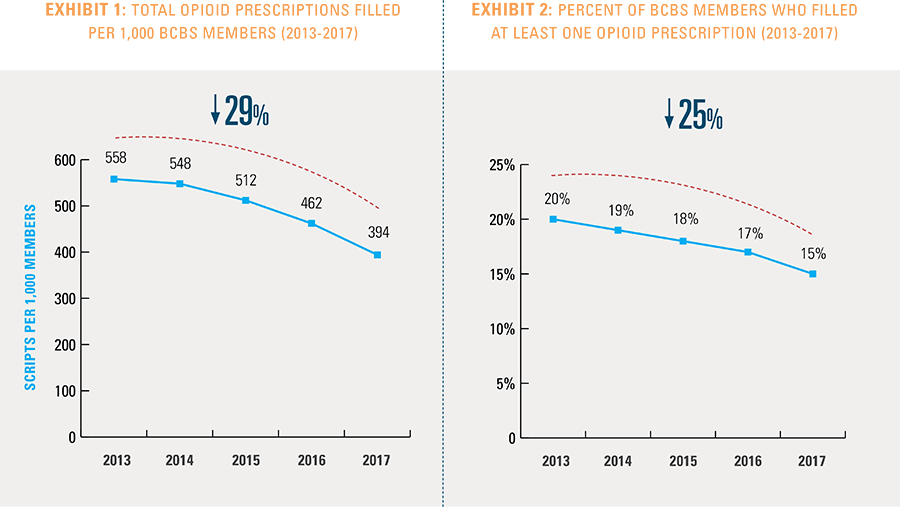 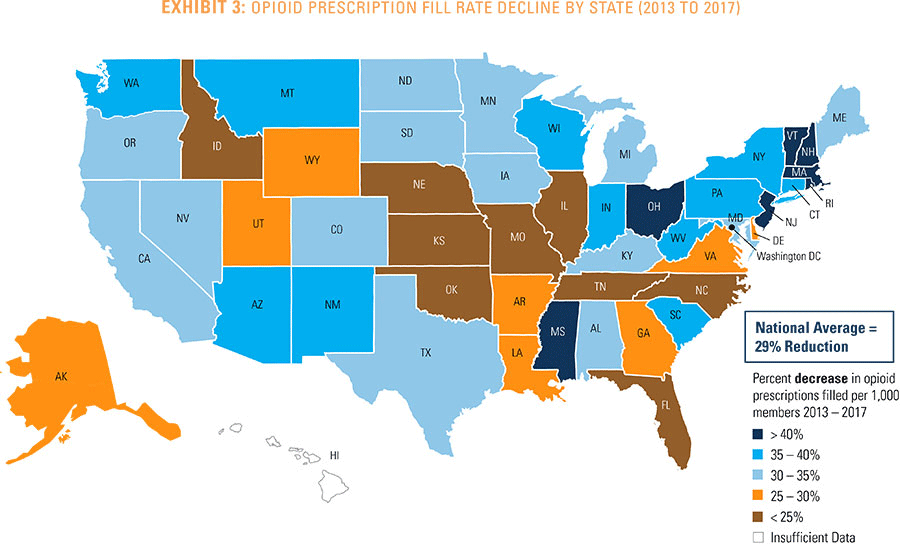 Opioid Use Patterns: Dose and Duration

Progress has been made to reduce the dose and duration of opioid use among BCBS members who were prescribed at least one opioid in a calendar year. When medical professionals prescribe an opioid to a patient, the CDC recommends that the first prescription should have a duration of seven days or less and under 50 morphine milligram equivalents (MME) per dose.4 Any opioid prescription over these recommended guidelines is considered high dose and long duration. 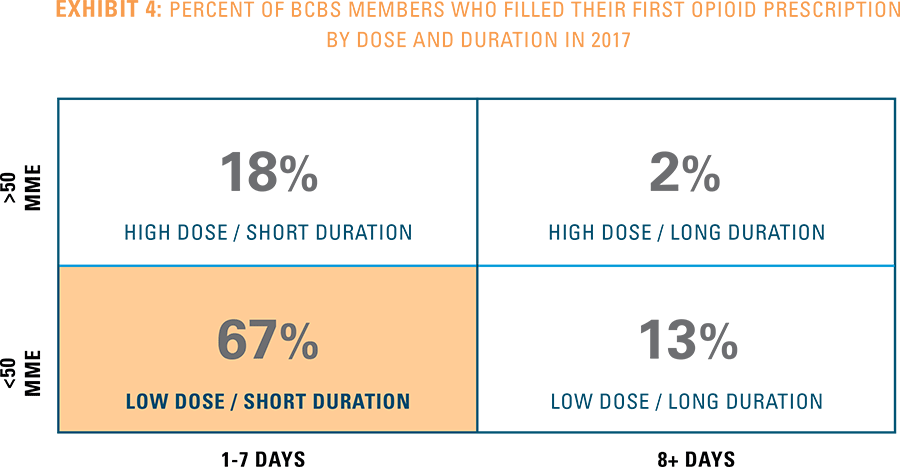 This analysis also introduces a new measure—the total dose and duration for a member filling multiple opioid prescriptions in a calendar year. This metric better identifies individuals at risk for opioid addiction. BCBS members whose total opioid use aligns with the CDC-recommended guidelines increased 6 percent since 2013 (see Exhibit 5). For 45 percent of BCBS members, opioid use was within the CDC-recommended guidelines for both dose and duration.6 More importantly, only 7 percent of BCBS members used opioids at a high dose and for a long duration.

While there have been significant gains in the number of BCBS members with prescriptions that meet the CDC-recommended opioid dose and duration guidelines, there is much work to be done to achieve full adherence for all opioid users. 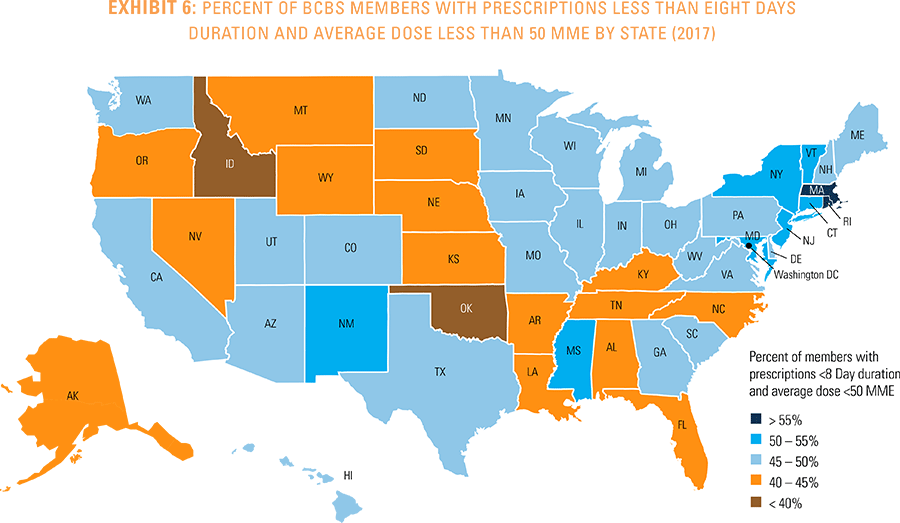 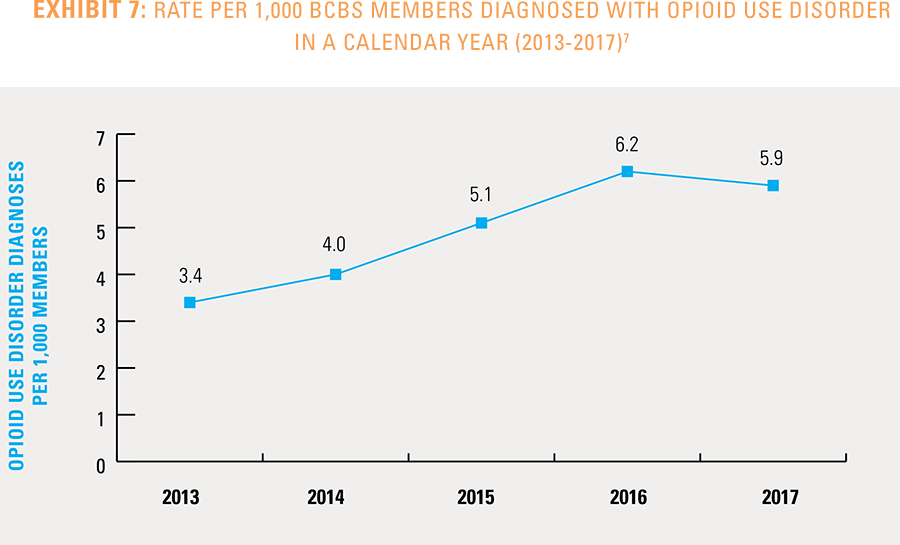 Some states with higher rates of opioid use disorder also demonstrate above average reductions in the number of prescriptions filled from 2013 through 2017. This signals strong prevention efforts underway to curb opioid use in states such as Massachusetts, New Hampshire, West Virginia, New Mexico and Alabama. 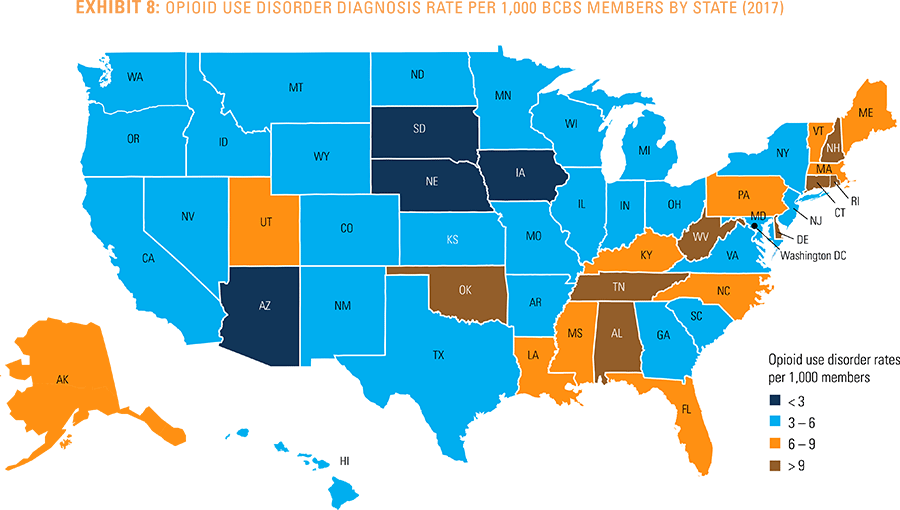 Continued emphasis on this national crisis is needed to further reduce opioid consumption and dependency in the U.S. This report aims to provide support to public and private partners who are addressing this widespread epidemic. While this report demonstrates a reduction in the number of filled opioid prescriptions, it also underscores the substantial number of Americans diagnosed with opioid use disorder, including 241,900 BCBS members. To diminish inappropriate prescription opioid use across the U.S., continued focus remains on curbing inappropriate opioid prescriptions, as well as providing access to effective treatment for all Americans suffering from opioid use disorder.

This is the 21st study of the Blue Cross Blue Shield, The Health of America Report series, a collaboration between Blue Cross Blue Shield Association and Blue Health Intelligence, which uses a market-leading claims database to uncover key trends and insights into healthcare affordability and access to care.

The report examines the medical and pharmacy claims of more than 41 million BCBS commercially insured members per year from 2013 to 2017. BCBS members with a diagnosis of cancer or who are receiving services for palliative or hospice care were excluded. All other eligible BCBS members under age 65 were included in this analysis.

Medical claims were used to measure the number of BCBS members with an ICD code-based diagnosis of opioid use disorder. Rates were computed on a per 1,000 member basis or percentage basis, where noted.

For more information and to read past reports from The Health of America Report series, visit https://www.bcbs.com/the-health-of-america/reports

APPENDIX A
Opioid Use by State (2017)
See Excel document.

APPENDIX B
Opioid Use by MSA (2017)
See Excel document.