At more than $54 billion, spending to treat all orthopedic pain conditions (including pain in the muscles, bones and joints) represents more than 14 percent of overall healthcare spending for commercially insured adult Blue Cross Blue Shield (BCBS) members.1,2 This report identifies trends in cost and quality of care for elective or planned orthopedic surgical procedures (specifically total and partial knee replacements and total hip replacements) by examining the medical claims of BCBS commercially insured members from 2010 through 2017.3  This report is based on analysis of data from Blue Cross Blue Shield Axis® (BCBS Axis), the largest collection of commercial insurance claims data in the U.S. BCBS Axis was completed in 2015 to support cost transparency and data-driven decision making. Cost transparency is key for patients to work with their doctor to compare and consider the best setting of care (whether inpatient or outpatient) and specific facility for these planned procedures. 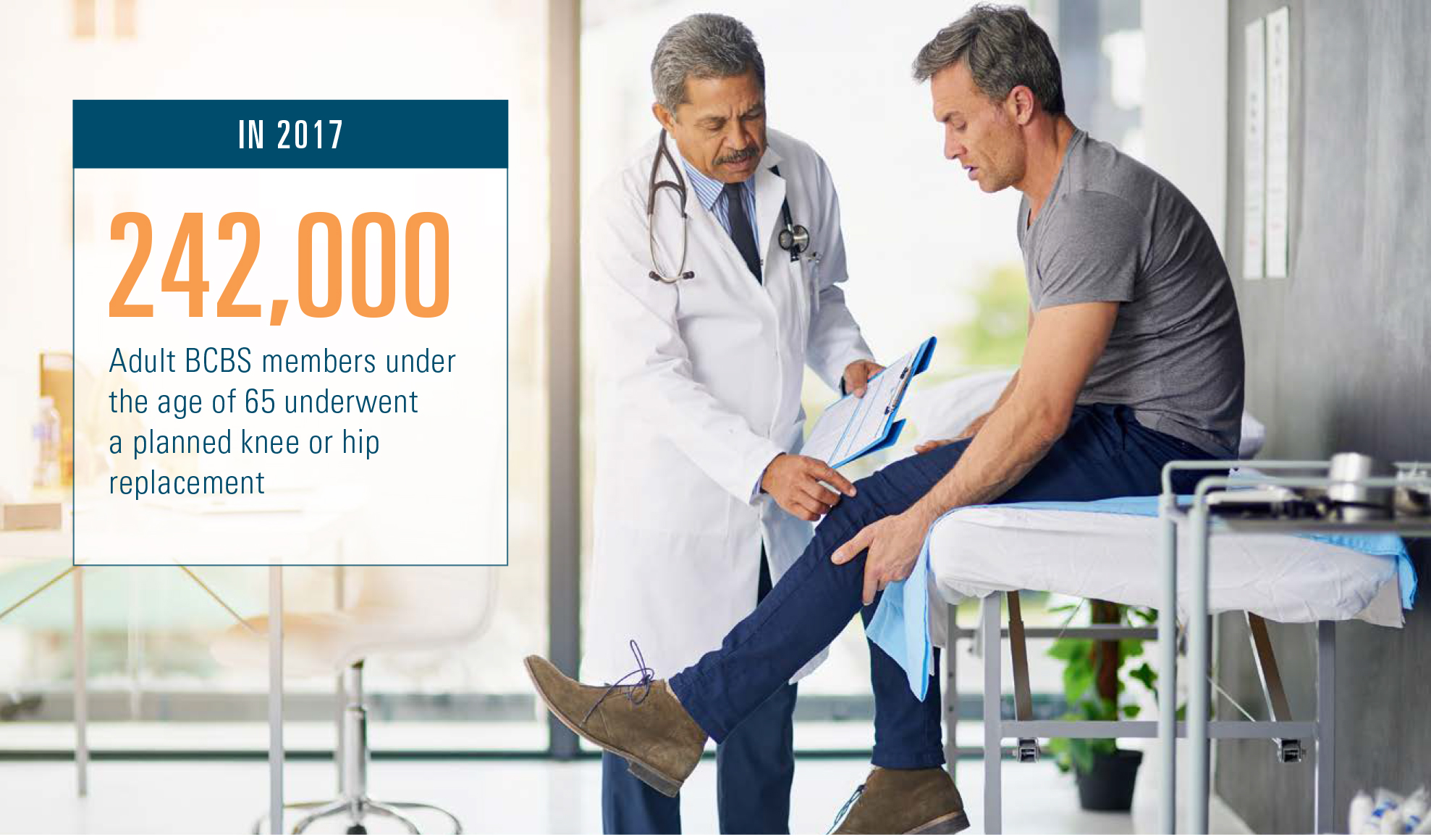 Data Insights, Collaboration and Leadership to Drive Quality of Care

This is the second Health of America Report since 2015 highlighting trends in planned orthopedic procedures for commercially insured BCBS members. As each of these Health of America Reports reveal, utilization and costs of planned knee and hip procedures both continue to rise, impacting overall healthcare costs. In response to these trends, BCBS companies developed solutions to help inform and empower individuals to select quality, affordable sites of care that best meet their needs. Two solutions are detailed below. 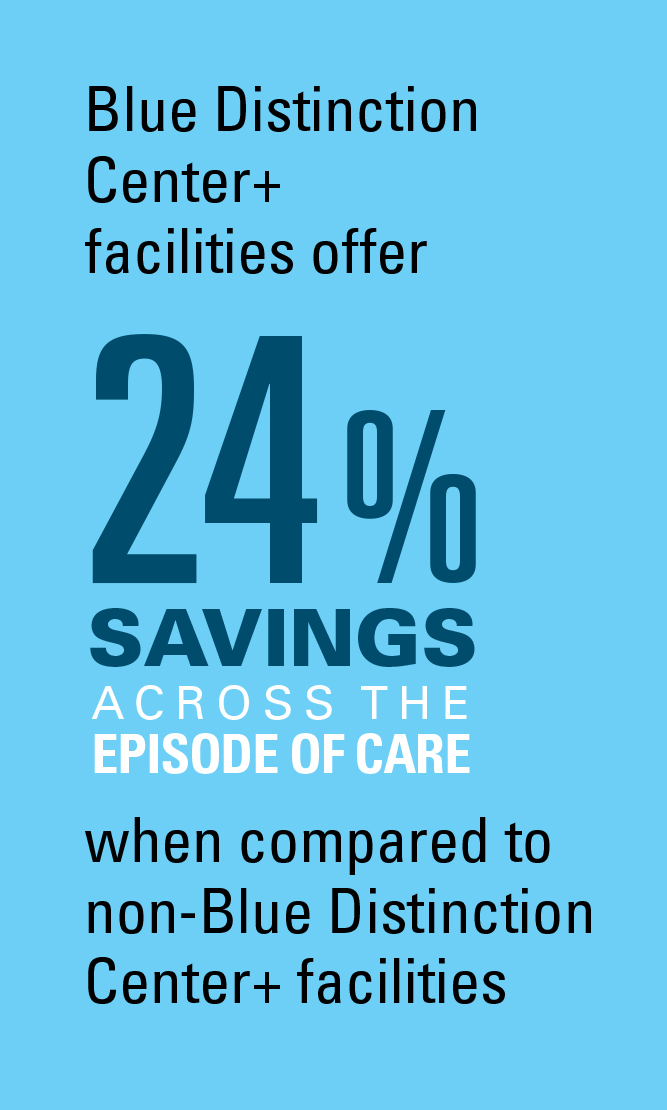 BCBS companies have implemented a number of value-based, care management and cost transparency initiatives in collaboration with employers and local medical communities to help members understand and access the best care to meet their needs.

Increase in Knee and Hip Procedures

Planned orthopedic surgeries are increasingly common among Americans ages 35 to 64, costing more than $25 billion dollars in 2017—an increase of 44 percent over the past eight years.4 Since 2010, prices increased 6 percent for knee procedures and 5 percent for hip procedures. In the same time span, knee and hip replacement rates have increased 17 and 33 percent, respectively.5 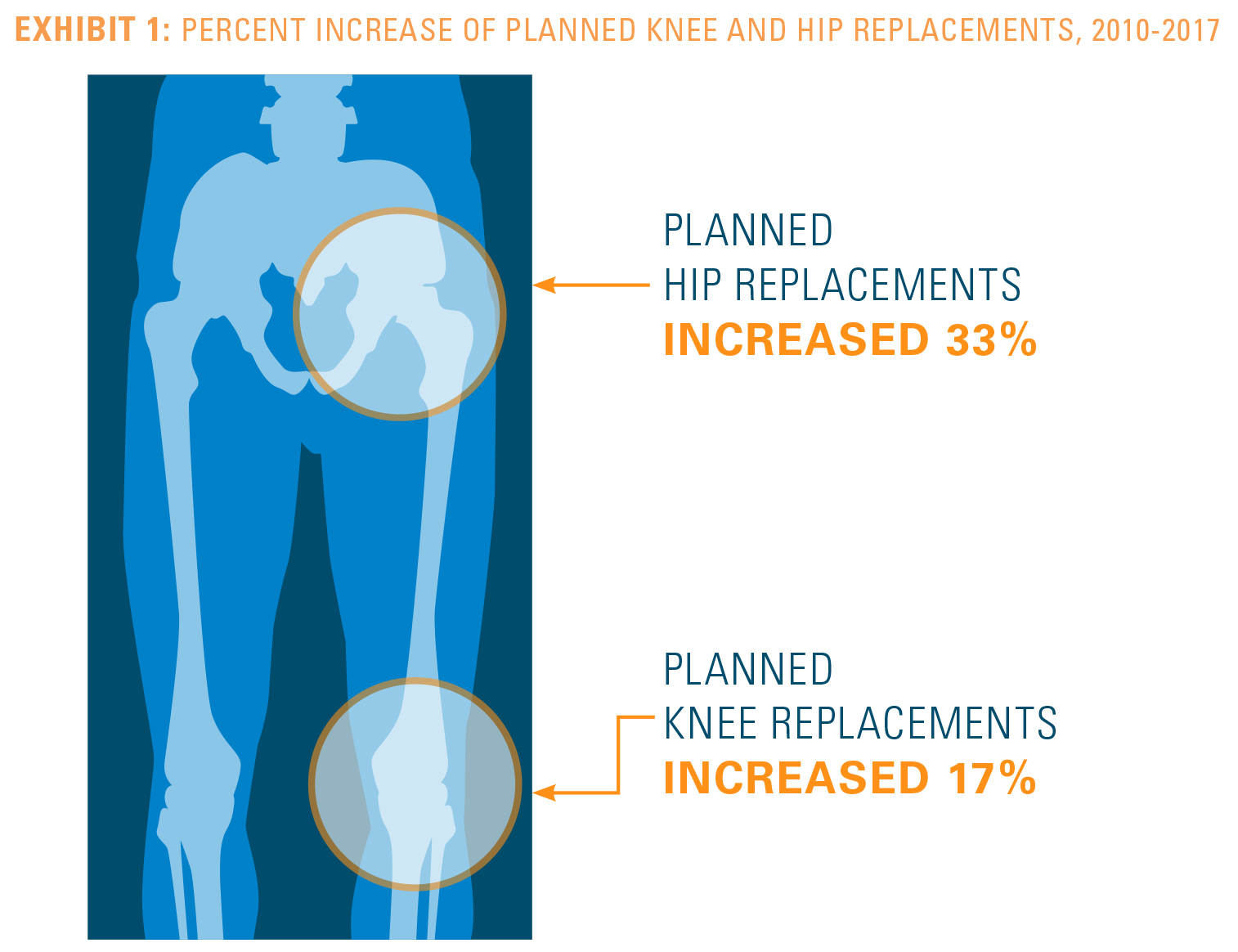 As expected, the largest increases for knee and hip procedures were among those within the 55 to 64 age group from 2010 to 2017. However, both procedures also grew among most of the younger age groups. 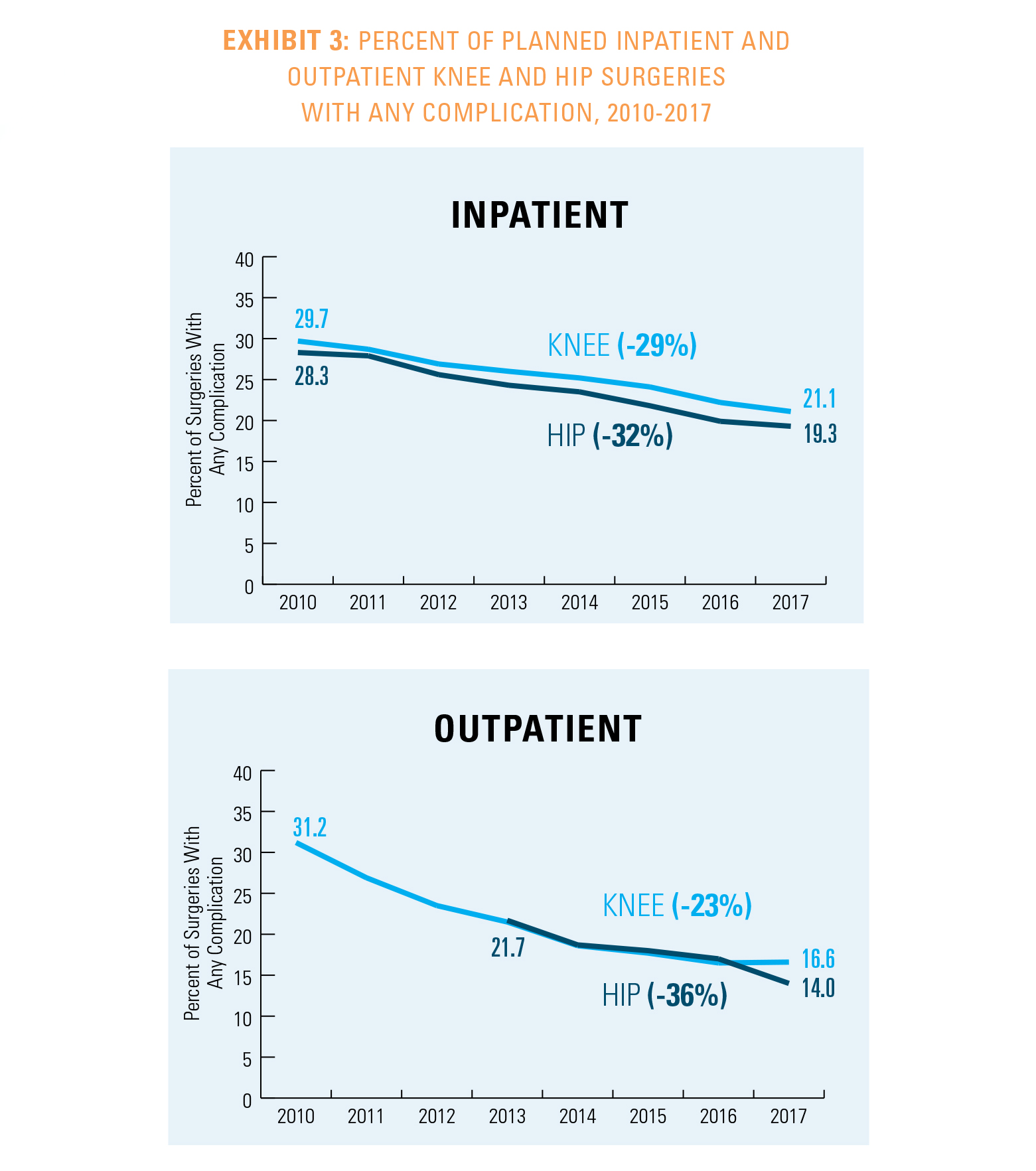 Utilization and Cost of Surgery

Planned knee and hip outpatient procedures are 30 to 40 percent less expensive on average than inpatient procedures.10 To emphasize the differences between costs in each care setting, the analysis in this section presents procedure prices incurred during the surgical visit.11 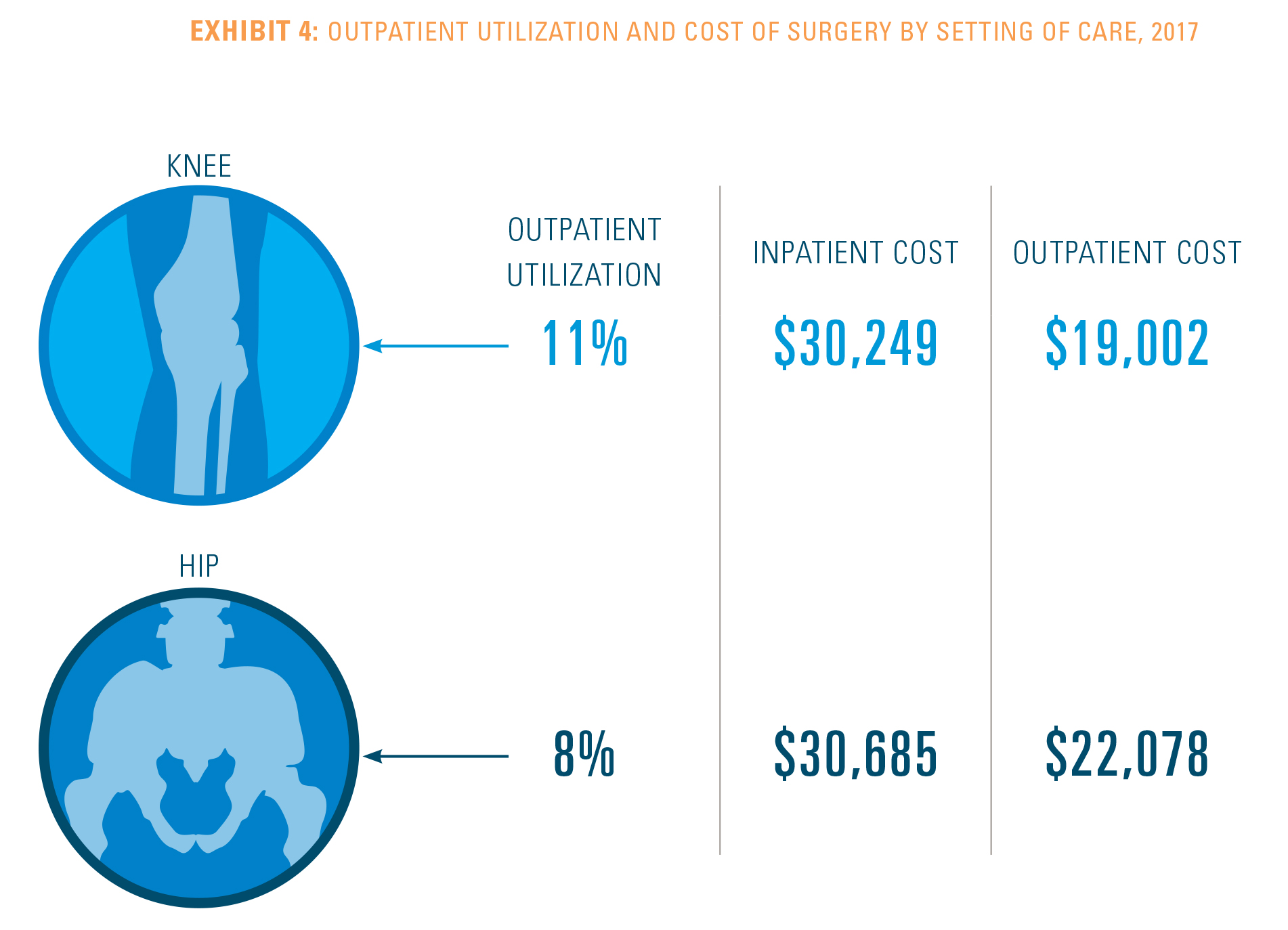 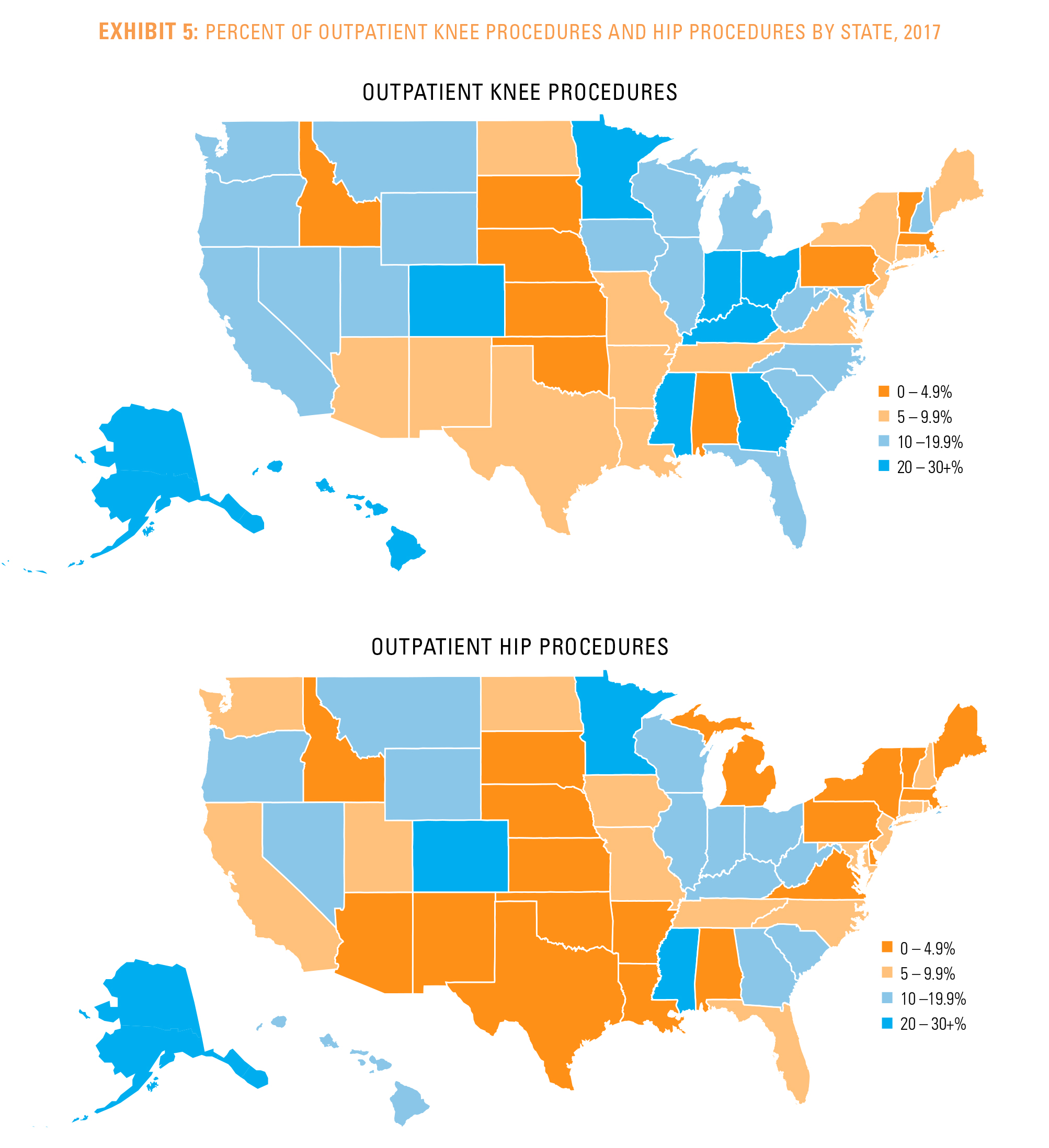 Wide price variation continues to exist for orthopedic procedures across the U.S.14 In 2017, the national average price for a complete episode of orthopedic care was about $34,000, with average costs of $34,513 for inpatient knee replacements and $34,282 for inpatient hip replacements.15,16

Within the largest 100 MSAs, there is also typically a three- to four-fold difference between the highest priced and lowest priced episode of care (“price spread”) for these surgeries. In fact, 30 of the largest MSAs have a price spread greater than $25,000 for knee and hip procedures.

In 2017, the greatest price spread for planned knee replacements occurred in San Antonio, ranging from $22,547 to $88,231 for the same episode of care—more than a three-fold price difference. 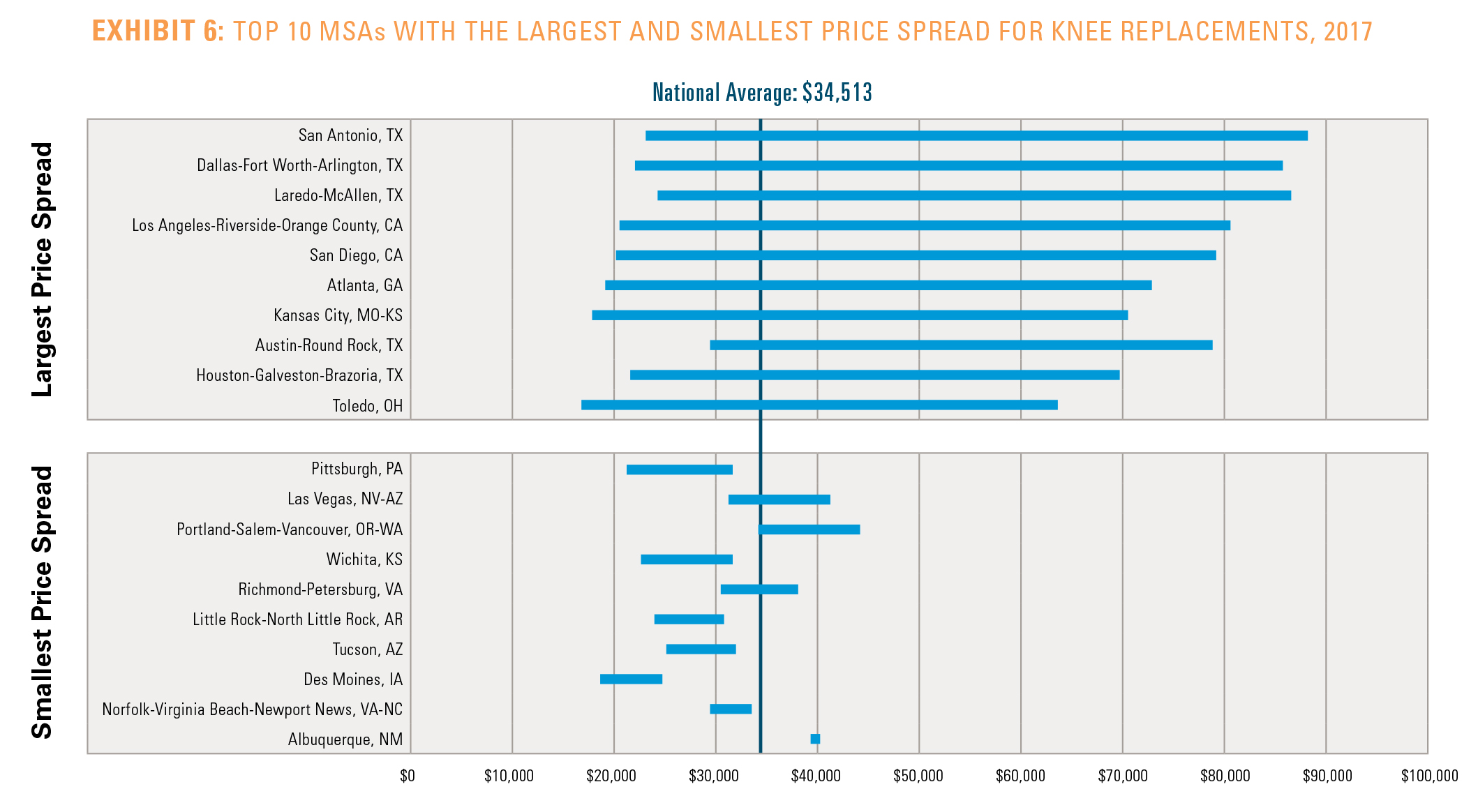 In 2017, Dallas had the greatest price spread for planned hip replacements, ranging from $20,597 to $98,638 for the same episode of care—more than a four-fold price difference. 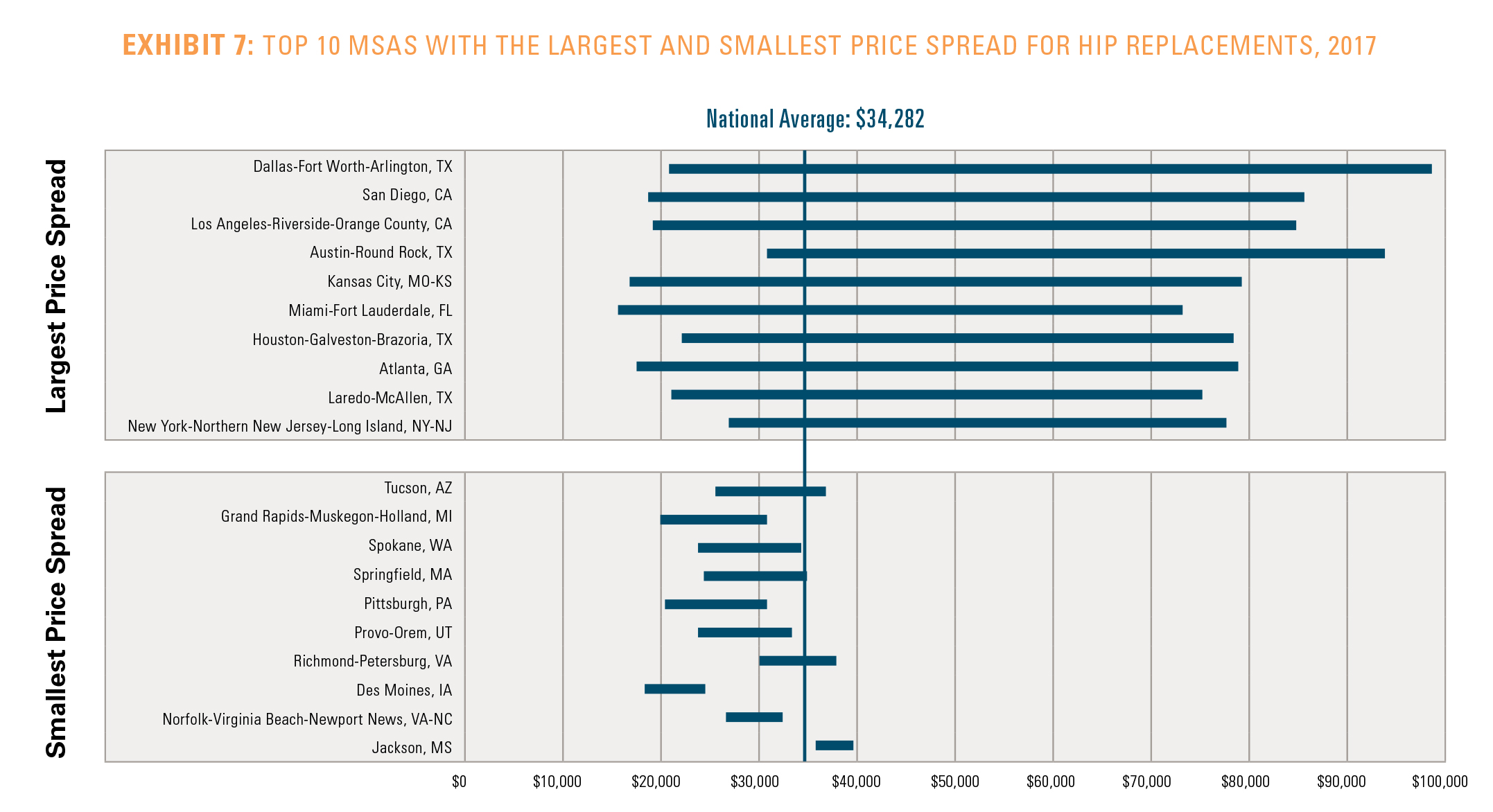 Planned knee and hip replacements are becoming more common among Americans, including people under age 55. Since orthopedic procedures have considerable price variation across the U.S., it is essential that individuals work with physicians to select a site of care that meets their needs for both quality and affordable costs. This report is based on analysis of data from BCBS Axis, the largest collection of commercial insurance claims data in the U.S. BCBS Axis was completed in 2015 to support cost transparency and data-driven decision making.

This is the 23rd study of the Blue Cross Blue Shield, The Health of America Report® series, a collaboration between Blue Cross Blue Shield Association (BCBSA) and Blue Health Intelligence (BHI), which uses a market-leading claims database to uncover key trends and insights in healthcare affordability and access to care. The report was done in partnership with HealthCore, a wholly owned and independently operated health outcomes subsidiary of Anthem, Inc.

This report identifies trends in cost and quality of care for elective or planned orthopedic surgical procedures (specifically knee and hip replacements) by examining the medical claims of more than 48 million Blue Cross and Blue Shield commercially insured members from 2010 through 2017.18 In this analysis, a knee replacement is defined as a total or partial knee replacement or a revision surgery. A hip replacement is defined as a total hip replacement or revision surgery. Inpatient settings include surgeries that are performed in a hospital, whereas outpatient settings include surgeries that are performed in an ambulatory surgery setting or dedicated hospital outpatient unit with no overnight stay.

Total spending amounts were extrapolated from the study population to the entire adult BCBS commercially insured population in 2017 and are adjusted for membership growth in prior years. All dollar amounts have been adjusted to reflect inflation and are presented in 2017 dollars.

In this report, overall orthopedic care costs include any of the following as they relate to musculoskeletal conditions: office visits, imaging tests, non-surgical treatments, planned surgeries and emergency surgeries. Prices for specific elective procedures are measured in two ways. Price at national, state and MSA levels are representative of an entire episode of care and include any tests or treatment in the year prior to surgery, the surgical procedure, device and professional fees and any physical therapy or prescriptions in the 60 days after surgery. For the inpatient to outpatient price comparison, costs before and after the surgery were stripped away to allow a “surgical visit” comparison between settings. This was done, in part, due to the need to obtain provider level pricing. The cost transparency section includes only episodes of care pricing at inpatient facilities due to low reporting volume for the outpatient setting.

All 50 states, the District of Columbia and the 100 most populous MSAs were analyzed, and results are presented in the Appendix. In some cases adjacent MSAs were combined to ensure sufficient data. All prices shown at the state and MSA levels were adjusted for cost of living using Medicare’s Geographic Adjustment Factor.19

For more information and to read past reports from the Health of America Report series, visit www.bcbs.com/the-health-of-america 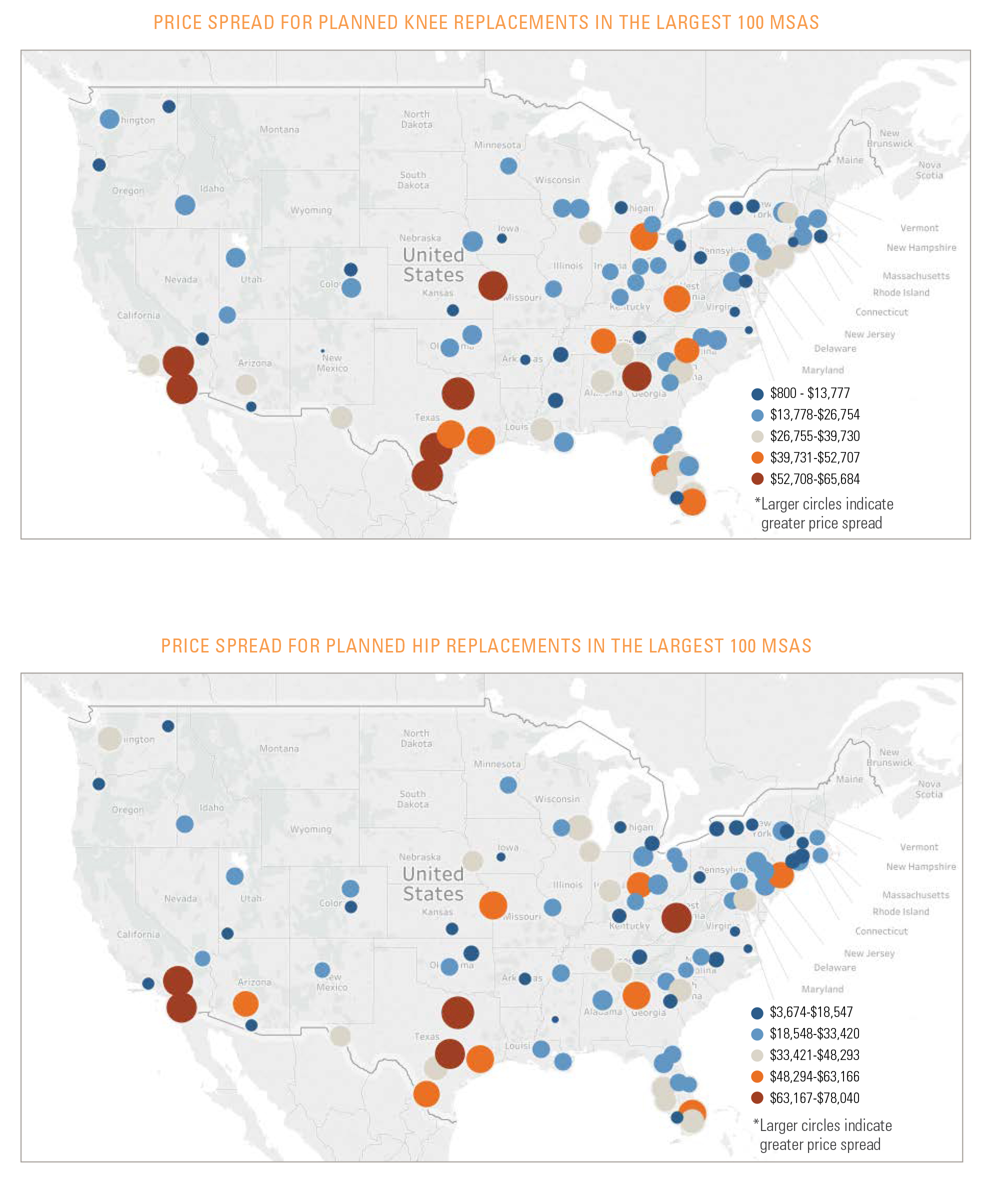 Find a Blue Distinction Center near you

View the infographic on knee and hip replacements

As rising costs put more Americans at risk of not being able to afford their health care, BCBSA has put forth a comprehensive proposal to policymakers to drive legislative change.
Share
Read
Article